Although Arsenal ended up finishing 4th and qualifying for Champions League qualification, there are a few matches that we look back and regret that we didn't get a result or points from. Here's the third.

The third part of our "regrettable matches" series will focus on Arsenal's 0-2 defeat at home in the Champions League, the first Champions League group stage match at the Emirates that Arsenal had lost. It was, like most of October, a dismal performance that came just 3 days after the thoroughly disheartening 1-0 loss against Norwich.

The loss of Arsenal form did coincide with several injuries, with the Arsenal injury list reading Szczesny, Fabianski, Gibbs, Diaby, Walcott (injured as a result of a nasty collision with the San Marino keeper), Oxlade-Chamberlain, Sagna and Wilshere, with the latter two returning the following weekend.

When one reads that line-up now, it seems a little easier to understand why Arsenal lost: Andre Santos was at left back, Aaron Ramsey was at right-wing, and Gervinho was up front. Yet, on that October evening, those issues weren't quite apparent: One of Ramsey's best games of the season had come at right-wing the previous month away at Manchester City, Santos, while causing issues with Podolski's attacking play because of the way he attacked on the inside, wasn't yet the defensive black-hole, and Gervinho was, at the time, Arsenal's top-scorer (!), and thus, one can understand all of Wenger's decisions, particularly the selection of Ramsey on the right. Wenger, I think, had quite quickly come to the conclusion that starting the trio of Podolski, Gervinho and Giroud made Arsenal too direct, and thus, in a search for balance, Wenger put Ramsey on the right and played the striker who was in better form, Gervinho.

Sometimes, though, the best-laid plans backfire, and they backfired in an ugly way. Arsenal continued an ugly trend that they developed against Norwich, and would continue for much of the next couple of months: lots of possession, but a very blunt attack. Against Schalke, Arsenal had 58%, but only had 5 shots, 2 of which came in the final minute. Only one of those shots was on target, with its provider Serge Gnabry, who was making his second appearance for the club. Gnabry's shot came in the final minute, after Schalke had already scored a second, and though it was a good strike, and provided a good chance for Santi Cazorla to score a consolation (he missed), it was, in the end, meaningless. For 92 minutes, Arsenal had not a single shot on target, and, in the 10 minutes between the first and second Schalke goal, they managed to not create a single shot. In chalkboard form, it looks very ugly: 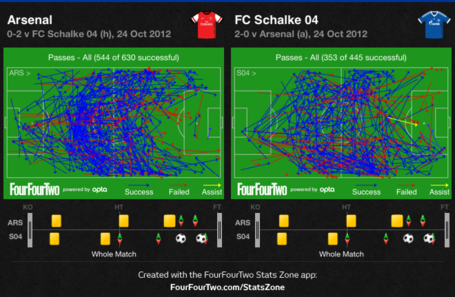 Arsenal had several problems: the speed of passing was not quick enough, nor was the movement of the attacking players sharp enough. Arsenal desperately needed to attack with more width and stretch play, but with Ramsey on the right and Podolski and Santos on the left, that rarely happened. The only real goalscoring chance Arsenal created was from wide, with Podolski's cross along the ground inexplicably put wide of the near post by Gervinho. With Arsenal's movement stymied, Santi Cazorla did very little, and Arsenal never really threatened.

On the other hand, Schalke were devastating on the counter attack, particularly down the right hand side. With Santos sucked in and repeatedly beaten, Jefferson Farfan, the right winger, and Uchida, the right back, created most of Schalke's chances, with Farfan grabbing an assist for the Ibrahim Affelay's point-sealing goal. This was Santos' first real horror show for Arsenal, but he'd never really recover.

At the time of the Schalke defeat, it looked like just a blip, but with Arsenal's creative problems to continue, they started opening up defensively, and instead of being a one-off, the Schalke performance would show up again 6 weeks later, as Arsenal lost at home to Swansea.