Many interesting scenarios that will be played out on Wednesday will help further shape the story of UEFA Champions League Group B. Arsenal hope that a win versus guests Montpellier can see them ease into the coveted Round of 16

Share All sharing options for: Arsenal vs. Montpellier: match preview

Happy early Thanksgiving to you all who reside in the United States (for those outside the United States, I'd apologize to you about having to bear the brunt of the economic burden for our absence in the work place but, let's be honest, we're not helping matters when we're in the work place to begin with. So have fun on Thursday and Friday at your office/work site while the majority of us Americans eat gluttonous portions of food on Thursday and shop our brains out on Friday). I'll be absent a few more days here; I'm writing this away from the office and in the comfort of my home confines as I prepare to host Thanksgiving for the first time ever at my house. If you've ever had the luxury of hosting a family Thanksgiving, I have to tell you: HOW IN THE F*CK DID YOU MANAGE?

My family comes in on Wednesday and we keep a very tidy house. But, hell, it's been a constant race to make sure the food's bought, floors are vacuumed, bathrooms are cleaned again. Heck, I spent this afternoon stringing Christmas lights up (it's mid-November in Minnesota and it was 60 degrees today; one makes sure to get everything that needs to be done outside finished when you have days like today). Tomorrow and Wednesday morning will be more of the same "Are we sure we have X, Y and Z done?" I get pretty stressed out about that stuff so throwing in an Arsenal Champions League match in the middle of the holiday preparations, one in which we need to secure three points to assure passage into the Round of 16, surely won't help my nerves settle any less.

Onto the match. Arsenal come into Wednesday's affair off the heels of a North London Derby victory, a match that saw the squad regain their scoring confidence yet still showed glimpses of the same defensive weaknesses that have plagued them as of late. In their last Champions League match, Arsenal secured a draw against German powerhouse FC Schalke 04, but only after shipping in two goals after opening the first 26 minutes with two goals of their own.

Montpellier's had a rocky start to their first-ever Champions League appearance, losing three of their four matches to date. However, their lone point came from a draw at Schalke, so it's not like they get intimidated on big stages when it counts. While the group records tell stories of successes and failures, Arsenal mustn't look past this match and their opponents. Arsene Wenger's been able to guide the squad into the Round of 16 with ease while at the helm of Arsenal, and this match presents their best and most-comfortable opportunity to do so this season. Anything less than a win, regardless of the Schalke-Olympiakos match, means they will face a must-win situation in their last match in the group stage on the road at the notorious Karaiskaki Stadium in Athens and that's something we all should be praying doesn't happen.

Squad News: There aren't any new injury concerns that weren't present before last weekend's match, however John Cross is reporting that there's a chance Kieran Gibbs and Gervinho feature in this match. While it's great to have further depth with Gervinho's inclusion, having Gibbs back in the starting XI would be massive for the squad. We've had to endure Andre Santos and, when that didn't exactly work out, playing Thomas Vermaelen out of the comfort of his preferred center back position on the left side and it's been no coincidence that the absence of Gibbs coincided with the lack of form displayed by Lukas Podolski. Gibbs' return to the left back role should help booster an attack that saw a bit of life return over last weekend.

Also, this will be Wenger's first match back from his three-match suspension for doing God knows what. Steve Bould, thank you. Now please step aside and continue trying to figure out how to stop the worrying goals allowed count from increasing.

Beer of the Week: A return! I've finally had time to drink a beer! High-five! This week, it's Tyranena's Doubly Down N' Even Dirtier, part of their Brewers Gone Wild! series. 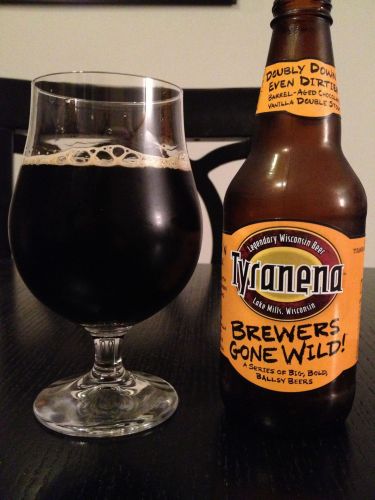 I pulled this from the cellar (aka, spot under the basement steps) after a couple years' age on it. If there's one great thing about winter, it's that it's the perfect time for stouts, porters and double IPA's. This beer's great in that it's a bourbon-barrel aged stout brewed with cocoa nibs and vanilla beans, but only comes in at 7.5%. I love big bourbon-barrel stouts, especially Goose Island's Bourbon County Stout, so it's a bit refreshing to have a stout aged in a similar manner without the booziness that accompanies other like-minded beers. There was little carbonation when I poured this, which can be common with beers that have been sitting for some time, and the lack of the tiny bubbles did little to detract from the massive chocolate nose. Think a white chocolate Hershey's bar. The bourbon sweetness was evident in the taste, along with a vanilla note that was more prevalent than I initially thought (the two Goose Island Vanilla Bourbon County Stout bottles I had displayed little vanilla; perhaps with this beer, the 7.5% ABV helped display the vanilla better than the 13.0% that all variants of the Bourbon County Stout, including Vanilla, did). Overall, this has aged quite well. The bourbon sweetness came through strong as it warmed up, but it lost a bit of the chocolate flavor as it did so. I have one more bottle of this in the basement, and I think I'll open it in another 18-24 months to see how it changes, if at all.