TSF Roundtable: What do Arsenal need to do in January transfer window?

If Wenger isn't done, what should he do in the remaining week in the window?

Share All sharing options for: TSF Roundtable: What do Arsenal need to do in January transfer window?

"If Arsenal had to make another move in the winter window knowing that any major moves aren't going to happen, what player/role do you think is most needed in Arsenal's title push?"

Tough call, but I'd probably go with another wide forward to play RW. Olivier Giroud and Theo Walcott, once they go back to not trying to coexist, can come in and out of the XI to get the job done up top. Right wing has been a conundrum all season. Hypothetically, Alexis Sanchez can play there, but he's shown himself to be much better on the left. Alex Oxlade-Chamberlain was supposed to break out this season. That didn't happen. Aaron Ramsey is solid in that spot, but he's not a world-beater there and is clearly better/needed more in central midfield. Joel Campbell has had a solid season, but the prism through which we view him is obscured by disbelief that he's actually become a decent role player. We need better if we want to challenge for titles.

In my fantasy Arsenal world, Antoine Griezmann was already delivered to London Colney in the first week of the January transfer window as a late Christmas present. In reality, a gettable, creative winger-slash-forward seems to be the most glaring need. Welbeck's still injured (or he could be this), Campbell is this sometimes (but he seems better as a creator than a finisher, and I'm concerned that regular Starting XI duty is wearing on him), and Ox sadly seems to have lost the ability to be this. Making a splash for this kind of player can be risky, admittedly (hi, Memphis!), but if Wenger's got his eye on someone who can change a stale game in the final 20 minutes (like, say, in Sunday's craptacular game against Chelsea), I'd love to see him come to Arsenal.

Thankfully, Arsenal hasn't had the injury curse strike at CB. Per Mertesacker, Laurent Koscielny and Gabriel have avoided injury. I'm hesitant to bank on that down the stretch.

Sunday's loss to Chelsea only emphasized that risk. Mertesacker gone to the red card, the pairing of Koscielny and Gabriel left all of Arsenal's center backs on the pitch. I suppose you could lean on Chambers in a pinch or even play a full back centrally, but a depth signing would help ease my concern for the roster that just looks a bit thin at CB sitting just three-deep.

Honestly, I think Arsenal's biggest need is some kind of fullback help, either on the right or left. I worry about Gibbs, and with Debuchy leaving, Calum Chambers is our backup RB, and I think he's better elsewhere. A creative player would be nice, but I'm not sure we can find one good enough in the window, so that's out. Oh, and we can get one of those lawn stakes for Flamini for like $18, and keep him in a 30' radius around his central position, so that's a good option. 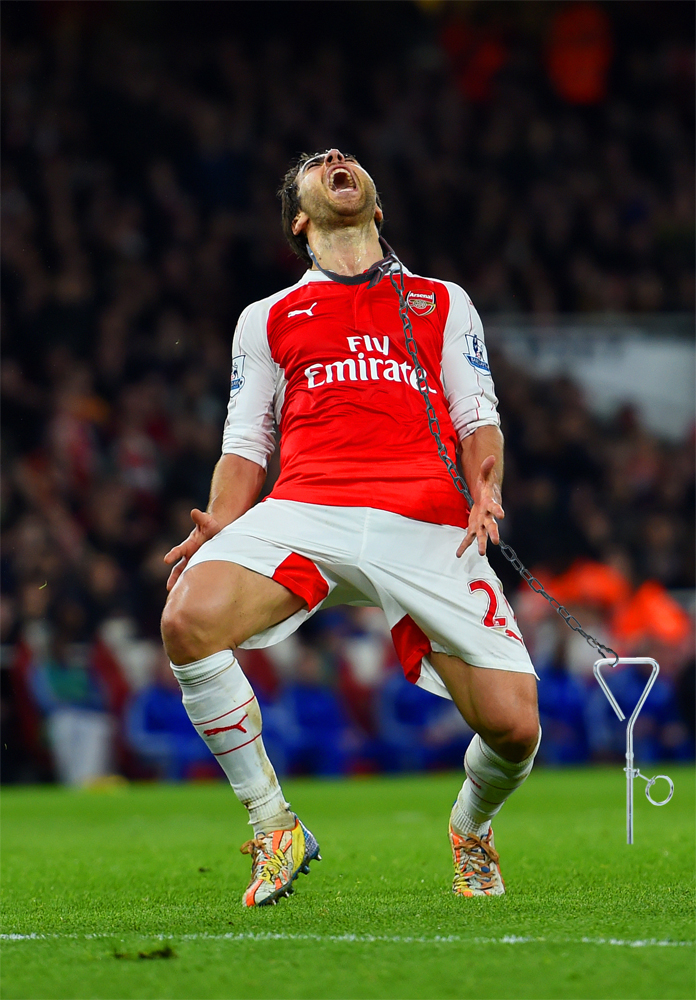 I think the best addition to the side would be someone like a healthy Danny Welbeck, who could contribute both up top in the striker position or as a wide forward/winger. In an ideal world, Danny will come back and be back to his best rather quickly, but I worry about his long-term health after such a long layoff - although I'll readily admit that fear may be unfounded. Danny is basically our only depth up top beyond Olivier Giroud and Theo Walcott, and our list of wide players is long but consists of relatively few players who aren't just central midfielders playing out of position (looking at you, Ramsey, Wilshere, Rosicky). As it stands, Alexis and Campbell are our only wide players who have been terribly productive this year in those positions. Someone who could provide needed depth and backup up top and out wide would be best, in my opinion. TLDR: Sign Reus or #wengerout.

With the addition of Elneny, I think Arsenal already answered their biggest need - a smart passing, controlling DM to act as a tactical contrast to Coquelin and replace the late Arteta (and allow us to finally see the end to the Where's Waldo DM styling of Flamini). So I would suggest what they really need is health. The team is deeper than most give credit to that getting back the likes of Coquelin, Welbeck, Wilshere and Rosicky gives the team the tools to match up against anyone this year in the league. Despite the recent run, I still think this squad is the favourite to win and should be in the running right up to the final day (gird yourselves, folks). Aside from that, if rumours of Debuchy leaving are true, they'll need a long term back up in this position as I'm not certain I trust Chambers in place of Bellerin for a long stretch.

The first piece of this puzzle fell earlier this month, with Arsenal signing Egyptian midfielder Mohamed Elneny from FC Basel. Late last week, Arsene Wenger confirmed that Francis Coquelin's back in training, which means his return should be coming up fairly soon. Once we get Elneny up to speed that means our available center midfield options are Aaron Ramsey, Mathieu Flamini, Calum Chambers, Elneny, and Coquelin. Mikel Arteta would be in discussion here, but he's unfortunately shown he's not a healthy enough option at this time. And Alex Oxlade-Chamberlain simply doesn't show the traits needed to become a trusted midfielder. Out of these, I trust Ramsey, potentially Elneny, I guess Coquelin, and maybe Chambers (if he can get matches in). Yesterday's match versus Chelsea showed us that our depth in the midfield isn't strong enough to get us the points needed to contend for the league title, that our attack depends on our ability to control this part of the pitch. One more signing here, one who can be trusted to keep the consistency we expect, would go a very long way.

Arsenal aren't far off. They're not dangerously short of starters in any one area, and it's not like they're hanging on to their title credentials by a thread, so put that narrative down for a minute, because despite what you saw yesterday (remember, they played with 10 men for 70 minutes), and what you saw against Stoke (no Özil, no Alexis), Arsenal are still very much in a very tight title race. When you look at the starting 11 for Arsenal, it's good; there's a need for an upgrade at DM, probably, but otherwise, there's not a lot of obvious holes.

What Arsenal mostly need is more center backs - not to directly replace the Per/Laurent combo, because I firmly believe that's one of the best CB pairings in the league (although they are dropping off a bit from last year), but because the Per/Laurent combo are getting old and the end of the horizon is approaching for at least one of them. Per's a rock, but he's even slower than he has been, and Laurent has made some uncharacteristic mistakes this season, so it can't hurt to have someone in camp that can push

Gabriel's OK, but he's only one person; I would feel much more comfortable with at least one other option that is an actual CB as opposed to a defender playing CB in an emergency.

I honestly don't think Arsenal need much more than what they already have, unless you want to count a bacta tank or a bag of senzu beans as an addition. We got Mohamed Elneny, and hopefully that's the only augmentation the squad needs to win the title. But if you pressed me, and I couldn't say something unreasonable like "get medical equipment from Star Wars" or "kidnap Neymar" I'd probably say we should target another creator to give poor Mesut Özil some rest. He's really been tasked by the absences of Santi Cazorla, Jack Wilshere, and Tomas Rosicky. None of them are really a pure #10 at this point in their careers either, so adding someone who can handle it adeptly would be nice.