Share All sharing options for: Stan Kroenke discloses information about the £3 million fee

(At the Arsenal General Meeting, where the tension is getting thicker by the minute)

(whispering) Don't let me forget to tell you about that one time where I snorted a three-foot line of ground-up Sweet Tarts.

Excuse me sirs, but can we get on with the proceedings?

Sure, boss, whatever you want.

My name is Tim Payton, and as you probably know I'm the Super-Duper Spectacular Supreme Leader of the Most Excellent Arsenal Supporters Trust.

Our creation back in 2003 was to preserve the involvement and interest in supporters who own shares of Arsenal Football Club, and to be a leading voice for the group at matters such as these.

Currently, we have more than 850 members in the AST, many of whom...

(muttering to himself) Want to leap off high bridges whenever they hear you talk?

...are individual shareholders of Arsenal.  I got that information about us directly from our website; I'll hazard a guess that you haven't been to it before, right? 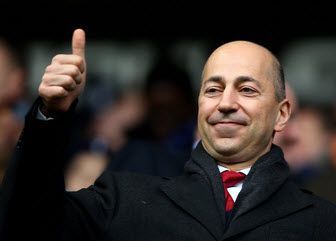 Right, well.  There's this matter that's gotten us at the AST all aflutter these past few weeks.

It would very much be appreciated if we got more information on the £3 million "strategic and advisory" fee that the club paid to KSE, LLC.  It was our assumption that money wouldn't be coming out of the club and into your pocket, Mr. Kroenke.

An explanation into what this was, and what it means going forward, would be welcomed right now.

I'm afraid that Mr. Kroenke will not be able to answer that question.

WHOA WHOA WHOA.  Now hold on here a minute, I should clarify something.  An explanation into this fee wouldn't be WELCOMED so much as we're DEMANDING it.

I'm really sorry, but as I said, Mr. Kroenke will not be able to -

(Stan interrupts Ivan, taps him on the arm, and motions him close)

(whispering) Maybe we should be transparent about this?  Dude's not going to drop this until we tell him what this was about.

(whispering) But I thought we agreed to deflect any questions pertaining to this fee?  Yes?

(whispering) Yeah, we did, but man, I got a wife who nags the shit out of me all the time about why I keep spending money at the Sunglass Hut on bitchin' shades and dope cans at Best Buy and what have you.

(whispering) I don't need a second wife in my life.  Dude is nagging, and I want to put an end to this.

OK, so an explanation?  Like, as in the truth?

(lowering his head and shielding his eyes)

So one day last March, I get a phone call from Sir Chips Keswick.  He asks me how the weather is in Colorado, how I'm doing, how the Avalanche are playing, and I'm getting this weird sense from him that he's wanting to ask me about something.

(already thinking that, no matter what he's going to be told, it's a lie) Uh-huh, go on.

So after answering his questions, I ask him "Maybe I'm wrong here, but I'm getting this feeling that you want something.  What's up, dude?"

And he hems and haws, and starts to bluster, and I'm getting impatient at this point.  I tell him "Chips, what the hell is up, man?"

And I'm, of course, trying my hardest not to laugh in the phone, but I let him keep going on.

He continues on.  "As you know, I'm not the greatest with computers."  This is true, by the way.  I went to show him a bum fight on YouTube this one time, and the motherfucker took the mouse and ran it over the screen, thinking that's how you use it!  Like, seriously man, I was thinking to myself "Have you been frozen for the last thirty years?"

Turns out dude has a thing for Lisa Ann.  Like, obsessed.

I mean, I can't fault him for that, since I've once stood outside her house in the bushes late at night wearing this exact getup I have on now, peering through her windows like a pervert.

Man, you should have heard him.  "You can't go sending an invoice for this kind of matter to my house, ARE YOU NUTS?  My wife will pester me about it, and she can't find out about this!  No way!"

So I tell him that if I can't bill him for it, then I got to bill someone.  He comes up with the idea of billing the club, marking it "strategic and advisory services", and hiding it deep in the financial reports.  So, there you have it.

No lie, my man.  That's the honest-to-God truth.