Don't care to revisit your college economic classes? Then take a look below to get the summary on Ramble's always-anticipated Arsenal financial report post

Before we begin, please note that the financial reports Arsenal compile and release this time of the year are for the end of their fiscal year, which ends on May 31st of every year.  The assumption for their fiscal year ending on this date, I gather, is that it's the last day of the last month of their fixture calendar that also contains all of the season ticket renewals and purchases collected for the upcoming season.  When you see media outlets discussing Arsenal financial results and then talking about the summer transfer activity that immediately occurred, or a lack thereof, feel free to disregard the rest of the article's contents.

Also to note: the club also releases first-half financial reports ending the last day of November sometime in February of each year.  Numbers, especially, the almighty Arsenal cash reserve, are down from these particular financial reports because they take into account the summer activity that the reports ending the last day of May didn't, but most importantly the season ticket renewal money has already been accounted for.

Anyway, with those disclaimers in place, moving on.

I enjoy looking at financial numbers since I go to great lengths to ground assessments through data, but I'm by no means an expert.  So it's always a huge sigh of relief to see Swiss Ramble dissect the financial health of various clubs and leagues around Europe.  He's gone on an extended blogging hiatus as of late, so I was extremely happy to see him come out of his slumber and type up thousands of words on Arsenal's latest financial report and how it stacks up to our competition.

I'll summarize the majority of it for you, but I highly-encourage you to at least click on the link above if only to give Swiss a page view; he's virtually-indispensable as a trusted resource when it comes to Arsenal and their financial health (the alternative is the Arsenal Supporters Trust, so I guess my encouragement's now outright plead for you to do so), and I'd love to see him crop out twice a year to comment on these matters.

That figure is up significantly from £155 million in the last financial report ending November 30, 2013.  While the club would never, ever repay the balance of the Emirates Stadium debt off early thanks to penalties associated with such a thing, along with the terms being extremely manageable (£19 million a year; £12 million of that being interest), they are literally only £32 million away from being able to pay their mortgage off in cash alone.  Think about that for a second.

For the 12th straight year, Arsenal reported an end-of-year profit.  As Swiss states, that's virtually unheard of in this sport these days as successes are normally bought against future club revenues.  So while you might roll your eyes and say something along the lines of winning the ledger battle isn't nearly as important as winning actual, meaningful matches, look at this: 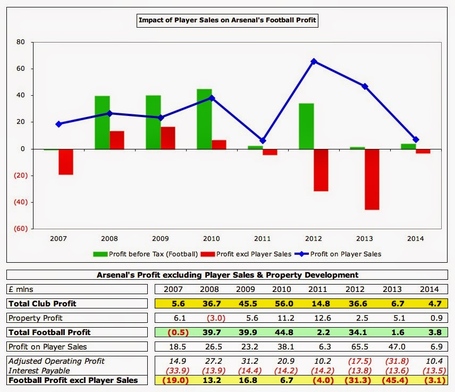 In years 2007-2013, the club totaled a profit of £197.2 million off of player sales and property development.  With greater, more enriching commercial partnerships on board along with foreign TV money arriving in multiple armored trucks that no doubt are adorned with the US flag on each and every single one of them, the club's managed to turn a reasonable profit in 2014 while only collecting £7.8 million from player sales and property development. This is largely due to an exponential increase in 2014 in broadcasting revenues (up £34.8 million from 2013), commercial revenues (up £14.8 million), and match day revenues (up £7.4 million). 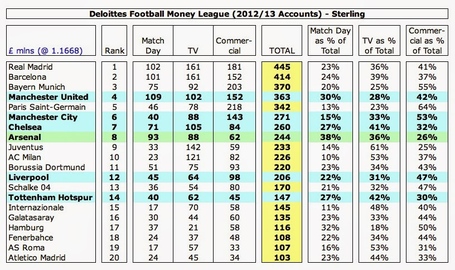 The only club in the top 20 of Deloitte's Football Money League in 2012/13 who earned a lower percentage of commercial revenue to their total revenues was, curiously, Juventus.  Every single other club listed here has managed to extract as much money from advertisers, sponsors, and other trusted partnerships to earn revenue and, even more important, promote their brand as much as possible.

This has been a glaring weakness within the club for far too long now given Arsenal's stature, respect, and successful history, so with player sales and property development nearing its end as the club's golden goose it's one's hope this is the turning point towards securing additional commercial agreements in the short-term future.

The heartening thing to remember with the £77 million figure is that it doesn't take into account the new Puma kit deal (it does, however, take into account the club's renewed sponsorship with Emirates), so this figure will be going up even higher - £22 million, to be exact - with the next financial reports.  However, it's little secret that other competing clubs are continuing, at a break-neck pace, to accumulate new commercials deals of their own.  Arsenal's increased their commercial revenue 60% in the last five years, but seeing how they still lag woefully behind others, they shouldn't rest on their last two, big partnerships and call it a day.  Hopefully Arsenal are hard at work at keeping up with the Manchester Uniteds, Borussia Dortmunds, and, heck, even the Liverpools of the football world in this regard.

Further incentive to Arsenal continuing to secure more lucrative commercial deals in the future rests within a rule that I, honestly, didn't know existed until I read this post.  In the EPL's own Financial Fair Play regulations, clubs are restricted to how much money they can spend from TV deals on wages.  If a club exceeds a total of £52 million in wages, they can only increase their yearly wages by £4 million over three years.  The caveat with this is that sponsorship money is excluded, so if a club can find other means to pad their coffers besides the TV money, then they are free to spend more in wages besides the £4 million yearly allotment.  Confusing, but it boils down to Arsenal needing to secure more sponsorships.

Swiss Ramble astutely points out, in the last five years, wages have gone up £62 million while revenue has gone up £74 million.  Also, the wages to turnover ratio has dropped from 64% to 56% in 2014, but that wages actually increased in 2013/14 (from £154 million to £166 million) thanks to new contracts for Mesut Ozil, and extensions Jack Wilshere, Theo Walcott, Aaron Ramsey, Alex Oxlade-Chamberlain, Kieran Gibbs, and Carl Jenkinson.

Swiss then goes ahead and factors in the Puma money mentioned above, money that isn't factored into these figures, and surmises that with total turnover around £320 million, and a wage to turnover ratio of a round 60%, Arsenal can easily afford a total wage bill of £192 million, or £26 million more, in next year's financial reports without wandering too far away from their ongoing wages and revenue relationship.  I'll let you arrive at conclusions about how Arsenal will approach the next couple transfer windows, but it's safe to say that they can afford to spend without making a dent in their accounts.

Really, if you're one of the very few fans left on this planet who's worried about the financial health of Arsenal, fear not.  Sure, these numbers are continually inflated thanks to ongoing participation in the Champions League, and that the EPL is more competitive than ever, but the club's main weakness isn't TV money - or the threat of disappearing Champions League money disappearing if Arsenal fail to qualify - these days.  It's their inability to outstrip their fellow competitors in commercial agreements in relation to total revenues earned.  They've left, for years now, money on the table that's been quickly gobbled up by other clubs who don't have shiny, world-class stadiums that can pay for itself and then some.  I've said it for a few years now, that I'm not worried about the club's ability to continue to grow their brand, but the longer we fall behind other clubs in organically raising money through partnerships in the business community the shorter my patience is with their lack of commercial growth.

However, I'm not going to let that cloud the fact that the club's turned a corner, through grounded data, in regards to how it conducts business pertaining to players coming in and, most importantly, not leaving.  The club has shown a very real willingness to spend money where it feels it's needed, while being able to afford to extend current, crucial players.  It's only going to get better and more aggressive in the next 12-18 months.

While there's certainly work to be done in boardrooms to expand the club's brand, they've managed to take the narrative that the club doesn't spend money out behind the barn and put three shots in its tired, bothersome neck.