Arsenal's new system is not working as one may have hoped.

Share All sharing options for: Observations about Arsenal's new 4-1-4-1 formation

Viewed dispassionately, Arsenal's performance against Everton was not as poor as perceived at the time. While it took 83 minutes for Arsenal to finally score, the completion of a two-goal comeback was a fair result, especially given Arsenal's second-half revival. Arsenal have played better though, and after a promising 3-0 win against Manchester City in the Community Shield, there was a late 2-1 win against Crystal Palace and a limp 0-0 draw in Istanbul. The attacking movement has been laboured, the passing hasn't been crisp and Arsenal have rarely looked threatening. There are a number of reasons for that: Arsenal effectively have a new right hand side, with Mathieu Debuchy, Alexis Sánchez is new and Arsenal are adjusting to a new formation. It is the latter that has provided the most salient and fixable issue, as Arsène Wenger switched from the 4-2-3-1 formation that has worked for a 4-1-4-1/4-3-3 hybrid. Such themes only continued away at Leicester, where Arsenal were perhaps fortunate not to lose.

Playing 4-1-4-1 solves one issue: how to fit Jack Wilshere and Aaron Ramsey into midfield without making one of them play as a defensive midfielder. It made sense, too, with Mesut Özil absent, Santi Cazorla perfectly comfortable as a wide playmaker (which he has done for the majority of his career) and the need to see Wilshere develop. Against Manchester City it worked because Arsenal were able to play on the counter attack and exploit midfield space that City left open. Against Crystal Palace and Besiktas, it didn't work as well as Palace and Besiktas denied Arsenal space, and countered as Arsenal pushed forward for a decisive goal; Leicester did very much the same thing, hitting passes particularly down Arsenal's right hand side, where Mathieu Debuchy vacates a large amount of space.

Özil's return, though, saw him shifted out to the left. Even when Wilshere was rested against Leicester, Arsenal persisted with Özil on the left of a  4-1-4-1 formation, an indication that, barring fitness-related reasons, the shape will continue for the time being. Özil himself made it clear that while he was happy to do any role for the team, he feels he is better from the right, and one of the best from the middle. The lack of a #10 also becomes an issue when Arsenal are faced by defences that constrict space on the edge of the penalty area. The formation can work if Arsenal play on the counter-attack, and thus Arsenal's set-up made some sense today against Manchester City at the Emirates. 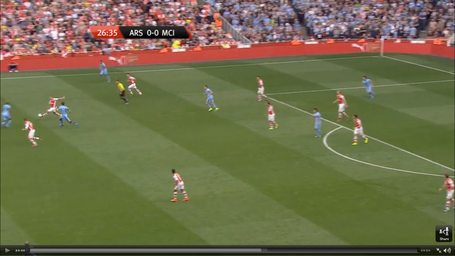 Here, Arsenal are in a good defensive position and have won the ball back and are countering.

On the counter attack, the starting positioning of the attacking players takes less importance, as the fluidity of the attack is more important. In terms of limiting the frequency of dangerous opposition counter attacks, it works, with the slight change in midfield giving more protection if the team is back defending, allowing the holding player to sweep behind. In possession, though, issues can arise, leading to goals like Everton's second, Leicester's equaliser and Sergio Agüero's opening goal today. In all three, the fullbacks had pushed forward, and with Arsenal being frustrated by a defence that was sitting back, and without clearly defined roles and needing goals, the two central midfielders push further up, not only making the build-up disjointed but also creating too much space for the holding midfielders and the centre backs to cover. 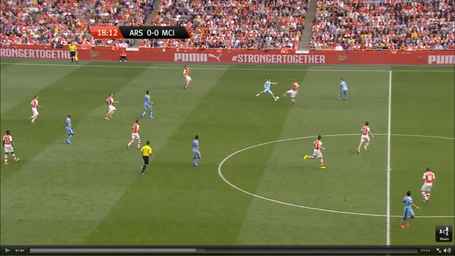 Here, Arsenal's defence has had to push up because of the midfield. Laurent Koscielny, Mathieu Flamini and Per Mertesacker are in City's half, with Monreal a little deeper. Mathieu Debuchy is advanced. Luckily, Arsenal win the ball back. 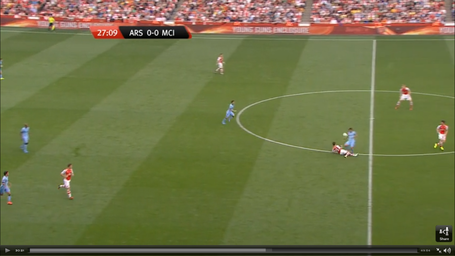 Right before City's goal. Aaron Ramsey is tracking back, with Monreal and Debuchy advanced. Were Ramsey in a deeper position to begin with, as he would more likely be in a 4-2-3-1, Arsenal would have a better shape.

Aaron Ramsey's form, despite scoring three times, has suffered as well. Part of this is the natural ebb and flow of form that all players go through, but his dip in form is also due to the change of shape. Ramsey's passing is not as quick as it usually is, and part of this is the absence of a #10. Ramsey likes to pass from deep, and run forward into space, playing combinations and one-twos. He can't do this with Wilshere, who likes to occupy the same space, with one example being when the two went for the same pass to Danny Welbeck, and it also affects the space that Ramsey has to make runs in: with less space being vacated by forward players, it makes it somewhat easier to track his runs.

Arsenal can, and probably will adjust to this new shape, because Arsenal's midfielders and flexible and talented footballers. As they continue to play in this shape, the defensive understanding should improve, especially as Arsenal play on the counter attack. It may continue to be an issue against the non-big clubs, with the lack of a 10 and space to counter causing too many issues. Arsenal have a good, balanced system against the sides that finished 6th-20th last season: it is 4-2-3-1, and it has been proven to work, with the only shortfall from a lack of pace rectified by the addition of Alexis and Danny Welbeck. Arsenal have a run of games after October 5th against these sides, and it wouldn't be a surprise, especially as Theo Walcott returns, if Arsenal switch back. It would be a good decision: otherwise, Arsenal will suffer from the learning pains of a new system, and will drop points.

While the 4-3-3 makes sense when trying to rectify the trauma of last season's big games (and performances and results have been better against the better sides thus far), it makes far less sense against the lesser sides, especially as it limits the effectiveness of two of Arsenal's best players, Özil and Ramsey. Arsène Wenger has the necessary pieces to ensure that Arsenal aren't mired in the race for fourth place; now, he must use them correctly. Their deployment will define Arsenal's season.