According to the BBC, Arsenal and Manchester United have agreed on a deal for the striker.

According to the BBC's liveblog of deadline day, Arsenal and Manchester United have agreed a fee for the permanent transfer of striker Danny Welbeck. They report the fee is £16 million, which I'm entirely okay with for a pretty young striker who's had decent success when actually allowed to play through the middle.

Here's the thing from their blog, in case it crashes or something: 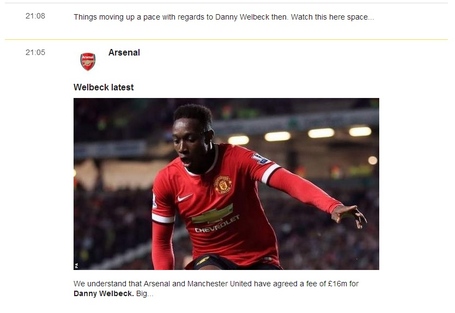 Sky is also reporting the deal closing in on completion, calling it "very close" and corroborating that it is a permanent deal, rather than a loan -- though now it looks like they're walking it back, because evidently they have no clue what's going on. We've also got the Telegraph on the case:

So we'll see if player and team are able to negotiate a deal in the next hour and a half or so, and complete this transfer. The Ornacle seems to think that should happen.

#AFC have agreement with #MUFC for permanent Welbeck signing. Fee in region of £16m, no issues expected with medical & terms #bbcdeadlineday

We'll have it as it happens.