Should Arsenal buy a Ramsey backup rather than defensive midfielder?

The popular opinion is that Arsenal must sign a defensive midfielder. However, given how important he was last season, is a proper backup for Aaron Ramsey more important?

Share All sharing options for: Should Arsenal buy a Ramsey backup rather than defensive midfielder?

The majority of successful football teams are built on partnerships between strikers, strikers and their playmakers, midfielders and defenders. There are, of course, subtle differences to those partnerships, and many include a third player or even fourth, but for now, let's work on the assumption that the most basic unit of success that we're looking at is just a partnership. The majority of Arsenal's success over the past two seasons has been based upon two partnerships: Per Mertesacker and Laurent Koscielny in the defence, and Aaron Ramsey and Mikel Arteta in the midfield. It was those four that turned things around in the spring of 2013, and continued the run of form that saw Arsenal spend the most days at the top of the table last season and finally break the 9-year long trophy drought.

The popular opinion this summer has been that Arsenal need an upgrade at the defensive midfield position, especially after hammerings away at Manchester City, Liverpool and Chelsea. The prevailing wisdom is that a better player at defensive midfield than Mikel Arteta would've seen such arrears reduced. While the scoreline may have been reduced, the structural deficiencies that caused Arsenal's shape to completely fall apart would not have been solved with a new defensive player. Indeed, the big defeats against Liverpool and Chelsea were a large part due to the absence of Ramsey, the man who made it all come together for Arsenal last season. Manchester City was an entirely different game; Arsenal were likely exhausted from the combination of a Sunday game against Everton, Wednesday game at Napoli and then an early Saturday kickoff against City.

Furthermore, Arsenal were well in the game until around the 70th minute. Ramsey was present for the City match; he was not present for the two matches against Liverpool and Chelsea, where Arsenal were obliterated within ten minutes. It's useful, though, to consider another big away game that Arsenal played last season against top-class opposition: the Champions League group stage match at Borussia Dortmund. Following the 2-1 loss at home, Arsenal simply had to get a result in Dortmund, and they did. They did so by sitting deep, keeping shape and trying to hit on the break, which they did, when Mesut Özil's lofted pass was headed on by Olivier Giroud for Aaron Ramsey to score. Ramsey nearly made it two shortly after, with only a great save denying him. With no Ramsey, though, and with Theo Walcott also absent, Arsène Wenger felt he had to change the way team played in order to provide support to Olivier Giroud. Thus, the fullbacks, Bacary Sagna and Nacho Monreal against Liverpool, and Sagna and Kieran Gibbs against Chelsea, were pushed forward, as was the midfielder alongside Mikel Arteta, Jack Wilshere against Liverpool and Alex Oxlade-Chamberlain against Chelsea.

Of the two, Oxlade-Chamberlain is perhaps the closest to replicating Aaron Ramsey's attacking game, but the defensive side of his game, at least in central midfield, leaves much to be desired. While Arteta's lack of pace certainly played some part in the maulings, the entire structure of the side was wrong. With Ramsey in the side, Arsenal were far more secure, and the numbers bear it out: Arsenal conceded 18 goals in the 21 league games Ramsey started, while they conceded 23 in the 17 games he didn't start--a difference of half a goal per game. Some of Mikel Arteta's best matches of the season, like both Dortmund Champions League matches and the home match against Liverpool, came alongside Ramsey. Even Mathieu Flamini, a target of criticism from this writer, was a capable Premier League player alongside Ramsey.

Effectively 4 v 3. I'm looking for the full backs, but

Arsenal didn't just miss Ramsey in the big games; they missed him against lesser opposition, as Arsenal struggled to get runners with the same effectiveness behind Olivier Giroud, and Arsenal's passing game became more predictable, especially as the link between Mikel Arteta and Mesut Özil, so often Ramsey with the intelligent way he takes up positions, was missing, forcing Arsenal's playmaker to drop deep, then get crowded out as he lacked forward runners to pick out. 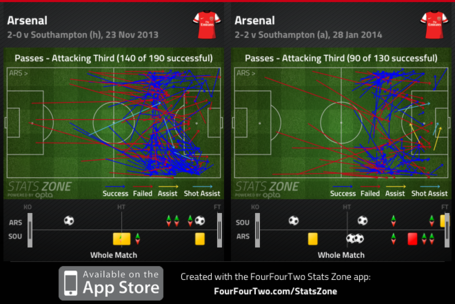 Of Arsenal's current midfielders, it's hard to find a player who could reliably (if not as good) replicate Ramsey's strengths, and could fill in for Arteta: good passing, good runs, a strong engine and intelligent movement both defensively and in attack. That is not Jack Wilshere's game, and recent performances show Wilshere shouldn't try to make it his game. As mentioned above, Alex Oxlade-Chamberlain doesn't offer enough in the defensive phase for a central midfielder. If he were to improve defensively, it isn't inconceivable that Oxlade-Chamberlain could provide some of what Arsenal miss without Ramsey, especially against weaker sides. Mathieu Flamini has the engine, the defensive attributes and makes forward runs, but he's not that good at the passing and creative side, and a midfield of Flamini and Arteta was seriously lacking most times last season. The best internal option is probably Abou Diaby--quiet at the back--but expecting him to be fit is like expecting to win the lottery on a monthly basis. 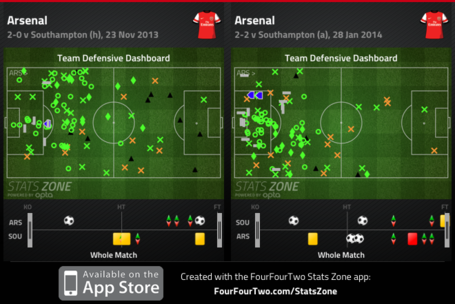 However, finding such a player may be easier than finding that long-heralded defensive midfielder, and may make more sense if Calum Chambers is to be a defensive midfielder in the long-term. Arsenal's attack should have more variety with the return of Theo Walcott and the addition of Alexis Sánchez, as well as the progression of Oxlade-Chamberlain and Özil, but Ramsey, and the role he performs, is still an integral part, not just because of the goals he scores but because of his passing and link up play in the midfield, and the options he offers Arsenal's midfielders. He also strengthens Arsenal's defending: without him, Arsenal either struggle to pass in the middle, or the second midfielder is not strong enough defensively, which will cause problems no matter who the defensive midfielder is. Ultimately, Arsenal didn't win the title last season because they missed Aaron Ramsey; despite strong additions this season, the same could very much happen again unless Arsenal properly back him up.