The transfer window is the best, you guys.

So if you were on Twitter this morning, but not slightly after "this morning," you might currently be under the impression that Arsenal are in talks to sign Radamel Falcao on loan from AS Monaco. Which, I suppose, could be true, but we certainly don't know anything about it.

The reason why this spread so fast is because it ended up in the BBC's transfers liveblog, which you can find here. Since it was scrubbed later (because, you know, it's not true), here's a screenshot Aidan took before we all got to the bottom of the case.

It came from David "The Ornacle" Ornstein, so of course we all believed it. The BBC's generally reliable on its own, so everyone started losing their minds. BUT WAIT.

Oh yes. This is all too real. Evidently there was a (now-suspended, with good reason) @bbcsport__david account, with two underscores rather than the actual account's one. And whoever does the liveblog for BBC didn't walk down the hall to Ornstein's office, or call him, or even look at the damn profile page before posting the "news" on the page.

Their social media guru bottled it, too. 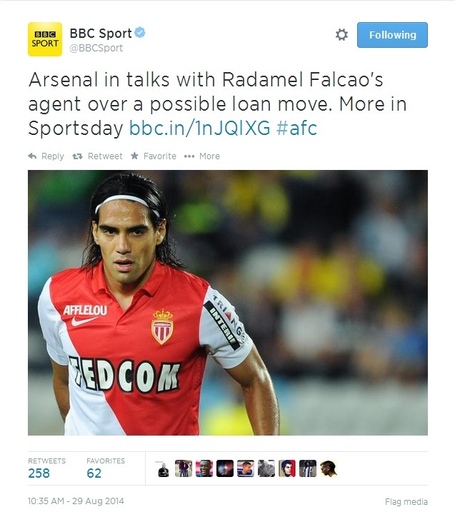 That's since been deleted, because IT'S TOTAL BULLSHIT THAT SOME ASSHAT MADE UP.

This, by the way, was totally lost to a bunch of members of Arsenal Twitter, who held onto the charade long after everyone else had figured out that it was not a thing. For at least one, it was due to some...let's say "misplaced" faith in the fourth estate. 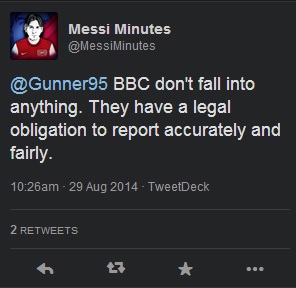 That's why this is the only image of Messi in an Arsenal shirt that I tolerate.

So just remember this for the next few days: believe nothing for at least a few minutes after it breaks. Because there are plenty of sociopaths with too much time on their hands out there. But if you take the right outlook (that is, that crap like this is absolutely hysterically funny), it can be pretty fun.