Which Former Arsenal Player Can Solve Their Midfield Crisis?

Share All sharing options for: Which Former Arsenal Player Can Solve Their Midfield Crisis?

Following the injury to Mikel Arteta, Arsenal are in desperate need of a defensive midfielder. However, some would argue that it has been Arsenal's biggest need this summer and one that they have failed to address. Indeed, it is a problem position since Patrick Vieira, with the Gunners unable to field a physically dominant midfielder since his departure (ignoring the fact that Vieira was actually a box to box player). There is however, a solution, and it comes from a player who used to be an Arsenal man before leaving for a new club.

Since this player left the club, he has played for a club whose manager emphasises organisation and positional discipline, improving this player's defensive skills and awareness. Indeed, while he was a more attacking player at Arsenal, his development since his departure has made him more of an all-rounder, with his performance against the biggest teams proving that he could be a capable defensive player for Arsenal. A glance at his WhoScored page backs this up: 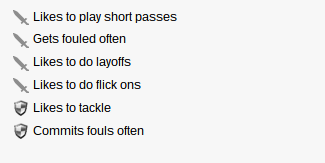 Furthermore, this player has the strength and physique to be a physical presence in the middle of the park, and with Premier League experience, he'd take little time to adapt. He also can chip in with goals, either from set pieces or if Aaron Ramsey is ever absent.

I am talking, of course, about Marouane Chamakh. In Crystal Palace's recent 2-1 loss against Arsenal, Chamakh showed that he has all of the necessary attributes to play the role. He tracked midfield runners well, he covered space well and covered when other midfielders and attackers went forward. Having played at Crystal Palace, he's had one of the best defensive managers in football in Tony Pulis teaching him, and his education was on full display. His defensive numbers, an important part when considering the possibility of any player, were excellent, with 5 tackles. His short passing, especially backwards and square, was strong. While his forward passing wasn't great, it's not like Arteta passes forward anyway. 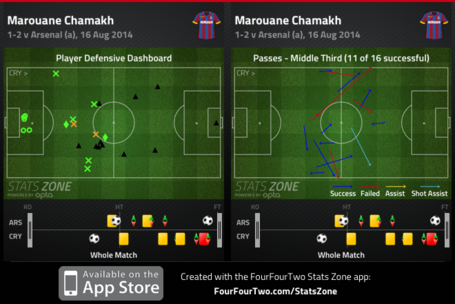 Furthermore, Chamakh showed an ability to foul without getting called for the yellow card, committing 11 fouls and only getting carded the once. It's an important mental skill, especially as the player in that role has to stop so many counter attacks. Plus, Chamakh's added height would benefit the team on set pieces, which is a clear weakness, as we can see from the concession of two goals in four games from set pieces this season. He'd also give the team more height in the middle of the park, which it needs because Wenger's side is the shortest in the Premier League. Adding Chamakh would alleviate some of the loss from Bacary Sagna; for example, Wojciech Szczesny would have an added target for goal kicks.

Chamakh's experience, positional versatility (he can play attacking midfield roles, as he has for Crystal Palace, as a #10 and can of course play upfront), goalscoring potential from midfield, height and defensive prowess makes him a strong contender to solve Arsenal's midfield crisis and help Arsenal on their title tilt for the EPL trophy. The only surprising thing is not that he's a candidate: it's that Arsene Wenger hasn't moved for him yet.