The season reviews get back underway with Arsenal's German centre back.

Share All sharing options for: Per Mertesacker: Season Review

To come away from a season which included 6-3, 5-1 and 6-0 losses to title rivals, yet still have very little aside from praise for both the main centre backs feels quite odd. But to hold either Laurent Koscielny or Per Mertesacker accountable for either would be misguided in the extreme, while between them, the pair continued growing fantastically together, as both individuals and as a partnership.

Mertesacker has evolved this season from just the defence's reference point to the authority figure for the whole side. This Arsenal side are a more inherently defensive one than any of its predecessors under Arsène Wenger: they are comfortable sitting deep, perhaps even better off the ball that on it. They owe this to Mertesacker more than anyone else.

He was the mainstay in the team that kept the joint most clean sheets in the league. In fact, I believe I'm correct in saying that with the exception of Norwich on the final day of the season, he was present for all of them. He is too important to get rests, too. Per alone played more games than the whole of Liverpool this season. Mertesacker's greatest ability is how he improves those around him. In very simplistic terms, this Arsenal are good because they can defend really well, and Mertesacker is the main reason for that.

Up until February it had all been just about ideal for Mertesacker and Arsenal. The Manchester City away game was more a case of individual errors from other players and the team had one of, if not the best defensive record in the league. The losses at Liverpool and Chelsea mostly killed the title dream between them, and shortly afterwards, on account of an uncharacteristically rash challenge from the German in the FA Cup semi final, many an Arsenal could be forgiven for writing out a hastily scribbled note and entering an empty room with the proverbial whiskey bottle and revolver. His first major error of the season looked as though it would be the most damaging of all. His equaliser was my personal moment of the season; having been so important in keeping them from The Pit of Despair all year, he was the one to drag them out when they needed it most.

Season in a picture: 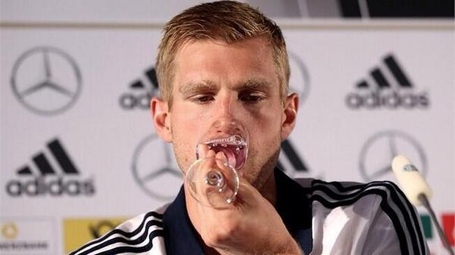