Alexis Sánchez will be central to Arsenal's plans

Arsenal's newest signing will be crucial to the way Arsenal play next season.

Share All sharing options for: Alexis Sánchez will be central to Arsenal's plans

In his review of Arsenal's season, Arsène Wenger noted his side's relative lack of goals, highlighting that as the area where Arsenal needed to improve: "A team like City scored 100 goals...we have scored 66 and that's certainly where we have room for improvement". In that regard, Arsenal's title-challenge was irrecoverably damaged once Aaron Ramsey was out for 3 months rather than 3 weeks, and Theo Walcott ruptured his ACL with Serge Gnabry, Lukas Podolski and Alex Oxlade-Chamberlain failing to replace the off-the-ball runs and finishing that Walcott brings. That led to more pressure on Olivier Giroud, especially as Walcott was no longer a viable option to play through the middle, something that had become more realistic with his performance as the centre forward against Tottenham in the FA Cup.

In an effort to add goals to the side, Arsenal spent January deciding whether or not they wanted to buy Julian Draxler, another wide-forward who could eventually play through the middle. Arsenal eventually decided against signing Draxler, but given the paucity of available top-class strikers, Arsenal decided to bolster their attack by signing a wide-forward, Alexis Sánchez. To an extent, this might make more sense, given the strengths of Arsenal's attacking players. Olivier Giroud has not been as bad as portrayed, providing a good starting point for Arsenal's attack to play off. What Giroud and what Arsenal's attack need are more players who make runs behind the defence, and can give Mesut Özil the chance to thread through balls to someone who will actually run onto them, as he did for a few glorious minutes for Theo Walcott.

Alexis Sánchez is that player and more. After excelling for Udinese, the 25-year old moved to Barcelona in 2011. The first two seasons, while not failures, were difficult and disappointing, with Alexis not helped by injuries in his first season. Denied the freedom that he had at Udinese and tasked with stricter positioning, Alexis, as he put it, had to "relearn how to play football". Those remedial lessons, though, came to the fore this past season, as he scored 21 times for Barcelona, second to just Lionel Messi, as well as finishing 4th in scoring in La Liga.

Alexis, though, didn't forget the things he had learned before joining Barcelona, and last season was perhaps a case of both adjusting to each other: Barcelona learning, for example, that he was more than just a runner and finisher to supplement Barcelona's attack, but also a genuine creator. That sense of positional freedom still existed for Chile, where Alexis is very much the main man. Yet he is sharper now, with better off the ball movement and is a far more clinical finisher than when he first joined Barcelona. These attributes all combine to form a player that will solve several of Arsenal's needs as they search to score more goals and become more dynamic and less predictable.

Wenger has said that Sanchez has "all the attributes of the modern striker", and it is likely that Sanchez spends some time as Arsenal's #9 as well as in his more usual position on the flanks. While on the flanks, Alexis has shown the ability to spin past defenders, coming short before bursting past, in an effort to get behind defenders. Furthermore, at Arsenal, Alexis would have the freedom to take people on, something that he did less of at club level after moving from Udinese. Some felt that Barcelona restricted him by limiting his ability to take people on, with an emphasis of ball retention; Wenger, on the other hand, wants players to express themselves, and is perfectly fine with players taking risks in the attacking third. 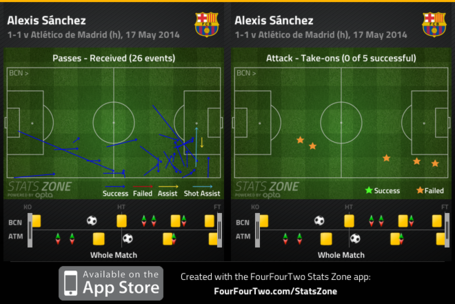 Playing in a freer role for Chile has enabled Sanchez to take more risks, and it is this iteration of Alexis that impressed so much at the World Cup. For Chile, Sanchez plays as part of a front two, but is allowed to roam the pitch to not only score but also to create, reminiscent of the role he had at Udinese behind Antonio Di Natale. The concern that has been raised about Sanchez as a lone 9 is that to be at his best, Sanchez needs space and movement ahead of him; otherwise, he is somewhat limited. Yet that might not be such an issue at Arsenal. The way Arsenal are constructed, Theo Walcott, nominally on the right flank, often makes diagonal runs towards the middle, often playing higher up than Olivier Giroud. In that way, he'd create space for Sanchez in the same way Eduardo Vargas does for Chile or Di Natale did for Udinese. This would also be the case if Sanchez were to play on the right and Walcott through the middle. 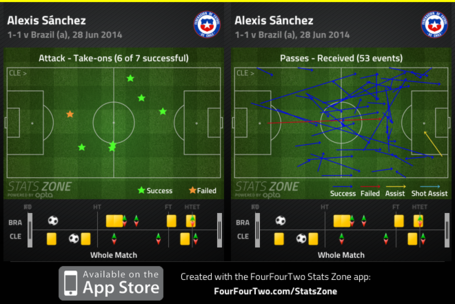 In this sense, Alexis is much more than just a wide forward; he is a combination of a poacher and a creator, a unique blend of power, pace and subtle technical ability. Whether Sanchez plays on the right, through the middle or on the left, he will add another target for Mesut Özil with his off the ball runs, and he will become another creator for the likes of Walcott, Giroud and Aaron Ramsey with his passing, runs and movement. After signing Mesut Özil last season, Arsenal needed to bring in a player that would be perfect for Özil's style of play; in Alexis Sánchez, they have found a forward who has the ability to be the blend of creativity, technical quality and poaching that Özil and Arsenal needed.