Joel Campbell will return to Arsenal

After three seasons, Joel Campbell will finally get a chance for Arsenal

Share All sharing options for: Joel Campbell will return to Arsenal

Striker Joel Campbell, who has spent the past three seasons out on loan after signing for Arsenal in 2011, will return to Arsenal this summer and participate in, at the very least, pre-season. Arsène Wenger confirmed Campbell's return, saying "he will definitely come back to us. He is maturing well."

Campbell spent last season on loan with Greek champions Olympiakos, where he came to light after scoring a spectacular 30-yard goal against Manchester United in the Champions League. This followed spells at Lorient and Real Betis. He has also, of course, sparkled for Costa Rica, scoring the equalising goal against Uruguay and assisting the third. He was quieter against Italy, but should've won a penalty, and also played a role in the opening goal with an excellent cross-field pass.

Playing up front but drifting to the right, Campbell has impressed with his movement and powerful running and shooting from long range. He's shown a desire to get behind defences, but perhaps most encouragingly, he's displayed very good vision and link-up play. And while he remains a work in progress, he has shown that he does have something to add to the Arsenal side, and will at least provide decent competition for Yaya Sanogo, if not Lukas Podolski, Theo Walcott and Olivier Giroud. 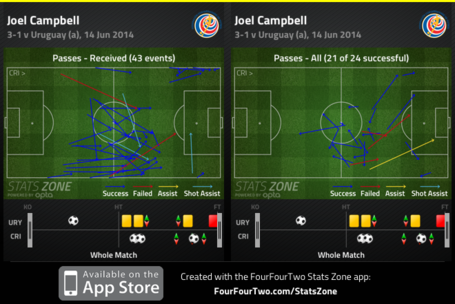