All season, it's been goals from midfielders that have propelled Arsenal forward. Today, it was Alex Oxlade-Chamberlain's turn.

Share All sharing options for: Alex Oxlade-Chamberlain steps up as Arsenal return top

First, it was Aaron Ramsey, then Jack Wilshere and then Santi Cazorla. Of their 47 goals in the Premier League, just under half, 23, have come from their midfielders. On Sunday, it was Alex Oxlade-Chamberlain's turn to provide the decisive touches, as Arsenal recorded their 10th 2-0 win at the Emirates in all competitions, and their 7th overall in the league.

The first half, though, was rather dull fare, which has become typical of this season's Arsenal. It is perhaps no bad thing: Arsenal dominated the match in the first half, and tried to break Palace down by playing one-twos in and around the box. The one-twos, though, needed to be perfect against Palace's two banks of four, and they often weren't. Arsenal, though, rarely committed numbers forward, as Bacary Sagna rarely pushed forward. His counterpart, Nacho Monreal, made more runs forward, one of which nearly resulted in a goal, as he ran onto Mesut Özil's fantastic pass, but his shot was saved by Julain Speroni. In the post match interview, Oxlade-Chamberlain admitted that he didn't make enough runs in the first half, but it enabled Arsenal to retain control, and they were barely threatened by Crystal Palace. 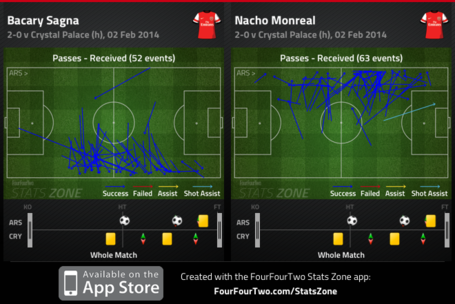 32 of Arsenal's 47 goals have come in the second half (16 of the 20 in the past 10 games), and that trend continued. From the offset, Arsenal were more purposeful and direct, epitomised by Oxlade-Chamberlain. He took advantage of Marouane Chamakh briefly falling asleep, and made the run past Chamakh and into vacant space. It was the type of runs that Arsenal's playmakers, Özil and Cazorla, had been looking for all match, and Cazorla wasted no time in picking Oxlade-Chamberlain out, who took two lovely touches to put Arsenal in front. 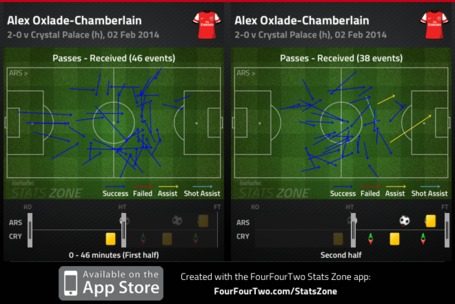 Arsene Wenger compared Oxlade-Chamberlain to Steven Gerrard, and more pertinently, Aaron Ramsey, and that comparison was made to look quite accurate in the second half, as Oxlade-Chamberlain continually made the extra run, much in the manner of Ramsey. His midfield bursts were excellent all game, and his second goal was a perfect example of that. After Rosicky picked up the ball in midfield, Oxlade-Chamberlain played a wonderful backheel to Olivier Giroud, and kept on, beyond the Frenchman, who returned the pass, setting Oxlade-Chamberlain off into space, and eventually, into the box, where he fired past Speroni.

That second goal was also exactly why Arsenal dropped off going 1-0 up. By dropping off after scoring, they entice the opposition into pushing forward, creating the space for Arsenal to counter. When Rosicky collected possession, Ward and Palace's midfield had pushed up, creating the space for Oxlade-Chamberlain to drive into. It might mean Arsenal concede more shots (though from a longer, less threatening distance), and don't dominate as much, but it means the chances Arsenal create are far more threatening.

The platform for Oxlade-Chamberlain's performance was provided by Mikel Arteta, who was absolutely outstanding as the sole holding midfielder. With the balance of a more attacking partner restored, Arteta set about controlling Arsenal's tempo, initiating attacks and giving Oxlade-Chamberlain the chance to push forward more. It was noticeable how vocal Arteta was, letting his midfield partner know when he should press, sit or attack, and part of Arsenal's dominance resulted from the quick passing that started from Arteta. The Spaniard, who completed 122 of 127 passes, is often wrongly accused of just passing side-to-side and not contributing to Arsenal's attack. Not only were 28 of his 31 passes in the final third, but he also was Mesut Özil's chief provider, passing 31 times to the German (Arteta's second most frequent target was Cazorla, with 19 passes). With 6 tackles, he added the steel that is apparently needed to secure Premier League titles. 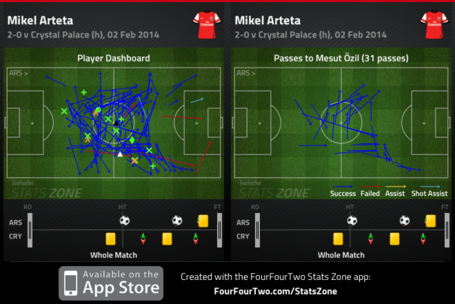