How do you replace Theo Walcott?

With Theo Walcott out for the season, Arsenal have to set about replacing him. That could be difficult.

Share All sharing options for: How do you replace Theo Walcott?

Theo Walcott is not only injured, but he is out for the season. Arsenal will be without the Premier League's fourth most productive player over the past three seasons for the rest of the campaign. That statistic reflects Walcott's growing importance to Arsenal: no one else at the club combines his pace and runs behind defenders; in effect, Walcott is Arsenal's second striker, and his absence will necessitate a rejig of Arsenal's shape and play. Arsenal, though, have already been without Theo Walcott and did well enough in his absence, though a large part of that was down to the off the ball runs of Aaron Ramsey. With five midfielders supporting the forward, you always need at least one player to add consistent off the ball runs. Ramsey, though, is also out at the moment, and had also started shooting less frequently, which is why Walcott's return was so vital.

Thus, until Aaron Ramsey returns, Arsenal are pretty much prevented from playing either Jack Wilshere or Tomas Rosicky in place of Walcott unless they want to put an enormous burden on Olivier Giroud. Even when Ramsey returns, playing five midfielders is more undesirable unless they start discovering a not-seen this season goalscoring touch: Tomas Rosicky has one goal, Santi Cazorla has two goals; Jack Wilshere and Mesut Özil have scored the most aside from Ramsey, with four and five goals respectively. It is Cazorla and Özil who perhaps have the most add, but for those two, the scoring of goals should be of secondary importance to the creation of goals: they cannot be relied upon the same way Walcott is.

With Serge Gnabry excelling against Tottenham on Saturday and Alex Oxlade-Chamberlain returning from injury, Walcott's replacement has been mooted as being one of those two. There are however, differences between Oxlade-Chamberlain, Gnabry and Walcott. Oxlade-Chamberlain has not yet been a regular scorer of goals, and there are reasons for that. Like Walcott, Oxlade-Chamberlain has a preference to play through the middle, but rather than play centre-forward, he'd like to play, and Arsene Wenger sees him eventually being a central midfielder. Oxlade-Chamberlain is capable of a brilliant off the ball run, but thus far, his performances have been better on the left than the right, and when he tends to play, he plays with quick bursts and acceleration away from players around the 18 yard box, and wide of goal; thus, his contribution will be more assists than goals.

Gnabry can also play centrally, but has excelled on the right when called upon for the first team this season. If Arsene Wenger has an ideal footballer, Serge Gnabry fits most, if not all, of the components: he is physically strong, quick, intelligent on the pitch, and very good technically. All of this allows for Gnabry to play well at several positions, and he has become a regular goalscorer at youth level. When Gnabry has played for the first team, he's done well holding the width and deciding which moments he should come inside. His goal against Swansea was very Walcottian, making a little run to get onto a through ball before finishing with a diagonal shot across the goalkeeper, yet, unlike Walcott, he gets more involved in all facets of play, as he did against Tottenham, where he was not only the top creator, but also, the top tackler. 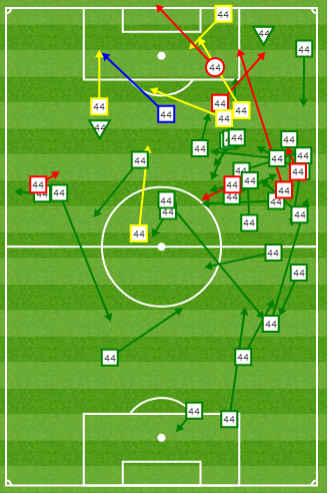 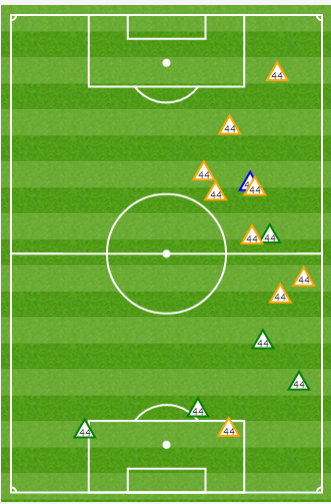 Gnabry in defence v Spurs: tackles in green, recoveries in yellow, interception in blue. Again, involved all across the pitch.

This would lead to a bit of a rejig, but perhaps not a bad one: if there's one criticism that can be leveled at Walcott, it's that he can sometimes be anonymous even when playing well, whereas Gnabry, if he were playing well, would be more involved. Gnabry, though, is just 18, and will have poor games. He cannot be solely relied upon to replace Walcott, and though he may be more involved, he is not as clinical as Walcott, not as frequent a goalscorer precisely because his sole focus isn't to get behind defences, unlike Walcott.

Lukas Podolski, on the other hand, does look to get behind defences. He does so, though, in a different way to Theo Walcott. While Podolski has good pace, he's not as quick as Walcott, and thus isn't going to create space for others. Instead, Podolski relies on space created by players ahead of him, and then often runs onto the ball in goalscoring positions--almost like Aaron Ramsey. Most of Podolski's goals for Arsenal have been scored in this way, like his most recent, against West Ham, where he followed Olivier Giroud and fired into the corner of the net. Podolski already has a good attacking relationship with Kieran Gibbs, and Santi Cazorla could easily play on the right, where he made his name for both Villarreal and Spain. Mesut Özil drifts to the right side, which would make interplay between Özil and Cazorla easier, and Özil also has a good relationship with Podolski, his international teammate. It's not the most ideal situation, but with the likely inconsistency of Gnabry and Oxlade-Chamberlain, and the obvious qualities of Podolski, it is the German who is best suited to be this season's variation of 2002 Freddie Ljungberg.