Nicklas Bendtner proved the hero, and showed he could have a vital role in the run-in, and Mikel Arteta and Mathieu Flamini shouldn't play together in this sort of match.

Share All sharing options for: Bendtner the hero as Arsenal remain top

It took his absence for everyone to realise how important Olivier Giroud is. Without Giroud, Arsenal played Lukas Podolski at centre-forward and looked as threatening as a baby's fist. As Arsenal Column wrote last week, Giroud makes Arsenal play, not least because the collective movement of this variation of Wenger's Arsenal is not yet as in sync as previous teams have been, which isn't much of a surprise: Arsenal's first choice attacking five have played together once. When the team does become more in sync together, playing someone like Lukas Podolski, who likes to drop deep and then arrive in the box, at centre forward, may work, especially with Mesut Özil back in the side and Aaron Ramsey available to make runs into the box. There was some of that from Theo Walcott, who early on took advantage of space left by Podolski. Cardiff wised up, though, and with only Walcott willing to make runs behind, Arsenal missed a focal point; someone to make them play. 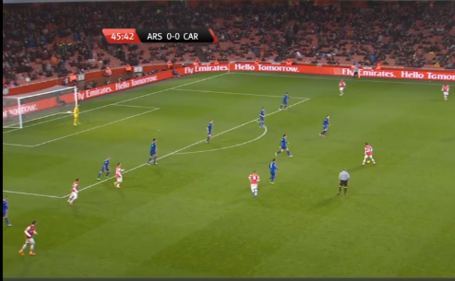 This moment just after the beginning of the second half showed Arsenal's problem: Podolski plays a nice little pass to Cazorla, and there's space between the centre backs with Caulker and Turner unsure what to do. No one, though, makes the run into space, because Arsenal's attacking players haven't been used to playing that type of game for nearly 4 years. The result from the attack is nothing. Clearly, Arsenal needed a reference point: someone who could hold the ball up and someone who could create space by playing one-twos. In the absence of Giroud, that man was Nicklas Bendtner. Within moments of Bendtner's arrival, Nacho Monreal had flung in a cross, knowing there was someone in the box to aim for. Because of that, Cardiff had to defend differently, and deeper, creating space for Santi Cazorla, Jack Wilshere and Tomas Rosicky, with the latter two unlucky not to score. 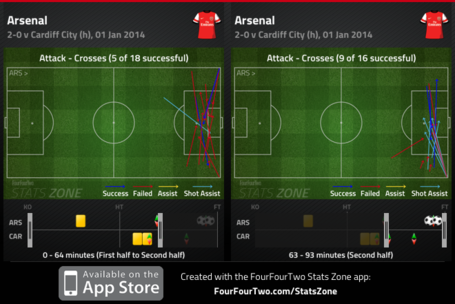 Unusually for a Wenger side, Arsenal's attack is constructed not only around the mercurial talent of Mesut Özil and Santi Cazorla, but around the power, strength and touch of Olivier Giroud. Thus, when Giroud is not available, the best replacement for that is Nicklas Bendtner who showed today that he is effective at holding the ball up, and acting as a reference point. This perhaps explains Arsenal's interest in Demba Ba towards the end of August and Diego Costa now; both are physical strikers who hold the ball up extremely well. What Arsenal need this window is not someone different, but more of the same: it is, after all, the style that has seen them be the best side in the Premier League in 2013, and top on the first day of 2014. When Arsenal, as a team, are perhaps ready for variation, there are players at the club, such as Podolski and Walcott, who offer something different and could make the team more unpredictable, but until then, why fix what isn't broken?

One thing that can be fixed, though, is the Mathieu Flamini and Mikel Arteta midfield partnership. In fact, perhaps fixed isn't the right word for it: it should really be done away with altogether. Aside from Arsenal's home Champions League fixture with Napoli, the partnership has failed spectacularly. While there might be some merit to playing the pair in a tough fixture away from home, or to seal a match, the two should not play together in a home match against Cardiff City. The reason for this is not only the defensive nature of the pair, but the individual attributes. Flamini attempts to replicate Ramsey, but his passing is far less inventive and quick, and his presence in the final third is a detriment. Arteta, at the very least, offers some inventiveness with his passing (as he did in the latter stages today), but if the partnership is to work, Arsenal have to play on the counter attack with Theo Walcott or Lukas Podolski in the side with Mesut Özil. That is not going to happen at home against Cardiff City. 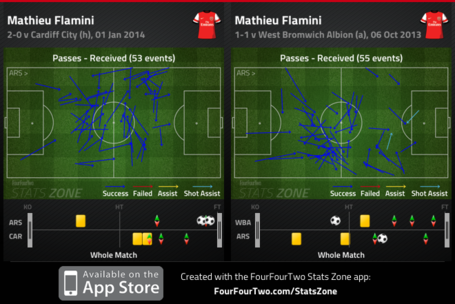 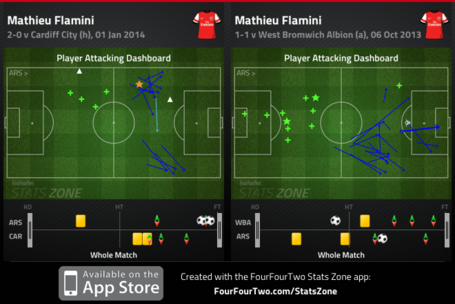