Is Wilshere as a winger the way forward?

The arrival of Mesut Özil brings obvious quality, and Jack Wilshere was deployed in a wide position, which could help his development and Arsenal's play.

Share All sharing options for: Is Wilshere as a winger the way forward?

"But what will happen to Jack Wilshere?" This was the question posed by busybodies trying to find another reason to decry Arsenal's signing of Mesut Özil; amusingly, said busybodies probably criticised Wilshere for his lacklustre performance for England during the week. And then they posed the question again, when Arsenal presented Mesut Özil for the first time on Friday. Arsene Wenger had the answer, saying that Wilshere prefers to play deeper, which he does. With Özil just 24, and signed up for 5 years, Wilshere's shirt number is merely symbolic, but shows Wenger's trust that he will be an important player for Arsenal.

At times last season, and perhaps for England too, Wilshere suffered because he felt too much of the creative responsibility, especially as Arsenal were struggling to create chances and score goals. With Özil now in the side, and when Cazorla comes back from injury, Wilshere can feel less pressure to always make the defining pass, and instead, focus on what he's good at: facilitating play, creating space and moving the ball quickly. The rest, undoubtedly, will come.

With Cazorla out, Arsene Wenger responded in an interesting way. Perhaps knowing Wilshere's shortcomings at #10, he put the Englishman on the left, to play much in the way Cazorla does: to come inside, and make a fourth midfielder, to help dominate possession, and to swap with Arsenal's #10. Luckily, Arsenal's new #10 loves to drift wide, and thus the balance is natural, especially as Kieran Gibbs is both excellent at coming forward and providing width, and also has excellent stamina. Thus, it is not exactly shunting Wilshere out wide, but rather, finding a way to use his best attributes in a position that gives Wilshere a degree of freedom. In this position, Wilshere had his best game in some time.

Wilshere's positioning was interesting. When he's played at #10 he's generally been ineffective because he's lacked the space to go on one of his dynamic runs, and because he prefers to receive the ball with the game in front of him. When he dropped deeper, Arsenal generally lacked the players to take the space he vacated, until the Sunderland away match last season, where Aaron Ramsey was superb. Wilshere got injured during that match, though, and was in and out of the side for the rest of the season, so we were unable to see how that rotation progressed. 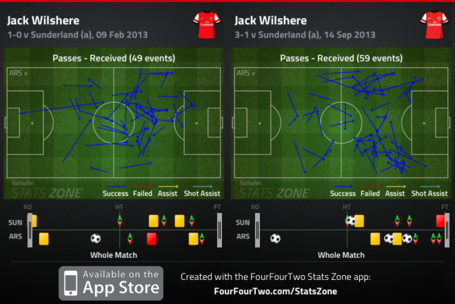 Playing on the left, Wilshere was able to come deeper and receive the ball with play in front of him. He picked the ball up in similar positions as he did at Sunderland last season, which was fine, as the space he vacated was exploited by Mesut Özil, Kieran Gibbs, and also by Aaron Ramsey. Wilshere was also able to play deeper because Theo Walcott stretched play on the right side. As a result, Wilshere was able to influence the game more in an attacking sense than he has before this season. In a deeper role against Aston Villa and against Spurs, Wilshere's attacking influence was limited as he didn't have as much freedom without a set holding midfielder, as Arsenal had yesterday in Mathieu Flamini. 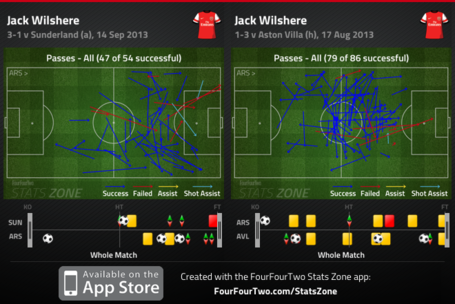 Meanwhile, Mesut Özil had a sparkling debut yesterday. He created three excellent chances, including his assist for Olivier Giroud, and completed 71 out of 79 passes, always creating space for attacks to develop. The assist for Giroud, though, is what he is all about: He was already drifting to the left when Kieran Gibbs played a long ball forward, and collected the pass with a sparkling first touch, and then knew where Olivier Giroud was running to. It was a goal of beautiful simplicity, and was reminiscent of the devastating counter attacks of the Invincible era.

But Özil also showed he could create when Arsenal were in possession too: one chance for Theo Walcott was made, and he was heavily involved in Arsenal's third goal. We've talked about how Aaron Ramsey can profit from Özil's arrival, and it was shown here. The goal featured several passes in the buildup, and, with Özil and Giroud dropping out of their assumed positions, the space was there for Ramsey to run, unmarked, onto Giroud's pass and score. Such goals are what Arsenal are all about when struggling to break teams down in possession: a run from a midfielder, and a pass into open space. With Özil's arrival, such goals should only become more frequent.