Arsenal Already Have Their Fellaini

Arsenal have been linked with a move for Marouane Fellaini this summer; but should they make it if they already have a player to do all that he does?

Share All sharing options for: Arsenal Already Have Their Fellaini

One of the protracted transfer sagas this summer has been the on-again off-again transfer of Marouane Fellaini to Arsenal. One moment, the man with the big hair is on his way to the Emirates after Arsene Wenger activated his release clause. The next, Wenger is a cheapo who can't bear the thought of giving away 22 million pound sterling for Fellaini, and THEN pay him about a hundred grand a week on top of it. In fairness, I see where Wenger is coming from. After all, let's consider Fellaini's qualities, as ably said here by this "anonymous scout" (probably Stewart Robson):

"Fellaini's better on the ball than he's given credit for, he's obviously strong in the air because of his height, his a physical player, great tackler, runs games, can put the foot in and he'll protect Jack Wilshere. Plus, he's Premiership proven. Furthermore, he can play CB, DM, CM, CAM, CF, well, you get the point. I'll stop there."

It's Olivier Giroud. How, you must ask. It's simple: Like Fellaini, Giroud can play centre back, defensive midfield, centre midfield, attacking midfield and centre forward (the scout never said Fellaini can play it well). Don't believe me? Well, let's review the facts.

Now, Olivier Giroud may have had a 64% passing range, but let's be fair: a lot of those bad passes were headed or chested flicks, sometimes with limited support from Arsenal's other attacking players. His longer passing, and his passing with his feet, is far superior, perhaps as good as Fellaini's, if not better (remember his through ball for Theo Walcott against West Ham in October?). For more graphical proof, let's look at some chalkboards! 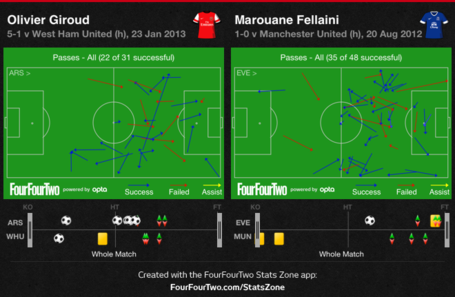 Furthermore, like Fellaini, Giroud is tall. Like, really tall. Fellaini is two centremeters taller, but does that really make a difference when we're talking millions of pounds here? Well, guess what: It shouldn't. Giroud had a crucial role in defending set pieces, clearing lots of crosses into the box. It's one the reasons why he could play centre back. Giroud is also a physical player, because, well, he's big. There's no way he can't be physical; his body type just makes him be a physical player. It doesn't hurt that he's strong; he can run games just like Fellaini because he can shove people out of the way and be stronger and protect the ball.

Now, unlike Fellaini, Giroud hasn't yet shown a propensity to throw elbows around, or headbutt opposing players. However, Giroud can still put a foot in, as he showed at Craven Cottage. Now, Giroud was sent off for his challenge, but it proved that Giroud can be physical and dirty when the situation requires. It was the type of tackle Fellaini would be proud of, and frankly, shows the type of spite and rashness that was prevalent in the very best of Wenger's teams. If Giroud played in defensive midfield, like Fellaini, he'd be making those types of tackles more often; he might even accure as many yellow cards as Fellaini, undoubtedly a positive thing.

In addition to that, Giroud has made the transition from Ligue 1 to England, meaning he gets the vaunted Premiership experience, with many observers having watched as much as Giroud as they have of Fellaini over the years. Furthermore, Giroud adds goals from midfield: While his finishing record may have been a bit poor for a striker, it's a very good record for a deep midfielder, and with his height, Giroud definitely offers a plan B.

Finally, Giroud can easily protect Jack Wilshere. With his 6'4 frame, sculpted body and rugged handsomeness to go along with the spiteful tackles he's shown to be able to make, it'd take a brave or stupid man to go after Wilshere with Giroud protecting him.

Really, with Olivier Giroud available, there seems to be no reason to go after Marouane Fellaini. Giroud ticks all the boxes that Fellaini ticks: he's tall, physical, can protect Wilshere, put his foot in, can pass the ball a bit, has shown the attributes he can play multiple positions, is strong, has a good goal-scoring record for a midfielder, plus, has Premiership experience. Additionally, Giroud is already dribbled by fewer times per match than Fellaini (.3 times per match, .4 for Fellaini), a number that would be guaranteed to improve at midfield.

With Arsenal set to sign strikers, he won't be needed at centre forward, but can play there in a pinch. Alongside Mikel Arteta or Aaron Ramsey, he could really give Arsenal a physical presence in the middle of the park. Make it happen, Venga!