As Nacer Barazite can attest, pre-season is usually the time for unheralded or unknown prospects to shine. Yet, it's rare to see such young prospects taken on oversea tours, which is why many were surprised to see Gedion Zelalem named among the 24-man squad Arsene Wenger was taking to Asia. Perhaps, though, people shouldn't have been surprised. Having formally signed for Arsenal in January, the 16-year old has trained with the first team, and, thus far, all his appearances for Arsenal's youth teams have come not at U-18 level, but at the harder U-21 level. Zelalem, though, has held his own at that level, and while he hasn't shown as he has on tour, he's shown why he's rated so highly by Arsenal's staff.

And although the quality of opposition isn't very high, Zelalem has shown why Arsenal initially invited Zelalem for a trial, and then moved to sign him. Zelalem's travel team coach, Matt Pilkington, put Zelalem into contact with Arsenal's North American scout and former player, Danny Karbassiyoon, who was impressed with what Pilkington called Zelalem's "natural talent: He has balance, vision, ideas."

It's those qualities that make Zelalem stand out among his peers. Many previous prospects that have caught the eye at a young age not only had discernible football talent, but also physically stood out. Jay Emmanuel-Thomas, for example, stood out at reserve and youth level because he was an excellent dribbler, but this was also helped by the fact that he was bigger and stronger than many others at the level, a trait that was cancelled out at Premier League level.

Zelalem, though, isn't the most physical player; in fact, he's quite thin, and probably does need to fill out physically. Yet, despite being thin, it hasn't exactly hampered him: while he hasn't dominated U-21 games like he has on the Asia Tour, he hasn't been pushed out of games because of the natural talent he has. He has an excellent first touch and ball control, and very good awareness of what is around him; traits that allow him to escape the attention of a close marker while maintaining possession. That can be seen in the amount of times he makes a little turn to make space, which is very reminiscent of Aaron Ramsey.

It's Zelalem's vision, though, which is most impressive. During the first two pre-season matches, Zelalem has already played multiple through balls that were both difficult to see and well-executed. 16-year olds playing for the first-team, even in a pre-season game, don't often do that; even if they see the pass, they'll usually choose to play the safer option. Yet, Zelalem has not done that; while he has played safe passes, and has used the ball intelligently to open up space, all excellent things to do, he's also tried to play the killer ball.

The first one that opened eyes was against Indonesia; Zelalem played a fantastic outside of the foot pass for Thomas Eisfeld, who hit his shot well over the bar. 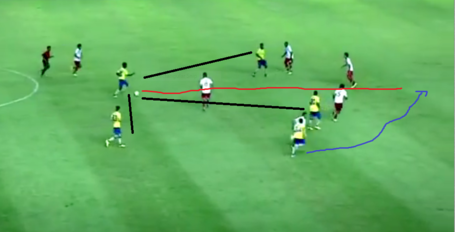 Here's the situation right before Zelalem plays the ball. He has four options, with two simple passes, one slightly more difficult pass, and one pass that takes a lot to both see and play. The easy passes are to Gnabry, on the left, and square to Kris Olsson; to play the ball to Chuba Akpom, he either has to curve the ball around the Indonesian midfielder or chip it; by no means excessively difficult, but not the easiest. Zelalem, though, chooses none of those options. Zelalem is thinking one or two steps ahead, and plays the ball between the two Indonesian centre backs, a pass that will meet the heretofore unseen and not thought of run of Thomas Eisfeld. Furthermore, it creates a direct goal-scoring chance, whereas many passes to Eisfeld would've perhaps forced him to go wider, because that'd be the easier pass to make.

Zelalem did it again against Vietnam. 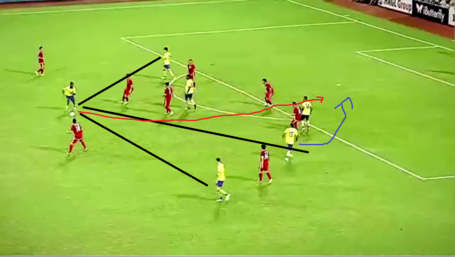 At this point, Zelalem had to turn away from pressure, which puts him in a good place to make a killer pass, but takes away one of the safer options in Ryo Miyaichi. He still has a square pass to Carl Jenkinson, but, he sees Alex Oxlade-Chamberlain calling for a pass, and indicating he'll make a run beyond the Vietnamese back line. Zelalem could do two things now: he could play a pass behind Oxlade-Chamberlain (as the black line shows), which would still put him behind the Vietnam defence, and would still put him in a good position, but would force him to perhaps take someone on or cross. The second option, the choice Zelalem takes, is the more difficult pass: between the left back and centre back, but in front of the goalkeeper. Zelalem, in a matter of milliseconds, decides to make this pass, and puts the perfect amount of weight for it, which allows Oxlade-Chamberlain to run on without breaking stride and square for Chuba Akpom to tap into an empty net.

This is why Zelalem is such an exciting prospect: he doesn't have a standout physical feature that puts him ahead of his peers; instead, his game is predicated on vision, technical quality and superb awareness and intelligence, traits that are hard to teach. This isn't to say that Zelalem is guaranteed to make it at Arsenal, and he does need to build up his strength, but as opposed to some previous Arsenal prospects, Zelalem's excellence at reserve and youth level football will be based on his skill, rather than his physicality.

He just did it again. He's scary good.