Oh, hey, Nicklas Bendtner's deal fell through due to his wage demands

Yesterday, we knew that Frankfurt bypassed Bendtner in favor of Vaclav Kadlec, but now we know that was done only after they saw what he wanted for compensation

Share All sharing options for: Oh, hey, Nicklas Bendtner's deal fell through due to his wage demands

Last name Ever, first name Greatest / Sir Nik is on the line, update me with the latest!

Frankfurt's a go; fees between the clubs are agreed and we just need your approval.

For real? Do work! That's why I pay you that enormous commission fee, Jay Hova!

So I took some time out from punching the stop signs in my neighborhood to come with my wage demands. I had to relent on a few things, but overall I think it's fair. I'll fax them over --

-- That won't be necessary; your dad emailed them over this morning. He said you were still sleeping off last night's sake and --

Like I said, I have a copy, but anyway. I have a few concerns, and I think we need to talk about them and whether or not I'm going to survive this summer with you.

Make it quick, I'm late for being sexy today.

Yes, right. Well let's look at the demands together. 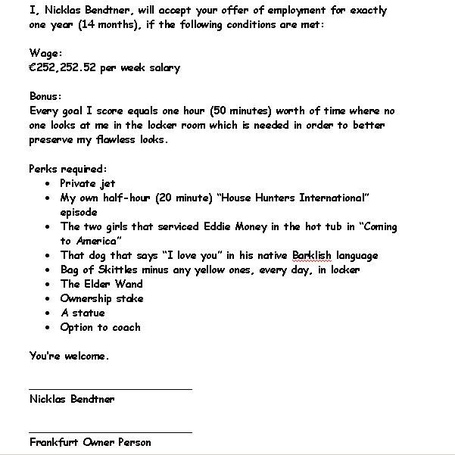 You can see that's pretty reasonable; I left off a few demands. Like, for instance, my desire to own a unicorn.

(eyes roll back in own head so hard he concusses himself)

You know what? I'll go and add a unicorn to the list. Screw it, why not? Because it's just as realistic as your demand to own a dog who speaks Barklish, or a fictitious magic wand.

You're above reproach, in your mind, to every set back in your stalled career. My brain slowly seeps out of my ears every time I'm cursed with calling you.

You are not a player who should demand any salary, let alone one that 99% of clubs can't afford. You're not a Champions League player, you're not a superstar.

You are Nicklas Bendtner: Failure of Expectations and only due to your self-delusion are you in this situation.

So...do you want me to send them the fax of those demands, or will you?

Have you figured out which one is the fax machine, and which one's the paper shredder?

Whatever. You send it. And you let me know what they say. Besides any chuckling, of course.