Nacho Monreal was brought in as injury/depth cover, and as such it's tough to grade his whole season, because with Arsenal he didn't actually have a whole season. But here we go!

TED:
Nacho Monreal arrived in circumstances where he hardly could have been more welcomed by Arsenal fans. He was replacing Andre Santos, who was the target of scorn, and Monreal couldn't help but succeed almost in light of that. Although it took some time for him to get up to speed in the Arsenal defense (one thinks of his rough times against Spurs, which Thomas Vermaelen played no small part in), but after that, he was generally solid, scoring a vital goal against Swansea. He's just a solid player, and although he only had 10 appearances for the Gunners so far, and it's a little hard to judge how he's going to be, I'm glad he's on board in some capacity.

THOMAS:
When we signed Nacho Monreal in January, I was thrilled. Not because he's a particularly great player - I don't watch a ton of Spanish soccer, but I knew he was a good defender - but because he has the greatest name ever. You may remember me spending most of the day just tweeting the word "NACHO" with different variations on the number of H's and O's.

Luckily he's also good. He made twelve appearances for Arsenal after coming into the team, and while he's not quite the offensive force that Kieran Gibbs is, he's very competent (while rarely flashy) in defense. He's an experienced player and with the injury history Gibbs has (Monreal was actually purchased when he was due to a Gibbs injury) that's important. As I noted in Gibbs' review, having an experienced and quality backup is important not just for when he's hurt, but for hopefully taking some of the playing burden off his shoulders (and hamstrings). The more confident Arsene Wenger is in the other option at left back, the more often Gibbs gets to rest, and the less likely he is to get hurt.

Nacho's best moment of the year for me was scoring the opener at Swansea, in the game immediately after winning at Bayern Munich. That win was really the start of Arsenal's league momentum - and the team didn't lose again all year. So I say again, NACHOOOOOOOOOOO 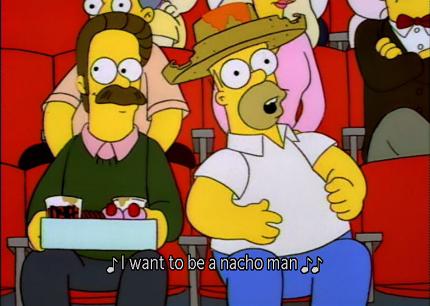 PAUL:
If there's one thing I love in this world, it's nachos. Well, I love my wife, but she's not a thing, she's a person, so I'm sticking by that original sentence. Nachos are delicious. So when I discovered that Arsenal were going to sign a guy named Nacho, at first I thought it was a joke - nobody's actually named Nacho, are they? But yes, someone is, and that someone is a very, very solid defender.

He was brought in as emergency cover when Kieran Gibbs was injured, because it turns out even Wenger doesn't trust Andre Santos; within just a few games he brought some stability to an Arsenal defense that often resembled a guy walking on swim fins down the sidewalk. He showed a few wobbles early, but once he settled in and learned a bit about Arsenal, he proved to be a very valuable pickup. He's not really a guy that's going to grab a lot of headlines or be in a lot of highlight reels, but he's one of those guys that I love that are all too rare these days - a defensive specialist.

He gets forward a bit, he scored once I think, but his job at Arsenal is to defend, and it's a job he does really well. If nothing else, he'll make Kieran Gibbs sweat a bit next season as he challenges for that left back slot; that will ultimately help not just Gibbs, not just Monreal, but Arsenal as a whole.

AIDAN:
Nacho Monreal came into a team that hadn't been the most defensively solid, and it showed a bit as he was at fault for one of Tottenham's goals in March. Aside from that, Monreal was pretty solid; he looked strong aerially, and dealt well with most of the wingers he faced, even if it took a yellow card for him to shut down Andros Townsend. It may be a lazy comparison, but Monreal seems to be the left sided version of Bacary Sagna: defensive solidity ahead of attacking ability, though his attacking contributions are underrated because the ability to be a good passer is sometimes underrated in fullbacks. Monreal has that, and makes good attacking runs, if not as frequently as Kieran Gibbs. He still contributed offensively, scoring the first goal in a 2-0 victory against Swansea that started the run to 4th, and contributing a couple of assists along the way.

I expect Monreal to battle Gibbs for the left back slot next season, with the expectation that Monreal starts away games and Gibbs home games. It's a platoon that could work well because Monreal is an intelligent defender who's a solid tackler; not that Gibbs isn't, but Monreal fits into a solid style a bit better.

TRAVIS:
As I reflect back on Nacho Monreal's short-season with Arsenal, I really can't think of anything bad he did. One could fault his error in letting Aaron Lennon past him, but the back line as a whole was very shaky and misfiring that god-awful day (although it's hard to stop anyone while on your ass from slipping). And for all Lennon lacks, besides the finest eyebrow style lines, he's far from short on pace.

Otherwise, I really can't seem to recall yelling his name in vain. He was here, in the background, he was better than Andre Santos and, overall, he defended well. I still prefer Kieran Gibbs if both are healthy, but depending on the situation and potential matchup, Monreal's defending would help ensure a tighter defense.