After a brief hiatus, we're back reviewing Arsenal's players and their 2012-13 season. Today? Jack Wilshere.

As much as we wanted to get one of these out every day, life gets in the way sometimes. But fear not, we're all lifeless again....oh wait no. Fear not, we've now got no lives? No, that's not it either. Anyway, we're back to having some time again, so let's talk about Jack Wilshere, shall we?

AIDAN:
In one part of his 2006 book The Italian Job, Gianluca Vialli (or his ghostwriter, Gabriele Marcotti) represents the abilities of a footballer in a quadrilateral on an X and Y axis, with the four elements being athleticism, technique, football intelligence, and what he calls "balls": the ability to bounce back from set backs and confidence in your own ability. If you were to apply this quadrilateral to Jack Wilshere, he'd score high on athleticism, technique, and balls; few can deny Wilshere's self-confidence and ability to come back from set backs. After all, Wilshere was out for 15 months, and returned, despite the fact that there were fears his career could've been over. His technical quality cannot be in question either; Wilshere is a wonderful dribbler, with an excellent ability to work in tight spaces, and has variety in his passing, able to pass long, short and play quick one-twos. His shooting and right foot isn't all there, but it will be. He displayed all of that in the 33 games he played in last season; there was the ball over the top for Nacho Monreal to square for Santi Cazorla, the dribble against West Brom and the throughballs in the deconstruction of West Ham.

Yet, there is one area where Wilshere struggled. It's in the football intelligence quadrant; not all of it, mind, as that includes instinct, something that Wilshere has in abundance. But tactical knowledge is important as well, and that is where Wilshere struggled at times. I've discussed his issues in the double pivot, but he also wasn't great as a number #10; he came too deep, at the wrong times at occasions, showing his preference to not play with his back to goal. If he is to be a #10, and if playing Theo Walcott or a similar poaching striker will work, Wilshere will need to work on his play with his back to goal, and when he drops deep. This is not surprising; the only way you can develop this is through playing, something which Wilshere hasn't done much of over the past two years. This happens to all attack-minded midfielders; they all have positional issues. We've seen enough from Wilshere to think that he can develop into the number 10 that he, Arsene Wenger and others believe he will be; now he just needs to put it all together.

PAUL:
Ah, Jack Wilshere. Bags of promise, England's Next Great Hope, not quite Beckham Mk. II but still his own Golden Generation. Then, in 2011, he hurt himself. Fast forward 15 months, to November 2012, and here's Jack again, starting against QPR, and showing flashes of the brilliance we were all told was coming. Between November and March, Jack did what Jack does - work his ass off, create space, get into dangerous positions and shoot - and everything seemed right with the world.

Then, starting in March, he slowed a bit. We all feared the worst, and while it wasn't the worst, it wasn't good - his ankle started bothering him again. He decided to gut it out until the end of the season, but he wasn't quite the same player - he lost a bit of pace, didn't move as well as he had, and generally just looked a bit off. He's getting his ankle cleaned up this summer (removing a steel plate, I think?) and with a proper summer's rest, untroubled by pointless international tournaments, Jack should be back to more or less his usual storming, aggressive, fast-moving, goal-creating-and-scoring self. I look forward to a full season of healthy Jack Wilshere.

TRAVIS:
If there's one player on the current squad whom I feel supremely confident in finding his game once again after a rough and challenging season, it's Jack Wilshere. He's still a fantastic talent, still young and still has a very, very bright future ahead wearing the captain's armband. Forgiving his play at times throughout the 2012/13 campaign, let's remember he wasn't afraid to do this at times last season: 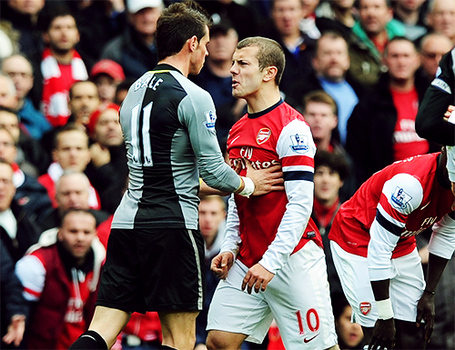 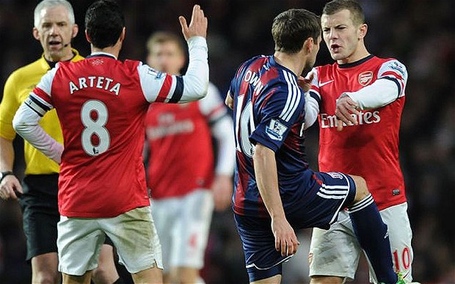 It's trite, these days, to say that a player we only view through the television and photographers' lenses holds a high level of respect and loyalty to his club. However, deep down inside, I truly believe that Jack Wilshere loves Arsenal as much as you and I do. That said, I think he'd be the first to tell you that he's trying to find his role on the pitch and, coupled with coming back from such a long and debilitating layoff, he wasn't entirely pleased with his overall performance. He still possess fantastic dribbling abilities in tight spaces and doesn't shy away from attacking the defense with the ball at his feet. However, it felt at times he was doing a tad too much in trying to force the issue, leaving the rest of his teammates left wanting. I don't think, though, this is a long-term issue and I fully trust his ability, and the coaching staff to develop him even more, to become the sort of attacking, creative midfielder we know he can be.

THOMAS:
Jack Wilshere has had a rough couple of years. He injured his leg at the start of the 2011-12 season, and while it was supposed to only be a minor thing, it metastasized into something that kept him out for over a year. This was bad. It stunted his development after a great year in which he featured heavily in the Arsenal side. It hurt the development of the Arsenal midfield. It lost us points.

Wilshere returned this year, and while he was certainly good - and he showed flashes of what he was in 2010-11, on occasion - he didn't match up to that full season, and it was clear that something was lost. He started to break down again at the end of the year, and I'm particularly glad now that he'll get a good rest this summer, because he needs one.

When I say "something was lost," I don't mean it in the permanent sense. I think Wilshere, once this injury is well and truly behind him, will get back on track and will still be the player that we all thought he would be after he stood toe-to-toe with Xavi and Iniesta for an evening. I think his talent is still there waiting to be tapped, and I have a little more faith in a young player's ability to make up for lost time after seeing the season Aaron Ramsey put together this year. I think Wilshere will be back, and better, next season. But this one was a bit of a lost year, by the standards he set at age 18. But if he stays healthy this summer, and recovers well from last season's physical strain, I wouldn't bet against a big 2013-14 from Jack Wilshere.

TED:
Jack Wilshere is on the cusp. He's in kind of a weird place, because we don't really know yet what his best position is. Right now, his main problems are that he doesn't know where to stand, when to stand, and when to move forward, so he's sort of weird in a double pivot. He's also not really up to being a true creator yet in the no. 10 role. One thing he doesn't lack is energy. His season this year more or less kind of reflects this: out of position at times, but also able to pop up at the right moment (as against Swansea) to put home a decisive effort.

He probably won't turn out to be a goalscorer, either, but he needs more games and he needs to develop his tactical awareness. Once he does that, it may become more clear where he will fit in Wenger's system. This year, though, he was mostly okay, but not yet great.