Tony Adams miffed by Arsenal board, seeks out trash paper to air grievances

What do you do if you feel snubbed by your old employer? If you're Tony Adams, you call up The Sun and make yourself out to be desperate, disillusioned and, unfortunately, sad

Share All sharing options for: Tony Adams miffed by Arsenal board, seeks out trash paper to air grievances

Let's first get this out of the way: Tony Adams is the club's best-ever defender and some can rightfully argue he might be the best player to ever wear the Arsenal shirt. He spent his entire professional career at Arsenal and was the greatest captain and steward for the club, on the pitch, in our long and storied history.

While they are opinions, I feel those above are not up for debate and, in my honest opinion, you'd be completely mad if you offered up another defender worthy of that mantle (yes, even you, Sol Campbell, can put your hand down). But ever since he left the club, there's been this odd dance, of sorts, between Adams and Arsenal that's unfortunate; generally-speaking, legends should be fully-ingrained in the fabric of the club after their retirement to carry on traditions, remind others of history and past successes and to be an overall ambassador going forward. This isn't the case, currently, with Tony Adams and Arsenal and, judging from these recent comments, doesn't appear to be one in the near and long-term future.

So it really comes as no shock to see Adams saying the things he did, to The Sun of all places, regarding the state of affairs at Arsenal, his disappointment at the Board for failing to reach out to him for advice and what he'd do differently if he was manager at the club.

Adams blasted: "It’s time that Arsenal won something again, even the FA Cup or League Cup. But I can’t see it, to be honest.

"They are still not good enough in certain areas of the team. And they are miles off the title." Adams, 46, revealed he offered to join the Arsenal board but never received a response.

And he was stunned when the club named 73-year-old Chips Keswick as chairman last week, saying the appointment lacked imagination.

The former Gunners captain added: "Chips is a great guy but not a very imaginative choice by the owner. And he is 73. "If they just wanted a figurehead, they should have gone for me. It would have been a better visionary decision than Chips."

Being "miles off" from a title is an improvement from being "a million miles away", so I suppose there's some improvement in his eyes. That said, I humbly disagree with everything Tony Adams says about the state of Arsenal and what he'd do to "fix things."

To start off with, in the video that's embedded in the piece above, he states that one of the reasons he'd be a great fit within the walls of Ashburton Grove is that he "...knows a few standards and the values of the club," then goes to extraordinary lengths to completely undermine the status of Arsene Wenger solely on his age in the very next breath. A manager who's received the backing of even the harshest critics of the club. Adams, apparently, has turned to a new vice these days and that's getting hammered off his wild imagination and perception; intentionally making the club's current foundation and status untenable is about as far off the grid regarding the values and standards of the club as one can be. He goes through the standard-issue talking points about why Arsenal are perpetually in crisis: an owner who's always absent, lack of trophies, an out-of-touch Board and a lack of signings.

If Tony Adams is to find a reason why no one from Arsenal has sought him out for anything at the club, it's probably best to start with the fact that Tony Adams doesn't have the best relations with Arsene Wenger, a man that both Stan Kroenke and Ivan Gazidis have repeatedly backed. Adams ludicrously once said that George Graham was a better coach than Wenger, and that "coaching isn't (Wenger's) strong point."

Further, while coaching Azerbaijanian side Gabala in 2011, he snubbed Arsenal's invite to celebrate the unveiling of his statue at the Emirates; he would leave the club just four weeks later. This appointment, in one of the most remote corners of the world, followed his 16 match stint at Portsmouth in the 2008/09 season where he was relieved of his duties after securing a meek ten points. To say his managerial career hasn't panned out would be an understatement, but Adams still clings to the fact that his foresight and vision would benefit a club that's gone eight seasons without a trophy.

Hindsight being the ultimate weapon, of course, but let's remember that he would have given Robin van Persie the money he demanded last summer because, in his thoughts, only van Persie would have secured Champions League qualification going forward. Which, again, hindsight, but also, if one were to look at the financials, profit excluding player sales dropped to -£31.3 in 2012; the club couldn't simply "give the £25 million to Robin" as Adams wished for: 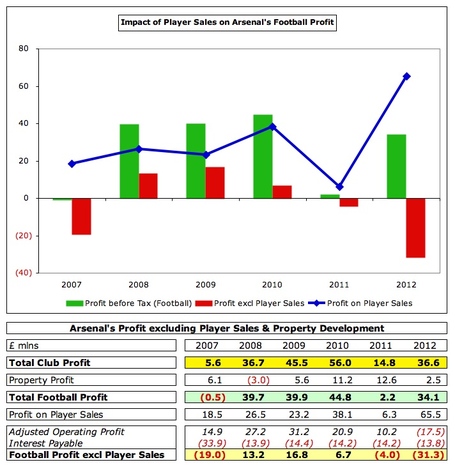 Adams is a footballing man first, but I think we can agree that the way the club handled the van Persie saga, with every factor accounted for, didn't turn out to be the apocalyptic situation he previously thought and voiced.

In short, I hate writing this up because after reading today's article and his quotes, I'm struggling like hell to remember the great things Adams brought to fans as a player. He clearly loves the club as much as any former player or passionate fan, so his heart and intent are in the right spot. But with each quote deriding Arsene Wenger - who, by the way, could manage circles around George Graham - while passively suggesting he could do a better job than the current manager and Chairman of the Board, he comes off as a jealous, bitter legend who's struggling to find his footing in the arduous and choppy retirement waters. Hopefully he finds some inner peace within himself, since it appears he can scratch both "manager" and "Board member" off his Potential Things To Do list.

So in order to make sure we all remember Adams for the player he was, as you're done reading this and potentially the linked articles above, please watch the video below to get an idea, or needed refresher, of his brilliance on the pitch.