Andre Santos happened to all of us. Let's relive it one more time. 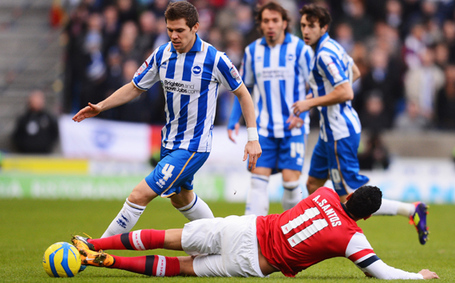 One night in Chust three years before now which ees present time, when all of dark set in and make city go dark due to outage of power I found comfort in Natasha, a lady I took in after I showered her with bread during zee annual National Beggars and Unsourced Nuclear Weapons on Trailers Day that go honk honk beep beep down street of wide.

After dinner she turn affectionate zhis night of particular and want to see zee Head of Metalloinvest, if you catch my drift hehe. I tell her fine let me wash hands since I don't share my Frank's Hot Sauce with others, and zhen we go up to room of king size and make like primates. I pick her hair, she pick my hair in back, I lick her face and zhen we start. It was of zee most lovely.

But zhen weird thing happen! Halfway through, she ask me if she can take zee Fruit of Zee Looms I wore before making deed happen home as trinket! No one ask for them halfway through, only after. Usually if lady don't ask I send them to Georgie Thompson in zee mail with a note that says don't stop me falling it's destiny calling a power I just can't deny it's never changing don't you hear me I'm saying I want you for zee rest of my life together forever and if you say no zhen there will be repercussions.

I look at Natasha, smile, and stick one of leg hole over her head and neck and say there you go now please don't look at me. After minute or ten, she leave and as I get up Sergey, my driver of car and autos come out of closet naked with camcorder and look me at me weird. He say in all of time of secret love making video capture, he never seen such thing! I agreed with him, then we go downstairs and play new game on Xbox called Hostile Takeover.

One thing we all must remember about professional athletes is that even the worst athlete on a professional team, particularly a team in the upper echelon of pro teams, is far, far better at his sport on his worst day than you or I are on our absolutely best day.

Andre Santos played for Arsenal this year. I found him amusing as a human. The furor over the Robin van Persie shirt swap was painfully stupid. May God have mercy on Andre Santos' next team.

Let me just state up front that I love Andre Santos. I think he's a fun dude, and that he seems really nice. If I were a player, I'd want to be his friend. 2011-12, he was a bit rough around the edges, but he scored hilarious goals to make up for it, and that's cool. 2012-13, he was basically a catastrophe. I'm sure he wasn't all bad, but most of what sticks out in my mind is poor. Like Thomas, I don't really care about the shirt-swapping with RvP--to me, that was RvP trying to take advantage of Santos' good nature, and I hate RvP more for that than anyone--but Santos' on-the-pitch play was not up to standards. He's a hilarious and good dude, but he didn't help on the pitch, which is a bummer.