Share All sharing options for: On Arsenal Celebrating 4th Place

As you may have seen, if you follow either me or Ted on Twitter, I was at the Pacers game last night as we beat the Knicks, winning the Eastern Conference Semifinal and advancing to face Miami in the Conference Final. It was a big game - probably the most important sporting event I've ever attended live. The stadium was full and crazy loud, and the game was close late and tense. If you know me at all, you know I was bricking it something fierce.

But honestly, I was at least as nervous for today - while that game was happening - as I was about the Pacers winning.

To be fair, a part of that was because for Indiana it was the sixth game of a seven-game series, so it wasn't quite a must-win (though it kind of was, really). But really it was because today was a massive, massive game for Arsenal. A win secured fourth place, and a berth in next year's Champions League. It might only be the playoff round, but it's Europe, and not the off-brand kind. It's important.

After the final whistle, I screamed. Much as I did after Laurent Koscielny scored the goal that ultimately secured Arsenal's umpteenth consecutive Champions League berth. The players celebrated on the pitch. They hugged and jumped around, and Bacary Sagna squirted people with his Lucozade bottle. It was all very fun to see, and a great reward for a team that had just gone through a hellish ordeal, having to get 29 of the final available 33 points to secure fourth place. It took hard work and a bit of luck, and some great defensive fortitude (yeah, Arsenal ended up with the second-best goals against in the league. Think about that for a minute). Most of the pundits, on television and newspapers and the Internet, didn't think they had it in them. They proved them all wrong, and Theo Walcott actually mentioned in his post-match interview that it was a bit of a motivator for the squad.

So they'd done it, and beaten Tottenham Hotspur to (real) Europe. They were pleased. And of course, this is where the hacks came back in.

Being American I was watching on ESPN2, and I don't know if Steve McManaman is still a thing in England, but he is here - or at least he was, until this year. I'd already had to suffer through two hours of him and the less-awful but still not great Ian Darke, and he got one last parting shot in before banished to the gap between dimensions, as the Premier League moves to NBC.

Look at them celebrating. I know they're in the Champions League, but they're acting like they've won the league. Blah blah blah I hate fun and I'm a big moron.

Okay, I paraphrased a bit, and made up the end. But the spirit is there, and it's a goddamn stupid spirit. And he wasn't the only one saying things like this - there were Spurs fans cracking jokes about being "content" with 4th (which is rich), there were journalists trying to be funny, there were all manner of idiots showing off. It was all very annoying.

There are a whole host of reasons why these players ought to be celebrating, and if you're going to try to withhold that, I am going to laugh at you. Not that I should really have to explain this, but here's why. 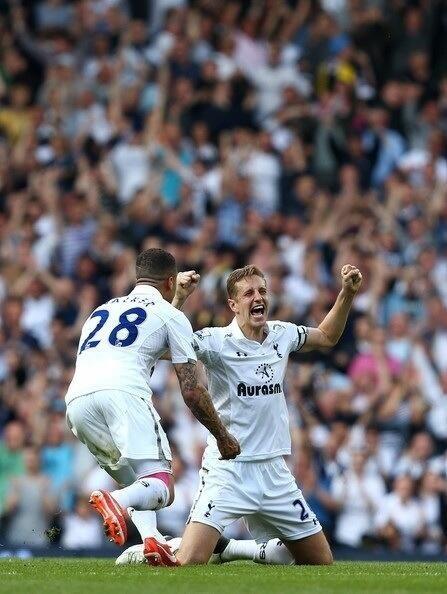 That's a man who thinks he's in the Champions League. You think it doesn't matter? Because it did to him.
This is why we celebrate, and we should. This is why the players celebrated, and they should. And this is why anyone who has anything to say about these celebrations is just off-target. Enjoy this win, and enjoy fourth place. It's been earned.