Share All sharing options for: Alex Song: Still a Malcontent

I normally don't wake up each morning and think "What's Alex Song up to these days?", mainly because I normally don't give a sh*t about second-rate players who force moves away thinking they're better and bigger than the club that groomed them. With this in mind, I assumed (maybe inaccurately, but still) that many of you were like me in this regard, which is why I'm here to check in and see where our disgruntled, former midfielder is up to at FC Barcelona.

Last I knew, he left for greener pastures seeking out bigger paydays and trophies, but was found rotting his career away on the bench, a player on the periphery facing the harsh realities of his situation looking in from the outside as his teammates celebrated goals on the pitch without him. So let's journey together and find out what Songo is doing these days, shall we? 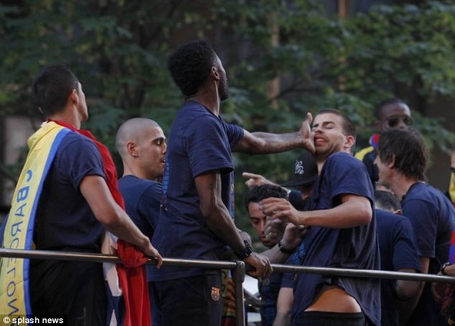 Yep, that's our former midfielder b-slapping fellow teammate Gerard Pique in the face on top of their bus as they traveled through the city celebrating their La Liga conquest this past Monday afternoon. Here's another photo of what appears to be a lively debate between the two about quantum physics or, more likely, a conversation about whether or not two plus two really does equal four: 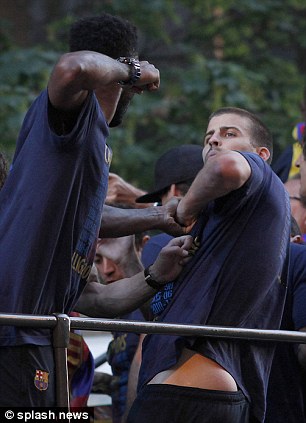 You can read about the story by clicking on either of the two links above; it appears the encounter wasn't an entirely sober one from all indications, but. This cannot be the sort of career arch Song and his agent Darren Dein had in mind when they caused enough ruckus last summer while touring Asia that led Arsene Wenger to sell yet another player to the Catalan club. Just like others before him (sans van Bronkhorst), his career is stalling, he overplayed his hand and he's stuck fighting teammates in front of thousands of adoring fans and, worst of all, the media and their cameras.

I would feel sorry for Song, since it must be highly frustrating to sit on the bench collecting splinters and rocking a track suit on match days like the boss he is, but no. Alex Song kicked up enough dirt and dust deliberately, knowing he can easily make any situation untenable and forcing a move away from a club that, from an outsider's view, treated and paid him quite well. He got his wish to move to the bright lights and glamorous play of the Spanish power, but what he didn't realize is that Tito Vilanova needed someone for depth and he got that in Song. Now Song is unhappy and Wenger ruled out a return for him after it was revealed he's not exactly loving life as a glorified water boy.

In short, what I'm trying to say is Alex Song sucks at life, can get bent in all sorts of positions and I wish him well as he traverses mid-table club-after-mid-table club throughout Europe, punching and kicking his way from one mediocre spot to the next. Arsenal does not miss this guy.