The Portland Timbers took on one of their most challenging opponents of the season today. How did they do?

It was a beautiful day for a soccer game. Today, the Portland Timbers welcomed the Green Machine to the intimidating confines of Jeld-Wen Field for a battle for Portland soccer supremacy.

Right from the start, the Timbers showed they meant business: they ran out a fairly untested-for-them 0-2-2 lineup of Jack Jewsbury, Darlington Nagbe, Will Johnson and Mikael Silvestre, with Silvestre and Jewsbury at the back, against the seven best Green Machiners, led by Atticus. Right from the off, the Green Machine took it straight to the Timbers, passing with purpose and not giving the Timbers much of a look at the ball. All this pressure paid off in the second minute, when a Green Machiner (I didn't really get their names as I was busy taking pictures and wasn't taking notes) slotted a perfect pass to his overlapping teammate and the ball found the back of the net like it knew it belonged there. 1-0 Green Machine, and the crowd went ballistic.

The Timbers Green Machine Army was in full voice, and upon seeing that first goal go in the cheers were deafening; the Machine took that support and roared into a 3-0 lead before the Timbers knew what hit them. The Timbers quickly pulled a goal back thanks to the work of Darlington Nagbe, who shortly thereafter provided a perfect setup pass to Will Johnson, who made it 3-2 and had the Machine on its heels a little bit.

But then the Machine rolled up their sleeves, got to work, and scored a couple more; the Timbers tried to defend, but they were outgunned. To counter the rush, the Timbers made a few strategic subs, including the intriguing move of bringing on a goalkeeper as an outfield player, and that provided a boost - two goals for the Timbers later, the half time whistle blew, and not a minute too soon for the beleaguered home side. The Timbers were down 6-4 and hanging on for dear life.

The Timbers started the second half with the Johnson/Nagbe/Silvestre/Jewsbury lineup back in the game, only to find that the Green Machine had emptied their bench - literally. Every Green Machiner was on the pitch for the second half, all 11? 12? I don't know, but it looked like about 30. They were pacy, they moved the ball around well, but at first they understandably struggled for some cohesion. They settled down a bit and got three more goals, giving up a couple in the process, and with about 10 min to go, it was 9-6 Machine. They started coasting a bit, and my wife saw a Machiner try to pants a Timber - the Machine were getting cocky, and rightfully so. They marched into one of the most hostile venues in MLS and showed the Timbers they weren't afraid of them.

This served to do nothing but fire up the Timbers; before anyone knew it, the Timbers roared back and tied the game at 9 with only moments to go. But then! In a move that you couldn't script in a million years if you tried, and that Hollywood should totally make into a movie, a Machine midfielder picked the pocket of a Timbers player and slipped a perfect pass to Atticus, who bore down on the Timbers backline like a runaway locomotive, dribbled past his last defender, and slotted the ball home. It was 10-9 Machine, and shortly thereafter the whistle blew to end the game. The Machine went crazy, celebrated on the pitch, and the Timbers all lay on the floor in disbelief, distraught that they had let the Machine run roughshod over them all afternoon.

So there you have it, the Green Machine emerged victorious. Now let's get into specifics, shall we? Let's GBU and MOTM this mofo!

THE GOOD: The Green Machine offense. They had a plan, they stuck to it, and they didn't let the tackles and ball-trickery of the Timbers rattle them - they just kept pouring forward and putting shots on goal, and as you'd suspect with that style of play, good things happened when they did. The Green Machine now hold the record for most goals scored at JWF in the MLS era.

THE UGLY: The uber-porous Timbers defense, allowing the Machine to score at will. YOU WON'T WIN IN MLS DEFENDING LIKE THAT

MAN OF THE MATCH: This whole day was his idea, and it was his goal that sealed the win. This one's all you, Atticus. Guess which one he is? 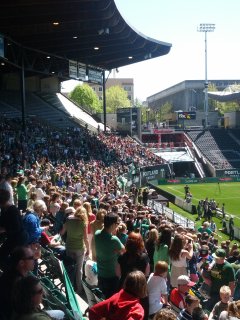 - The Timbers Army completely rebranded itself as the Green Machine Army for the day; all the usual Timbers chants replaced the word "Timbers" with some variation of "Green Machine", and the TA made two-sticks for each player welcoming them, like they do for each Timber for the first game of the season, which they then presented to the Machine after the game. And Atticus got his log slice.

- Every time the Timbers scored, they were roundly booed, and they totally played into it - when Will Johnson scored his first, he wheeled away from the goal, pumped his arms a bit, and held a finger up to his mouth to silence the fans. When Nagbe scored, he cupped his ear at us as we booed, like "I CAN'T HEAR YOU!" It was hysterical.

- Every detail of this was exactly like a Timbers game - all the kids got their pics on the video board as they announced the lineups, the stadium announcer was there doing the announcing, they did a march out for introductions led by the referees, there was a national anthem, and everything was pretty much as you'd expect for an MLS game. The best bit was during that march out - at Timbers games, the TA chants PT (clap clap) FC for several minutes while that's happening, and today the whole stadium changed GM (clap clap) FC while the kids came out. It gave me goosebumps.

- Mikael Silvestre provided the moment of the match for me. He came bearing down on a Machine player (well, not full bore, but you know, "full bore" like when you're messing with little kids) and executed a perfect deadly-looking hook slide in an attempt to steal the ball - a slide that he stopped a full foot short of the kid. There was this brief second of the crowd going a bit still, thinking "WHAT THE HELL IS HE DOING" before we all realized he knew exactly what he was doing. It was hysterical.

- At the end of the match, Timbers captain Will Johnson swapped shirts with Atticus. Johnson then did this: 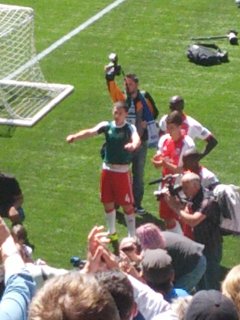 Yep, that's Johnson, proudly wearing the shirt of an eight year old. And I think someone is chopping onions in here because seriously, why else would my eyes be watering right now?

Hyperbole is easy, and cliche'd words are cheap; I like to avoid both wherever possible. But this was easily one of the most inspirational, awesome, amazing, beautiful things I've ever been lucky enough to see in person - these kids got a fantastic day out, the Timbers treated them like royalty, and the fans were so into it that it really added an extra layer of awesome to a lunch hour already full of awesome.

Props, kudos, and whatever else to the Make a Wish Foundation, the Timbers, the Green Machine, and the Timbers Army for making this a truly unforgettable day.