Share All sharing options for: Evaluating Lukas Podolski at centre-forward

Among the fallout from Arsenal's draw with Manchester United last Sunday was the performance of Lukas Podolski at centre forward. For once, the Arsenal fanbase seems to be in agreement; no one seems to think that Podolski played well. There are varying degrees within that assessment, with some never wanting Podolski to play centre forward for the club. That seems harsh, though those pointing out his immobility as the match wore on are correct; Podolski did become more immobile, but there's a perfectly reasonable explanation for his immobility, and that is that Podolski has been struggling with an ankle injury all season, and, in the face of it worsening over the past few months, will undergo surgery this summer to correct the problem. In the opening 30 or 40 minutes of the match, though, Podolski showed enough promise at the role to deserve another chance as Arsenal's centre forward, if not necessarily this season considering his fitness.

The role of Arsenal's centre forward (and for many other teams) is not only to score goals, but also to be involved in build-up play and enhance the team's play, which is why Olivier Giroud has had an alright season, even if his finishing has sometimes been shoddy. Robin van Persie, of course, excelled at this, often dropping deep in the build up before making excellent, late runs into the penalty box, which is how he was so often free in the penalty box and why losing him at the beginning of the season affected the team for a long time. Olivier Giroud has done that on occasion, but Arsene Wenger would prefer him to stretch play, correctly assuming that Giroud's hold up play and flicks aren't so useful deeper. Thus, Arsenal haven't really used a striker that always drops deep and then makes late runs; when Gervinho played there, he moved laterally instead of deep.

That, though, is the type of centre-forward Podolski could very well turn out to be. At Köln last season, Podolski often played as a second-striker. Robin van Persie was a second striker until 2009, and Stevan Jovetic, a reported Arsenal target, is also a second-striker. What Podolski has to work on, and what Wenger will likely work on him, is his movement into the box after he's dropped deep. His link-up play is fairly good; Podolski is a quick and direct passer, which he showed on Sunday, and he continually allowed runners to be go beyond him, as Theo Walcott did for the opening goal, a move where Podolski dropped deep and slipped a pass to Tomas Rosicky. Podolski's movement was ok, and he could've scored twice, but it wasn't sharp enough, resulting in Arsenal looking stunted in the final third. 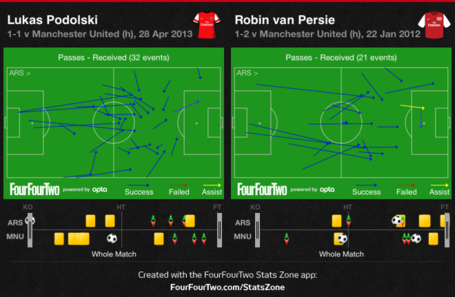 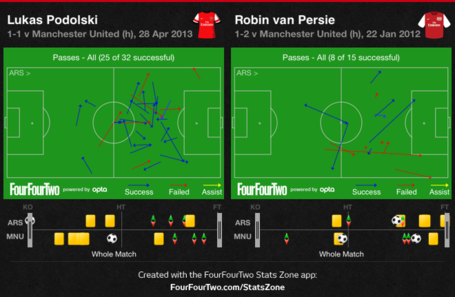 In the beginning of the season, Podolski played centre forward in a goalless draw against Sunderland. His performance wasn't all too dissimilar then as it was on last Sunday:

Podolski could also improve, making more runs into the box, with Arsene Wenger saying as much:

I see him as a centre forward but he has some work to do, to change his game a little bit, make runs in behind to protect the ball and move around the box,

Then, as now, Podolski showed enough promise to be integrated into that role, but with Olivier Giroud offering more of a direct threat, Arsene Wenger went with the Frenchman, and then Gervinho, perhaps because he felt the off-the-ball movement from his wide and midfield players wasn't sharp enough. As the season has progressed, though, the off the ball runs from Arsenal's other attacking players has improved; Theo Walcott, who always makes these types of runs, has scored a career high 19 goals, Santi Cazorla has scored 12, with most from inside the box, and Aaron Ramsey has consistently made box to box runs from his position in the double pivot. That Arsenal didn't persist with Podolski at centre forward is down to the disruptive start of the season, but he's shown enough similarity with the type of second-striker that Arsenal generally use at centre forward to deserve another chance, especially next season when Podolski should be clear of a persistent ankle injury and Arsenal should have a less disruptive summer.