Share All sharing options for: Swansea 0-2 Arsenal: When Pigs Flew

If you looked just at the post-match statistics and presumed one team won 2-0, one would probably suspect the losing side would be Arsenal, who, despite 57% possession had only 9 shots, with none on target, and left too much space on the counter. In most cases, said supposition would be correct, but this was a day where Arsenal avoided the stereotypical Arsenal performance, and instead put in a performance and result that I'm contractually obliged to refer to as ‘professional', with the 2-0 win putting them right back into contention for 3rd and 4th place. It was not the prettiest performance, with Arsenal obviously lacking a bit of energy following their exertions on Wednesday night, but, as Arsene Wenger mentioned in his post-game press conference, they kept fighting until the end.

The obvious change to Arsenal's lineup was the use of the more direct Alex Oxlade-Chamberlain on the left hand side, with Santi Cazorla moving inside to #10. The idea behind this was obvious; Wenger expected, and wanted, Swansea to dominate possession, with Oxlade-Chamberlain and Walcott offering the counter attack option and the trickery to beat individual defenders. The plan nearly came off after 5 minutes; after a spell of Swansea possession, Oxlade-Chamberlain raced clear, beat Angel Rangel before curling his shot onto the crossbar.

Yet the first half was a fairly timid affair, as matches between Swansea and Arsenal this season tend to be. In the 4 league and FA Cup meetings this season, the teams have combined for 9 goals, with all 9 coming in the second half (and 8 of the 9 coming inside the final 15 minutes). The same thing could be expected after a promising start stagnated into a midfield battle: Arsenal pressed higher up the pitch to force Swansea to pass, Brendan Rodgers style, among themselves in their own half, before trying to create quick openings. 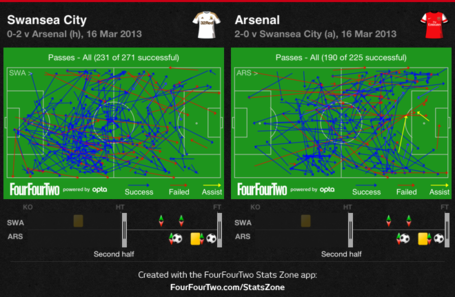 The pressure started to pay off more in the second half, and Arsenal began to dominate. Swansea had more possession, but it was in their half of the pitch, and Santi Cazorla became more and more influential. This was Cazorla at his best; he glided past three defenders to create the chance that led to Nacho Monreal's goal. The subs, though, were crucial; despite having more possession in attacking areas they lacked energy and movement. Bringing on Gervinho and Aaron Ramsey, although unpopular with a number of Arsenal fans, was the right move; Ramsey brought impetus and forward running, and Gervinho replaced the flagging Oxlade-Chamberlain.

And that, in a rather tight match, was the difference. Arsenal's subs were better able to influence the match and give Arsenal the added fight that they needed to get first goal. That Ramsey was able to set up the final goal, for Gervinho, would've further pleased Arsene Wenger, but the way the entire match would've pleased Wenger. Arsenal kept the organisation that they showed on Wednesday evening at Bayern Munich; after an indifferent 20 minutes, they tracked the midfield runners, and dropped deep when required. The dangerous Michu was kept to just two shots, and Swansea had not a single shot on target; a remarkable difference from the last league match where Swansea tore Arsenal to shreds. For once, Arsenal went against the stereotype and pigs flew by.