Share All sharing options for: Assessing Arsenal's options for the North London Derby

Sunday's North London Derby, the most important one since, erm, last season's North London Derby, will have obvious ramifications: a win for either side puts them in the driving seat for third place, while a draw will leave things at the status quo, though Arsenal have an easier schedule on paper than Tottenham. With such stakes, every managerial decision made by Arsene Wenger becomes even more crucial, especially as both club's biggest threat comes from their midfield; Arsenal from Santi Cazorla and Jack Wilshere (and Theo Walcott), while Spurs' big threat is Gareth Bale.

Arsene Wenger has two options for his midfield; he could play the four of Santi Cazorla, Jack Wilshere, Mikel Arteta and Aaron Ramsey, or he could play Wilshere, Cazorla and Arteta and play Podolski on the left side. Both variants have their merits and their cons.

Playing Podolski is probably the more attacking move. The German does about the same in terms of tracking back as Santi Cazorla, but he's not as involved in build-up play. If Podolski isn't fed the ball, he won't contribute. If he does get the ball, though, he can be devastating. Tottenham play a high line under Andre Villas-Boas, and Podolski, along with Theo Walcott on the other side, is the exact type of player to spring Tottenham's offside trap and run onto through balls from Jack Wilshere and Santi Cazorla. This type of movement was instrumental in this season's variant of the 5-2, as Podolski scored one and assisted one and generally gave Kyle Walker a torrid time at right back. This would also allow Wilshere to play deeper, where he's more effective because he gets involved more. Wilshere has not yet totally picked up the ability to drop deep as the main playmaker, as Cesc Fabregas used to, and Wilshere can get on the ball more from a deeper position.

On the other hand, playing Wilshere in a deeper position will affect Arsenal defensively. Wilshere's positional indiscipline has been discussed before on this site, and generally playing Wilshere alongside Mikel Arteta leaves the Spaniard exposed. Arsene Wenger almost said as much last week, when he remarked that playing Wilshere behind Giroud gave the team better defensive structure. In recent weeks, Aaron Ramsey has been playing alongside Arteta, and that gives Arsenal better structure.

The Welshman is an excellent distributor, and is a solid partner for Arteta: he has that endless determination and energy that allows him to make attacking runs and stick with midfield runners. In that sense, he'd help Arsenal trying to stop Bale, as Bale no longer sticks to the left, but drifts inside, usually picking the ball up in the middle of the pitch and running at midfielders. If Wilshere were to play alongside Arteta, he might vacate more space, and Bale against Arteta isn't a favourable matchup. With Ramsey alongside, Arsenal will have a better screen in front of their defence. 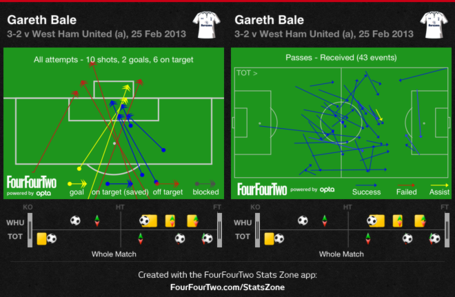 That would mean Santi Cazorla would play on the left, as he has been in recent weeks. That is perhaps the best matchup against Kyle Walker; Spurs right-back has no problem with pace, but skill can sometimes lead him in knots. With Cazorla drifting in, it would also allow Arsenal to outnumber Spurs in the midfield, and overload Scott Parker, who has been having a torrid time this season, and Moussa Dembele. It would take away the pace option of Podolski, but it would allow Arsenal to fit as many creative players as possible, something which has seen them become a much more consistent attacking force in recent weeks.

In recent weeks, Arsene Wenger's decisions have been rather simple; Aston Villa, Sunderland and Stoke were all going to be tough teams to break down, so playing a more creative player than Lukas Podolski wide made sense. Tottenham aren't going to be as defensive as those three, but they also have, arguably, the most in-form attacking player in the country, something that will have Arsene Wenger concerned even if he denies so in his press conference. There are pros and cons for both systems, but given Arsenal's performances in recent weeks, one suspects Wenger will play Cazorla wide left and Ramsey alongside Arteta.