Samir Nasri's career looked full of promise after the 2010/11 season, and when he left Arsenal for Manchester City, it looked like a move that could help him reach another level. That hasn't happened, though, and his career has kind of stalled.

Share All sharing options for: How Samir Nasri's Career Stalled at Manchester City

It's often forgotten how that after Arsenal beat Chelsea at the Emirates on December 27, 2010, the home side were a mere two points behind leaders and eventual champions Manchester United. Being in that position was even more impressive given that Robin van Persie had played all of 75 minutes until the Chelsea game, and Thomas Vermaelen had played in just three games all season. Cesc Fabregas' season had also been injury plagued, and while the team was helped the a superb Jack Wilshere, the main mad had undoubtedly been Samir Nasri, who had scored 13 goals by January 1st. Some of the goals had been fantastic too; the finish from a near impossible angle versusTottenham in the North London Derby, the searing volley against Aston Villa, brilliant one-two with Andrei Arshavin against Manchester City and simply wonderful pirouette dribbles leading to goals against Fulham, twice, and West Bromwich Albion. Nasri, though, slowed down in the rest of the season, scoring just two times after New Year's Day, with two assists in the period. With only one year left on his contract, he left in acrimonious circumstances in the summer of 2011 to join Manchester City.

On the face of it, Nasri's move to the Eastlands has been successful. He gets paid the amount he desires, close to £200,000 per week, and has a Premier League medal to his name. But if you look past his financial rewards and silverware, the move has actually been quite disappointing and damaging for Nasri's career; last year, James Milner was preferred in the big games, and this year Nasri has been limited to, because of form, fitness and suspension, just 12 league games, with one goal and three assists. Yesterday, against Liverpool, Manchester City needed to win, and were trailing Liverpool by two goals to one. On came Maicon, for no apparent reason; Nasri eventually got 5 minutes but was effectively left on the bench, even as David Silva came off with injury. He's not been recalled for France after his suspension for swearing at journalists during Euro 2012, where he failed to influence the French team for large parts of the tournament, despite being deployed at #10, behind Karim Benzema.

Nasri's Manchester City career got off to a brilliant start, with 3 (more than he had in the league in all of 2010/11 for Arsenal) assists in his first game, against Tottenham, in a 5-1 City victory. On the left of a 4-2-2-2, Nasri was fantastic in a more playmaking role, creating 11 chances and failing to misplace a pass in the final third. It was, theoretically, a role that should've allowed him to improve as a player, and express his creativity; Nasri could drift in front of a base of Gareth Barry and Yaya Toure and interchange with David Silva. Nasri had always wanted to be more of a playmaker, and early on, given the chance, he flourished. At Arsenal, Nasri had rarely been at his best as a playmaker, playing much better as what Arsene Wenger described as a half-winger, where he got him to not seek the ball so much and make better off the ball runs. The improvement he made in off the ball runs culminated in Nasri scoring 15 goals. He also played as a creative player, but that was shown more in excellent one-touch passing and dribbling, rather than through balls. The way he played is perhaps best exemplified in Arsenal's 3-0 victory against Birmingham on New Year's Day, 2011. For City, he didn't make so many off the ball runs, resulting in a lack of goals. This was ok as he was still contributing with his passing play, but that would change. 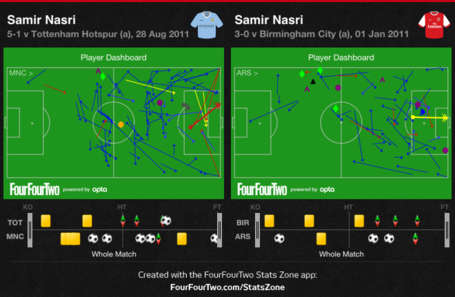 As the autumn wore on, Mancini would routinely yell at his £24m signing for his lack of defensive work, and Nasri's play suffered as a result. His performance away at Liverpool that November was Nasri at his worst: playing within himself, passing square and backwards with only 17 passes going forward (out of 38). It's this Nasri, a player devoid of creativity and invention, that we've seen more of, as his development had stalled. At 25, he should be entering his prime, but as Roberto Mancini has stripped him of some of his creativity, Nasri has failed to adapt to such a change, meaning that he's now behind James Milner and possibly Alexander Kolarov for big games. At this stage, he'll probably have to leave City and Mancini to re-energize his career. 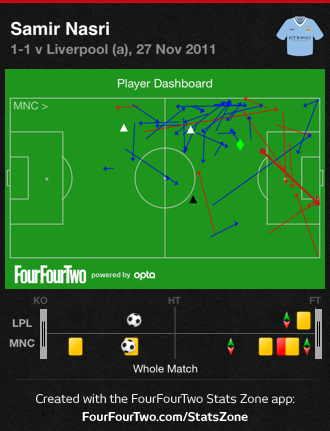 A return to Arsenal might be the best for the player, but it likely wouldn't be well-received by the fans, and his best role, of quick, one-touch passing, has been ably taken by Lukas Podolski. Nasri always claimed that Arsene Wenger had done the most for him in his career; it's becoming more puzzling why he then left him.