Share All sharing options for: Arsenal Man of the Match: Santi Cazorla

Santi Cazorla has done a lot of things that he's never done before this season. Into double-digits in goals, and today he's won another prestigious award, The Short Fuse Mikel Arteta Memorial Man of the Match award. Despite being a midfielder that has only gotten above 5 goals three seasons in his career, Cazorla was Arsenal's best finisher today, coolly finishing into the bottom right corner on two occasions.

The first goal was a little lucky; Cazorla probably didn't expect Nathan Baker to clear the Spaniard's cross straight to him, but after receiving the ball, he took one step to set himself, and another to finish. There was nothing fortunate about the second goal, though: Wilshere's lovely clipped pass set Nacho Monreal off, who's first touch was a pullback to the edge of the 6-yard box, which found Cazorla rushing in. His first touch was a shot that went past the despairing Brad Guzan. Three touches, two passes, one shot, one goal. That's Wengerball, people. And it's starting to fit a greater trend.

It wasn't only the goals that made Cazorla excellent, though; it was the all-around play. He was, for most of the match, the left-sided player, but such distinctions didn't have a negative effect on his influence as he created 4 chances. While that can sometimes be a misleading fact, 3 of the 4 chances were created by a through ball, and they all put the shooter in a good scoring position. 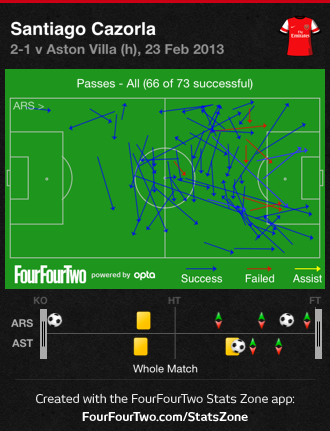 Cazorla's control, was also exemplary. One perfect example was in added time, when Cazorla, under pressure from the much bigger Ciaran Clark, controlled a long ball from Wojciech Szczesny, and turned Clark. He also added a couple of tackles and interceptions for extra.

It's the goals that make the biggest difference, though, and it's rather pleasing to see him get into double digits. Not many expected him to do so, but he seems to have a Samir Nasri-like affinity for making good, off-the ball runs; in fact, Cazorla seems the type of player the Arsenal coaching staff wanted Nasri to become; a devastatingly effective goal-scorer and creator (though not a controller of the midfield which differs him from Cesc Fabregas), who had brilliant close-control and was a fighter all-along the pitch. It may not have worked out for Nasri, but, thus far, it's working out for Santi Cazorla.