It's back to business for Arsenal after a wild day yesterday, as they welcome Stoke City to the Emirates as the Gunners look to move up the table on their rivals

If you buy something from an SB Nation link, Vox Media may earn a commission. See our ethics statement.

Yesterday was a blast. I had fun covering Deadline Day for the first time here at The Short Fuse, and I definitely look forward to doing that again. After some reflection, it's easy to see there's two schools of thought when it comes to the expectations we hold for the club regarding its dealings in the window, and I think we need to merge them both towards the center to establish what I believe to be a true, rational view. I'll be the first to admit that my conservative viewpoints towards Arsenal are a touch extreme. Just like I think the school of thought that spending as much of the available resources as possible in each of the windows is extreme. I think I might have overreacted a couple of times when responding to those who hold opposite views (*coughDjax10cough*), so I apologize if any were offended or taken aback. In the end, we all support the club very passionately and ultimately we all, including me, need to put in a better effort at finding a common ground that we can agree on and move forward as a supporter group who's united as one.

So now that I have that out of the way, let's move on to something I think we all agree on, and that's our opinions about the lot from Stoke. If any of you out there were as fortunate as Aidan, Thomas and me, you were able to watch the coverage on Sky Sports yesterday as field reporters were dispersed to various clubs as they breathlessly reported the transfer actions as it happened (also, I think I'm in love with Kate Riley; hopefully my wife understands). In between the repeated clips of Harry Redknapp and the hilarious, now-infamous Peter Odemwingie car interview, they went live many times to some poor sucker who had the misfortune of standing outside of Stoke's dog park while the local denizens, who display such strikingly-similar facial characteristics that's common with inbreds, possessed the sort of behavior consistent with armed robbers.

I mean, take a look for yourself. You can smell the stale ale breath through those pictures. That reporter looks as excited to be in Stoke, around those fans, as one is generally excited to get a doctor's finger up the bum during a prostate exam. And who can blame him? He got dispatched to Stoke. Richard Engel smiled more reporting from Syria prior to being kidnapped by Assad loyalists than this guy did yesterday. All of this is to say, again: f*ck Stoke.

Moving on to team news, Arsene Wenger imparted truth in his comments today regarding the fragile mental state of his squad, keying in especially on the defense:

"We have scored many goals (this season) and, even against teams like Liverpool, we had so many chances to score, but we lack the serene side of a game you need as a home team," Wenger suggested. "We produce quality football, but we don't take enough advantage of it.

"Against Liverpool, look at the numbers - the shots on goal, the penetration in the penalty area, the possession domination. You should come out with three points. We need to get the nervous side out of our game."

It's apparent that there is a host of talent in our defense, but for whatever reason have confidence issues at the moment. If you count Kieran Gibbs' recent call up, we have a back four/five that are all experienced, recent international players from such powers as England, France, Germany and Belgium. If it's down to tactics, that they're struggling with Bould's philosophies or whatever the case may be, then truth be told it's on the players at this point. They've had time in training and enough matches up till this point to recognize the strategy being imparted and then going about executing it to perfection. Allowing as many goals in the opening minutes of the match, as they have done with alarming regularity so far this season, reeks of a lack of confidence. While Stoke aren't nearly as dangerous in the attack as Liverpool, they still can put an odd goal in the net and thus shouldn't be taken lightly, so hopefully the defense can put together a complete match, playing as a singular unit and weaving in perfectly with our attack.

Injury and Squad News: Kieran Gibbs, as Aidan wrote, is now out for up to two months. Mikel Arteta, though, appears set for a return tomorrow after being out the past few weeks with a calf injury, and new signing Nacho Monreal might feature due to Gibbs' injury and Santos being our only other legit option at left back. How Wenger decides to integrate Arteta back into the starting lineup should be something to watch out for, since Aaron Ramsey performed better than expected while deputizing for him.

Beer of the Week: Fulton's Worthy Adversary Mole on cask: 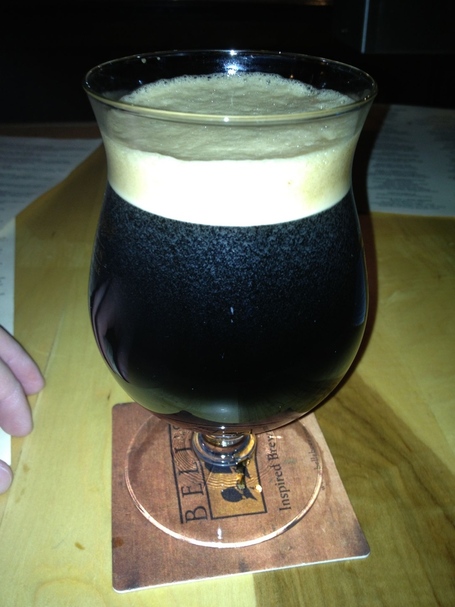 This beer is simply amazing. Fulton took their Worthy Adversary, a russian imperial stout brewed with coffee and rich with chocolate flavors, and added a heaping of cinnamon, ancho chiles and cocoa nibs. Since this was a cask beer, it had the same consistency as french silk pie, smelled like the best dessert I've ever had and tasted like sex. Oh, and tonight they're tapping a cask of Worthy Adversary brewed, this time, with macadamia nuts and coconut. There should be laws against having this much fun.

Arsenal vs. Stoke City: Gunners eke out the win