Stop me if you've seen this film before: Jose Mourinho's Chelsea comes to the Emirates, plays a deep block of 7 or 8 men behind the ball, and grind, foul and cheat their way to a 0-0 draw. It was a fairly familiar story, and may explain why Wenger has never beaten Mourinho in the league, but, for all the self-publication about that record, Mourinho only has two wins in seven league matches against Wenger, with both wins coming in 2005/06, the year when Wenger gathered the fewest points in his 17 years at the club.

Chelsea's strategy, though, worked. Arsenal were held to 7 shots, while Chelsea, playing on the break, had 13 shots. Arsenal, foiled by Chelsea's defensive game and the conditions, struggled to play their incisive passing game, especially around the box, where a wall of blue shirts forced Arsenal to pass back, or blocked and cleared everything in sight. Arsenal's defensive strategy, conversely, was more open, making Chelsea's counter attack an obvious threat. There were two excellent chances that came on the counter attack, the first, Frank Lampard's crossbar rattling shot, exacerbated by Thomas Vermaelen stepping out, one of the only mistakes he made on the evening, and the second, Willian's curler, coming after he exploited space left behind by Bacary Sagna. But Arsenal's defensive organisation, on the whole, was good. They looked far more like the side that started the season so well defensively, rather than the one that had conceded 9 goals in their last 3 matches. 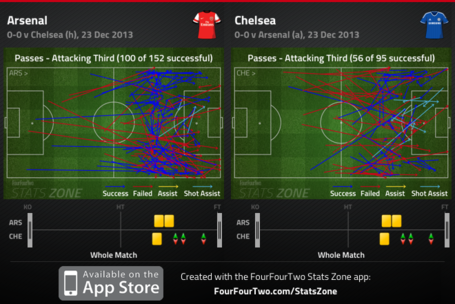 In recent weeks, Mikel Arteta has been left more isolated by Aaron Ramsey's more forward play; the Welshman often leads the pressing and plays higher up the pitch to try and make decisive passes or goal-scoring runs. Ramsey still did this, but what was interesting was how the side reshuffled to compensate for Ramsey's forward bursts. When Ramsey pressed, for example, Mesut Özil dropped to the left hand side and Tomas Rosicky, a player that Wenger likes in big games not only for his obvious quality but also tactical intelligence, dropped in alongside Mikel Arteta. Ramsey, for the most part, had a poor game, giving away possession cheaply on multiple occasions, but he also created one of Arsenal's two great chances, chipping a lovely ball over the Chelsea defence for Olivier Giroud. When he played that pass, Rosicky had dropped deeper, giving Arsenal protection on the counter attack, which allowed Ramsey to get forward. Based on that, one can see why Arsene Wenger didn't make any changes; even bringing on Santi Cazorla for Rosicky could've upset this balance, and, as Wenger said after the home match against Dortmund, if you can't win, don't lose (especially against a title rival, where a point each means the other side drops points too. Obviously if this was against, for example, WBA, Arsenal would've gone for it).

After the match, Jose Mourinho said that they let Mikel Arteta have the ball, knowing he'd pass side to side. This seems like another case of Mourinho's egotistical "LOOK AT ME AND HOW SMART I AM" behaviour, not least because it isn't true. Arteta played 17 passes to Aaron Ramsey, 16 to Tomas Rosicky, 14 to Thomas Vermaelen and then 12 to Bacary Sagna. So his two most frequent passing combinations were to Arsenal's more attacking midfielders, and then his fourth most was to Bacary Sagna. Furthermore, Sagna was often Arsenal's outlet on the right hand side and one of Arsenal's more dangerous players, with two very good crosses. 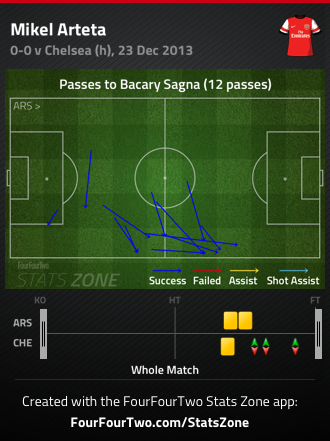 Arsenal didn't play well, but they did create two excellent chances. One was well defended by John Terry and Petr Cech, and the other was horribly miscued by Olivier Giroud. Arsenal will now face Sam Allardyce, who really is the original Jose Mourinho, though astonishingly without as much self-aggrandisement, and popularised the parking the bus style of play against Arsenal.