Man of the Match: Mikel Arteta

It wasn't an easy decision, but a superb performance from Mikel Arteta gave Arsenal the base to beat Liverpool.

Share All sharing options for: Man of the Match: Mikel Arteta

Prior to the match, most experts fancied Arsenal to struggle in the absence of Mathieu Flamini, Arsenal's charger extraordinaire, and an understated reason for their good form (if all the pundits say Flamini's been understated does he not become overstated, or, at the very least, stated?). This is why most pundits should be ignored, because when they argue that Flamini is a vital need for Arsenal, they also imply, directly or indirectly, that Mikel Arteta doesn't have the defensive ability or tactical nous to play the holding midfield role that he played so successfully last season. Fortunately for fans of rational thought, Arteta's performance was highlighted even by Alan Shearer on Match of the Day yesterday, which goes a long way to saying how good Arteta was.

Playing alongside Aaron Ramsey, Arteta made 7 tackles and 2 interceptions, and was key in denying space for Luis Suarez, who likes dropping deep, to exploit. He was also key in stopping Liverpool creating for their front two, even after Philippe Coutinho came on to provide more creativity. With Aaron Ramsey playing a box to box role, Arteta could focus on deploying himself in a deeper position, helping Laurent Koscielny and Per Mertesacker maintain a numerical superiority over Liverpool's attack. Thus, Arteta's defensive efforts are slightly deeper than Ramsey, showing that Arteta was very much playing a holding role. 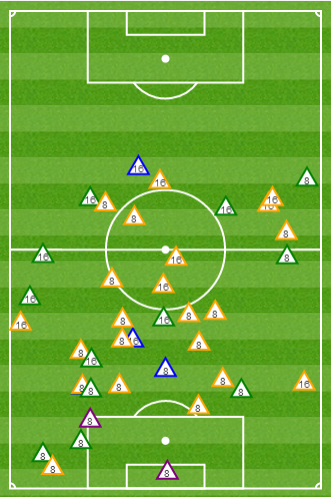 That didn't, though, prevent him from influencing Arsenal's attacking play. Arteta completed 100 out of 106 passes, and was the top provider to Tomas Rosicky and Bacary Sagna, and the second top provider to Mesut Özil. Of Arteta's 106 passes, a little over 60% were forward, including the sparkling through ball that set Bacary Sagna off to cross to Santi Cazorla for Arsenal's opening goal. Arteta picked the ball up in a deepish position, drove forward, and then played the ball for Sagna. Moments later, with a minimum of fuss, Arteta won the ball of Daniel Sturridge, and played the ball forward for Aaron Ramsey to start Arsenal's attack; something he did all night. Arteta's possession play was also crucial when Arsenal played keepball as a defensive mechanism, as they did often in the second half, and at the end of the first. It's a tactic Arsenal do more of these days, and works out far better when Arteta is playing. With that defensive impact, and with Arteta the tempo-setter of Arsenal's attack and possession play, Arteta is a worthy winner of the man of the match award. 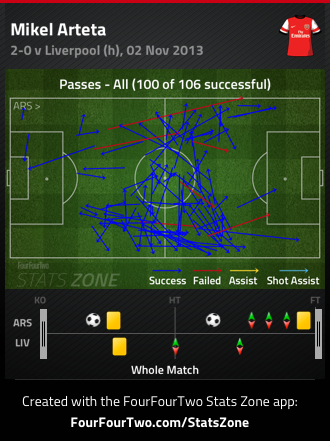