Arsene Wenger has begun the process of changing this season, but if Arsenal are going to be successful this season, he'll need to continue changing.

Share All sharing options for: Arsene Wenger needs to continue to evolve

Personal changes that Arsene Wenger has made this season have been a big reason why Arsenal are top of the league. Signing Mesut Özil, for example, and finally doing tactics are two major changes Wenger has made. If Arsenal are going to be successful, though, Wenger is going to have continue his biggest evolution: leaving the comforter jacket behind. We get it; change is hard. Change is never an easy process, and when that jacket has been a major part of Wenger's tenure at the club, it's easy to understand why there'd be attachment to it. Plus, and this is crucial, it's a bloody warm coat. But when the results have been as conclusive as they have been, Wenger has to be ruthless, and ditch the jacket. Here's some pictorial evidence: 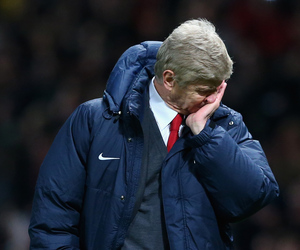 That's Wenger, yesterday. He's wearing the jacket, and he's got that familiar face of frustration, with an added facepalm. Obviously, the jacket was communicated to the team, and led to a timid, nervous first half performance 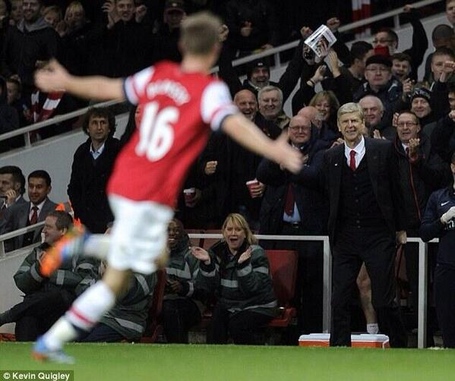 And there's Wenger last Saturday, celebrating Aaron Ramsey's goal. The cardigan is prominent: with it, Wenger can do the right thing, and leave his suit jacket unbuttoned. The whole style of dress gives players like Ramsey the confidence to be more audacious, and try things like a superb volleyed shot from 30 yards.

Wenger has worn the cardigan throughout Arsenal's good run in the Premier League, but left it off for games at home against Borussia Dortmund and Chelsea. The evidence is clear: with the cardigan, Arsenal are transformed into the best team in the league, and a contender in Europe. Without it, they're rather, well, ordinary. Furthermore, with the cardigan, Wenger is the best dressed manager in the league. Andre Villas Boas wears a Mac, which is the purview of dodgy men, and Jose Mourinho was wearing two tracksuits, making him look like a tramp.

Wenger, though, looks sharp and classy, which is a damn more than what anyone can say about his competitors. That sharpness is communicated to the team, so the answer is clear: If Arsenal are to win something this season, Wenger must wear his cardigan to all matches.