It's the shape that matters: Arsenal's defending and attacking width

Share All sharing options for: It's the shape that matters: Arsenal's defending and attacking width

Sometimes, possession doesn't tell the full story. Arsenal had the most amount of passes in a Premier League match on Saturday, yet for large portions of the match, save for a 10 minute period around half-time and a 10 minute period towards the end of the match, they didn't really threaten the Premier League's worst defence. They were, in fact, outshot by Palace 13-10, though again, this doesn't tell the full story: only one of Arsenal's shots came from outside the box, as opposed to eight of Crystal Palace's shots.

For a large portion of the match, Arsenal passed their way into control, and when they didn't have the ball, they dropped deep, forcing Palace to shoot from range. It's a strategy that's worked for most of the season, with Arsene Wenger and Steve Bould confident that Wojciech Szczesny can deal with most shots from range, which he proved again with a stunning save from Mile Jedinak on Saturday.

Penetration, though, has to come from somewhere. Arsenal are becoming more of a counter-attack team, which explains why they are focusing on shape and defending deeper. By defending deeper, it opens up space on the counter attack, and, by retaining possession in non-threatening areas, Arsenal can entice opposition defences to come out and thereby open space. They are also, though, pressing at times--usually when they've given the ball away, with the midfield and forward line hunting the ball down before dropping deep, in a fashion not entirely too dissimilar to the best of Pep Guardiola's Barcelona. With so many games, though, and so many injuries, it's difficult to maintain that intensity, and thus there must be times when Arsenal drop deep and concede possession, in an effort to conserve energy, and open space. On Saturday, though, Crystal Palace never really came out as a unit--perhaps out of adherence to Keith Millen's tactical instructions, or out of fear: when one is bad at something, as Palace are at defending, there is something comforting in remaining in a shell. 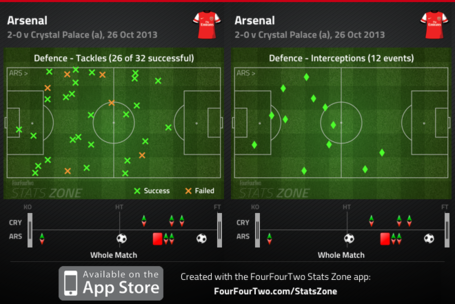 Arsenal's defensive strategy: Will press quickly, before dropping into shape if ball not won back. That's why there's more tackles in the Palace half of the pitch, and more interceptions in the Arsenal half.

With three creative players in Mesut Özil, Santi Cazorla and Aaron Ramsey, Arsenal probably shouldn't have struggled to create chances as much as they did on Saturday. There are, though some reasons for that: Palace's numbers, Arsenal's tiredness, making the passing not as sharp and crisp, and the absence of forward runners. Aaron Ramsey, who was a little more subdued until the sending off of Mikel Arteta, didn't make as many forward runs as he usually does, and Arsenal are missing Theo Walcott. In Walcott's absence, three creative players have often been deployed behind Olivier Giroud, which should highlight Walcott's importance: as Cesc Fabregas says, "you also need that type of player because it is true that at the end of a move, after that pass, pass, pass, you need a Pedro: someone who will get behind the opposition, who gives depth, stretches the attacks, and seeks out the space. You need a Walcott".

With that in mind, Serge Gnabry was extremely important on Saturday, and contributed to the first period of sustained Arsenal pressure. He provided width on the right hand side, and a directness that was lacking in the other Arsenal players. The width is important: when facing teams that defend deep, getting behind and stretching play is generally how a side will make a breakthrough, and Gnabry did that on two occasions. The first time, when played into space by Bacary Sagna resulted in a foul that should've been a penalty, and the second time, when played in behind by Ramsey's flick, resulted in the penalty that gave Arsenal the lead. Moments later, when making a diagonal run from the right, Gnabry could've extended Arsenal's lead, but was a touch slow in getting to Olivier Giroud's through ball. 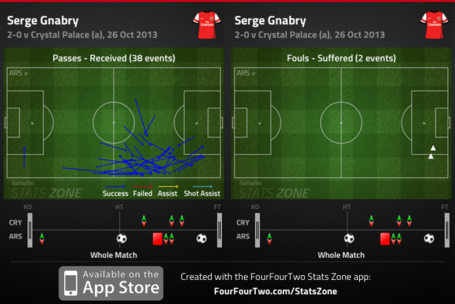 Importantly, though, when Gnabry was sacrificed after Mikel Arteta's red card, that width was maintained, if not increased. With Nacho Monreal on the left, Arsenal had more width, as the left back-cum-winger is more likely to stay wide than compatriot Santi Cazrola, and on the right, Mesut Özil continued his preference to drift to that side, and even drift to the touchline. Özil's movement allows for Arsenal's other creative players to move into the centre, and, if Arsenal were to play three of Özil, Cazorla, Rosicky and Jack Wilshere, the natural movement would likely be enough to create width for Arsenal.

That, though, doesn't totally replicate what Walcott brings; while Özil is quick, he's nowhere near Walcott's level of pace. The big difference, though, is the difference in runs that the two make. Walcott is far more direct in his off-the-ball running, and thus, creates the spare man to be found by passes. If there is one weakness in Özil's game, it his goal record. Similar players, though, have improved under Arsene Wenger's tutelage, and while it is a small sample size, Özil is taking .6 more shots per game this season with Arsenal as compared to last year with Real Madrid. On Saturday, he made an off the ball run Walcott would be proud of, and was found by Monreal, and his assist for Olivier Giroud's goal against Napoli was fairly Walcottian. He doesn't, though, make as many runs into the penalty box as Walcott, something which would need to be compensated by midfield runners such as Aaron Ramsey. 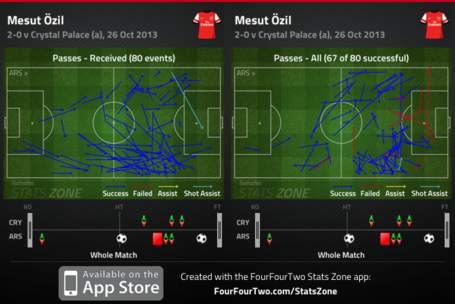 Of course, playing the best #10 in the world in a wider position isn't ideal, but it may have to be how Arsenal cope for the next couple of weeks. One of the big issues against Borussia Dortmund was a lack of width to exploit Marcel Schmelzer; when Cazorla came on, Özil was able to drift more to the right flank, and Arsenal had a far better second half. With crucial games against Liverpool and Manchester United, he may have to do the same thing. If Wenger wants to go for another approach, though, he could do far worse than select Serge Gnabry, who is growing into the right-wing position. It isn't ideal, but, as long as there's space to exploit, the likes of Ramsey, Özil, Rosicky and Cazorla will use it.

Next Up In Soccer