It may have been against a limited West Ham midfield, missing two starters in Mohamed Diame and Joe Cole, but Aaron Ramsey was superb in a more unfamiliar deep-lying midfield role. Ramsey's played in Arsenal's double pivot before, but prior to yesterday evening, Ramsey had never been the more defensive of the pair, with that job falling instead to Alex Song, Francis Coquelin, Emmanuel Frimpong or Mikel Arteta. Yesterday, Ramsey was partnered with Jack Wilshere, who most certainly was not going to be the more defensive member of the pair. Ramsey took to the role with ease, though; he completed an astounding 117 out of 123 passes, with just over half of his completed passes being forward, while also leading Arsenal in passes completed in the final third, including a glorious flicked pass to Santi Cazorla, that led to the corner that gave Arsenal the lead. Thus, not only did Ramsey keep possession, and keep Arsenal ticking over, but he also drove Arsenal forward. One noticeable difference from Ramsey was that he didn't take extra touches or dwell on the ball so much, showing more confidence in his passing ability. It remains to be seen if this deeper role is a better position for him, but given that he's got boundless amounts of energy, good positional discipline and covering play, highlighted by his 3 tackles, interception and goalline clearance, a box to box role may be where he's best.

2. This is how Arsenal should play

A flourish of goals, 4 in 12 minutes, saw Arsenal run away from West Ham and make the remaining 33 minutes a mere formality. Yet, it wasn't just the speed in which Arsenal scored their second half goals, but, also, the way they scored all of their goals. Often, Arsenal struggle against Sam Allardyce-managed teams because of their tendency to defend deeply and provide a threat on the counter attack. Faced with a goal-deficit, Arsenal responded immediately with a rare long-shot. The second goal came from a corner kick, and then the third goal, straight after, was a brilliant team goal from open play. After that, West Ham had to come out, and Arsenal were devastatingly brilliant on the counter attack, with the passing of Wilshere and the pace and crossing ability of Podolski too much for West Ham's high backline. Only after Sam Allardyce shut up shop and moved to a back 5 did Arsenal not look like scoring every time they went forward.

Their success last night gives a good blueprint for how Arsenal should aspire to play: break teams down from open play by pressing, and playing with a fast tempo, and then dropping deeper and hitting them on the break. Yesterday, the positioning of Arsenal's wide players, so crucial for the counter attack, and the distance between their defence and midfield was excellent, even when they dropped deeper. If they play like that, they should be able to go on the run they need.

3. Olivier Giroud is starting to fit into Arsenal's style

Despite adjusting to a new league and a team that was in transition and wasn't exactly sure of its own style, Olivier Giroud has had a fine debut season. His double yesterday took his tally to 11 goals and 8 assists, which isn't a bad haul at all. At times, Giroud has looked uncomfortable with Arsenal's style of play, not looking exactly sure what his role is. Recently, though, Giroud has looked far better, contributing assists even when he doesn't score, as he did in both cup games against Swansea. His penchant for a lifted pass over the top of defenders is extremely devastating, almost as devastating, if not more, than Alex Song's lofted through balls. Yesterday featured another one, his third this season, for Lukas Podolski, who then squared to Santi Cazorla to backheel in. By being able to make such passes, and other passes like the flick for Jack Wilshere last week versus Swansea, means he can come deep and enable midfield runners to make runs beyond him, giving Arsenal's play more fluidity. His runs, as ever, remain very good; the corner he scored from was straight off the training ground, but his second goal showed a poaching instinct.

4. Kieran Gibbs is as important as Santi Cazorla

Another Premier League game, another very solid performance from Kieran Gibbs. The 23-year old is Arsenal's 4th highest provider of chances, and is an extremely important outlet on the left hand side. His forward runs allow Lukas Podolski to come inside, as he did on Arsenal's third goal. Without Gibbs, the team would be imbalanced; Walcott is more likely to stay wider on the right, but without Gibbs' forward runs, it'd be easier to crowd Arsenal out of the middle. Because Gibbs is a winger-turned-left back, he's a far better crosser than Bacary Sagna, and he's also an excellent, darting dribbler. He's also been excellent defensively, with the most interceptions and the second most tackles among the entire team. When Arsenal pressed yesterday, he was extremely important in winning the ball back quickly and starting attacks, evidenced by his 9 passes to Aaron Ramsey, 8 passes to Lukas Podolski and 7 passes each to Jack Wilshere and Santi Cazorla. After the Gael Clichy era, where Arsenal's left back was almost a negative in attack, Arsenal seem to have returned to having the left back be a key attacking player. 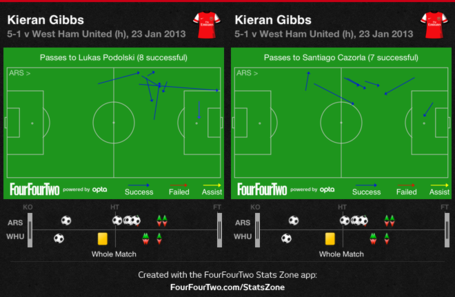