Earlier, Jamie Dalton tweeted a link to Arsenal's Champions League squad - that is, the players that Arsene Wenger has deemed ready and useful to play in the competition's group stage for this year. There were a few surprises in store, but honestly only one surprise is really a surprise, if you remember how squad rules work (which I did, after a moment, but before most of Twitter did).

In short, there's a player you may not expect who's been included in the list, and a couple of players missing who might briefly terrify you. But there is no need to worry, at least not about this. 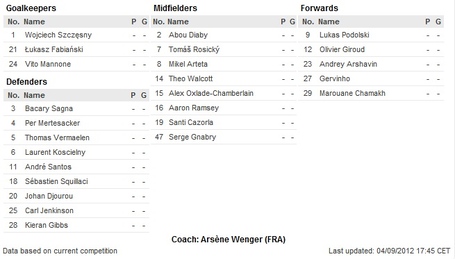 That all makes good sense, right? You may notice something here, though (again, click for full size): 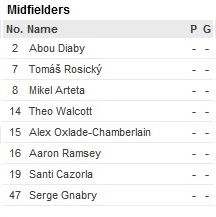 Young Serge Gnabry (!) is in the squad as a midfielder. On the other hand, Jack Wilshere and Francis Coquelin are not. CRISIS.

Only it's not, really. When I first saw it my thought was "oh goodness, what's happened to Le Coq," and my second thought was "OH NO JACK," because I forgot something very important about them: they're young, and have been at Arsenal forever. Let's have Orbinho explain:

Players under 21 have to have been at the club for three years to avoid having to go in the 25-man A list. Jenkinson & Gnabry have not.

You can check out the full rules here. But you don't have to, because those tweets sum up what's in the rulebook right here: Jack Wilshere's been at Arsenal since 2001, and Francis Coquelin has been a Gunner since 2008. They're both eligible as U21s (even after significant first-team experience) as they meet the age requirements and have been here for over three years. Gnabry, Alex Oxlade-Chamberlain, and Carl Jenkinson all signed here last summer, so have not been here three years. Because of that, they had to be among the 25 players declared.

This doesn't temper the fact that Gnabry has been included, though - this is an unexpected step currently for a promising young player, and it's a big statement by the manager for him to hand the young German this chance, even if Sebastien Squillaci is also in the squad.