Sometimes, Arsene Wenger says outlandish things that one guffaws at, but, he often seems to have the last laugh. When he said Abou Diaby is the first name on the French teamsheet when fit, many Arsenal fans rolled their eyes, but if Diaby remains fit and continues to play like he did yesterday, Arsenal will not miss Alex Song. The concern, of course, is that Diaby, with his horrific injury record, will not stay fit, but that is not the purpose here; instead, the purpose is to see how Arsenal seem better equipped with Abou Diaby in their midfield.

The big change from last season is that when Arsenal are in possession, Mikel Arteta sits back to help Arsenal defend on the counter attack, and initiate attacks. Last season, Arsenal's midfield was more fluid, and while that led itself to be unpredictable and lead to more creativity in attack, it also created lots of space in the midfield for opposing teams to exploit, much like Arsenal did against Liverpool's fluid midfield three on Sunday. The other change is that Arsenal's defensive strategy is no longer to heavily press the opposition; instead, Arsenal press initially then drop back to form a solid, compact, group of the back four and four midfielders, while maintaining a high line. This high line constricts the space in front of Arsenal, while making it harder to attack Arsenal's penalty box if they get their offside trap right, which they have been doing. 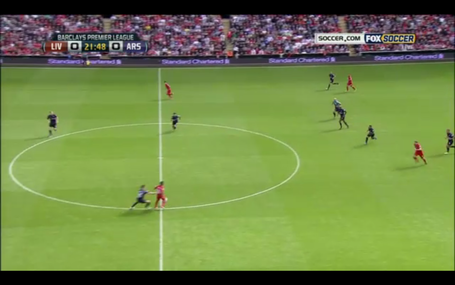 On a break, Arteta has stayed back, as has Jenkinson and Mertesacker. Mertesacker goes with Suarez, as does Arteta, while Jenkinson pressures the ball.

This season, there are more defined roles for Mikel Arteta and Abou Diaby; Arteta, as we have said already on this site, is the sole holding player, who rarely pushes forward, even when Arsenal have possession. Diaby's role is the interesting one; he obviously had defensive duties, as he effectively man-marked Steven Gerrard out of the game, but he has also taken on the attacking roles of Arteta and Song; as Match of the Day correctly surmised, he moves the ball on simply like Arteta did last season, and he also brings physicality and driving runs from midfield. These driving runs are incredibly important; not only do they create space, but they also quicken Arsenal's transitions, as evidenced by his barnstorming run and then pass for Olivier Giroud. 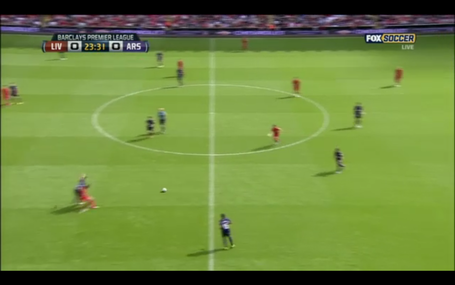 With Liverpool in possession, Arsenal have settled into a solid, compact group. Jenkinson follows Sterling, while Arteta and Diaby are in the midfield. Then... 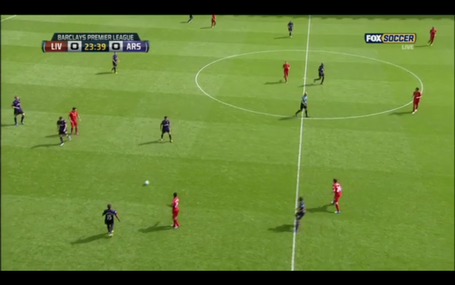 Arsenal win the ball. Diaby's pushed forward in anticipation of attack; Arteta is set to initiate the attack. Oxlade-Chamberlain has dropped back to cover Jenkinson, as does Podolski on the other side, before driving forward.

Diaby, though, is one of the few players who can combine physicality, driving runs and finesse in his passing game, as well as a solid defensive game. The other player in the Arsenal team who can is Jack Wilshere, and Arsene Wenger will be anxious to have Wilshere back, and be able to rotate his team more, and perhaps play Santi Cazorla out wide. While someone like Aaron Ramsey or Tomas Rosicky, or, in the future, Chuks Aneke, could be converted to such a role, but it's not hard to see why Arsene Wenger reportedly wanted Michael Essien; Essien, if he returns to his old form, could be such a player.

For the meantime, though, Wenger will have to hope Diaby retains fitness. He's shown an understanding for the dual purpose of his role, saying that "I am not like Alex Song. We have many players who can take his place like Francis Coquelin or Mikel Arteta, who likes to play deep. I want to get forward - that's me.

"I have defensive duties as well so I need to have a good shape defensively and, as soon as we get the ball, go forward."

The emphasis on shape also makes one wonder about the possible influence Steve Bould has had on the side; certainly, Arsenal have looked much stronger at the back against teams that usually cause them problems in defence. With this new defensive strategy, there's certainly not the threat of exhaustion as there is with heavy pressing, and, with Mikel Arteta exclusively holding, it allows players like Kieran Gibbs to get forward without worry, with Gibbs playing almost as a winger with Podolski playing inside right. On Sunday, Arsenal showed their attacking game, and Abou Diaby showed his influence when he's fully fit; Arsene Wenger will hope that both long continue. 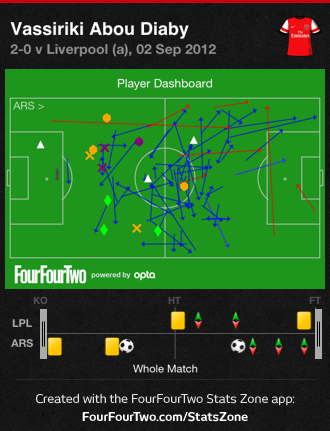 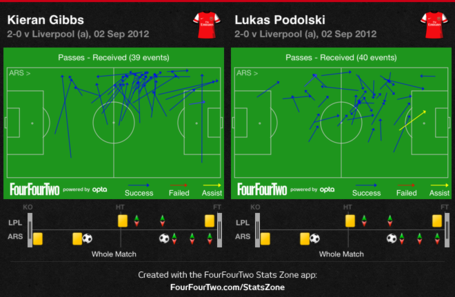