Arsenal's defeat to Chelsea has prompted questions to be asked of Arsene Wenger's team; namely, are the defensive changes that they apparently made enough, and can they score enough goals?

Share All sharing options for: More Questions After Chelsea Defeat

After their excellent performance last week against Manchester City, Arsenal's defeat at home to leaders to Chelsea will be a major setback; certainly, it's a game that they made enough chances to draw or even win, and, given the nature of the two goals that were conceded, there is an element of Arsenal throwing the game away that will have greatly annoyed Arsene Wenger and Steve Bould.

Ah, Steve Bould. Since he was praised by the media far and wide, Arsenal have failed to keep a cleansheet in all competitions. They have conceded three goals from set pieces in their two games, and looked very flaky against the Chelsea attack. This is not to blame Steve Bould, but it is interesting to see that many are blaming Arsene Wenger for this rather than Bould. Frankly, both are responsible; Wenger will not give Bould free-reign with the defence, because otherwise it would create a broken team. There are elements of the defensive shape that will need to be sorted out on the training ground, because it has direct consequences on Arsenal's attacking game.

Arsenal's defensive strategy this season is to press initially, and then drop back into two banks of four, and then, win the ball and counter attack. It's broadly similar to the way the Invincibles swept away all before them, but the Invincibles shape was far better; Arsenal seemingly still haven't got the hang of this new style of defending. Too often, Arsenal's back line drops too deep and invites pressure; this happened against Southampton, Montpellier, Manchester City and it happened yesterday. 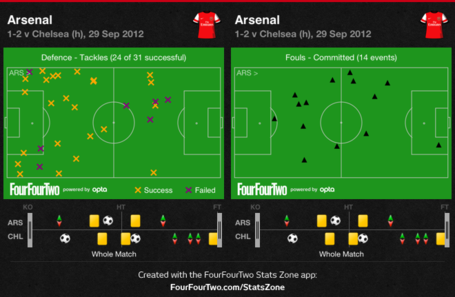 A second problem is the gap between the midfield and the defence; yesterday, it was too large and Chelsea's creative players, namely Eden Hazard and Juan Mata were getting into large gaps. This game them space to create and run at Arsenal's defence, and is why they won a series of fouls in dangerous positions. If Arsenal's new defensive strategy is to work, the space between the midfield and defence has to be constricted, otherwise it'll be too easy for teams to dominate possession and create chances. To do that, either the midfield has to drop back 5-10 yards, and constrict space, or, Arsenal's back four has to step up more, and defend in the way they did against Barcelona in February 2011. They did neither, and it led directly to one Chelsea goal.

Arsenal seemed very flat in the first period of the game, and their passing game was neither quick nor sharp. One reason for that was that Chelsea, through Oscar, pressed Mikel Arteta, and made it difficult for Arsenal to start attacks through him. Usually Arsenal bring the ball out through the right side, with Lauret Koscielny (in this case) or Carl Jenkinson passing to Arteta. With Oscar doing an excellent job marking him, though, Arsenal found this route cut off, and Arteta only made 26 passes in the first half, well below his usual average. Thus, Arsenal had to attack through the wide areas, which limited Cazorla's influence through the middle. In the second half, Chelsea, with a lead to hold, sat back more, and Arteta gradually became more influential, and started pushing Arsenal forward. With Alex Oxlade-Chamberlain his partner in the double pivot, this made Arsenal susceptible on the break. 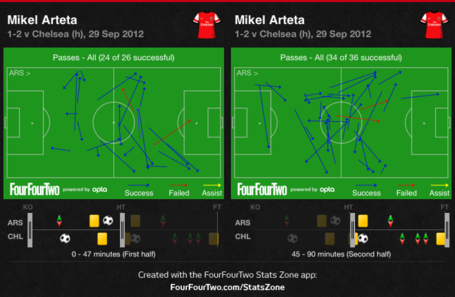 Another concern for Arsenal is that teams are starting to figure out, and are trying to stop, the devastating left-handed combination of Kieran Gibbs, Lukas Podolski and Santi Cazorla. With Juan Mata poor at tracking back, many had thought this could be an avenue for Arsenal to exploit, but with Ramires playing on the right of Chelsea's three man midfield, Chelsea had a player who had enough energy to cover the right hand side, and enough defensive nous. Ramires made 5 tackles and 2 interceptions, and like Manchester City did last week, forced Lukas Podolski wider, and to the periphery of the game. This made Oxlade-Chamberlain the key player of the first half; he was the Arsenal player who had time and space on the ball, and he created two excellent chances from the flanks. That made the arrival of Theo Walcott odd; he wasn't the sort of player to break down a deep-lying defence, and he would've been the player with space until Ryan Bertrand came on. 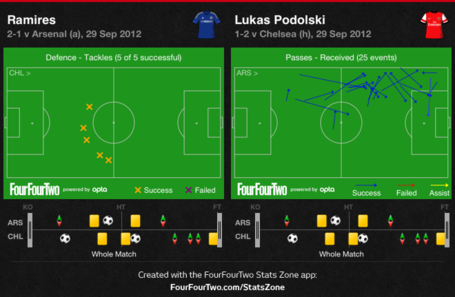 Ramires' play also had affected Santi Cazorla; with Cazorla looking to link up with Gibbs and Podolski, his influence, especially in the second half when Chelsea dropped deeper, and John Obi Mikel marked Cazorla, was very little. 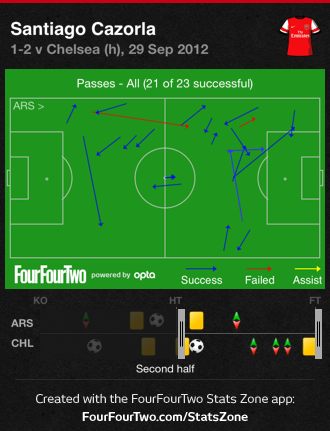 Clearly, Arsenal are not yet the finished product. They still could've earned a draw, but the defensive shape will need to be worked on, as will Arsenal's build up if Mikel Arteta is marked out of the game; without him, Arsenal have issues bringing the ball out, and perhaps he and Aaron Ramsey needed to switch to draw markers and create space. Finally, if Arsenal are to play a deep line, playing Laurent Koscielny and Thomas Vermaelen, two defenders who like to win the ball back quickly, will be a concern; it took the two several games last year to form an effective partnership, and even then, Arsenal still conceded three goals at home to Norwich City.