If Manchester City was Arsenal's first big test of the new season, then they have passed it with flying colours. For many parts of the game, Arsenal outplayed the Champions, at a stadium where they have gone 31 games unbeaten, winning 18 out of 19 last term. Even after going behind to a soft goal, they showed a resilience to get back into the game, with Laurent Koscielny's volley a deserved equaliser. What's even more impressive is despite the fact that Carl Jenkinson and Kieran Gibbs started pushing further up, Arsenal didn't concede on the counter; indeed, they largely prevented City from creating chances in the last quarter of the game.

Arsenal were the quicker of the two teams to settle, with Aaron Ramsey's inclusion allowing Arsenal to win the early battles in a frenetic midfield. His role was quite similar to that of Yossi Benayoun's at the tail-end of last year, with the Welshman adding balance and a creativity on the right of the midfield. He also enabled Arsenal to outnumber Manchester City in the midifeld zone, allowing Arsenal to dominate possession and create three excellent goal-scoring chances in the first half.

With a more creative outlet on the right side, Arsenal attacked down the right in more even terms with the left than they had away at Liverpool; against Liverpool, 31% of Arsenal's attacks were down the right, compared with 42% down the left; here, it was 36% to 39%. The downside to this was that the triumvirate that had provided Arsenal with such success prior to today--Lukas Podolski, Santi Cazorla and Kieran Gibbs--was much less prominent, though Gibbs and Cazorla had excellent games. Podolski was fairly anonymous; because Ramsey came inside more, Podolski, to give Arsenal balance, stayed further out wide, and was kept quiet by Pablo Zabaletta, who had a solid game. 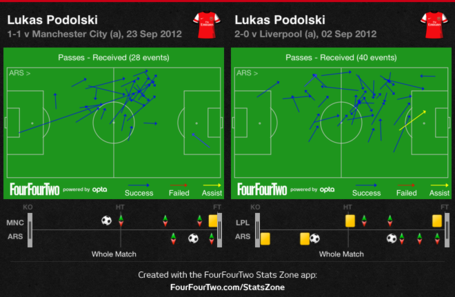 Ramsey was quite possibly the key player in Arsenal's midfield; he was the free Arsenal player in the midfield, with Javi Garcia trying to occupy Santi Cazorla, and was able to combine with Cazorla and Arteta and get into free space. It was a quick exchange of passes between Ramsey and Cazorla in the middle that led to the throughball for Gervinho, and, after Diaby went off, Ramsey went into the middle and used his outstanding energy to push Arsenal up the field. 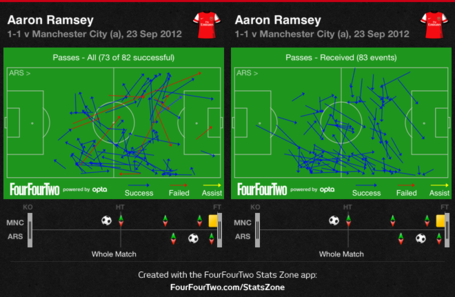 Unlike the game against Liverpool, Arsenal dominated possession and were a little more proactive when defending; they didn't drop as deep as they did at Anfield, or against Montpellier during the week. This enabled them to still be threatening on the counter attack but also helped Arsenal control the game. When Arsenal didn't have possession, they dropped into their usual, for this season, two banks of four, and Manchester City found it difficult to play through Arsenal, being forced wide for most of the first half. When Arsenal dropped deeper, though, they invited pressure, and it was this dropping deep that forced the corner from which Manchester City scored. 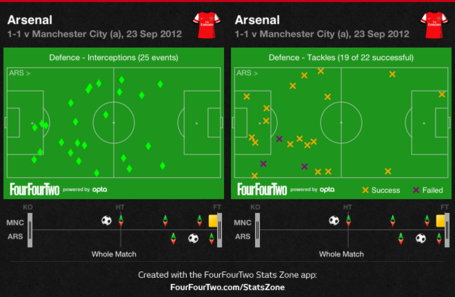 Roberto Mancini was clearly unhappy with the way Arsenal controlled the game in the first half, and he pushed Yaya Toure forward; this not only made it harder to Arsenal to build up play, but it also gave City a greater presence between the lines, and Manchester City were on top for the first quarter of the second half. Arsenal gradually began to push forward, with Carl Jenkinson especially becoming more of an attacking force. At this point, it looked as though Arsenal might get overrun, but when Ramsey moved into the middle, the need for Arteta to push forward ceased, and the Spaniard held position, meaning that Arsenal had enough cover to defend the counter attack. 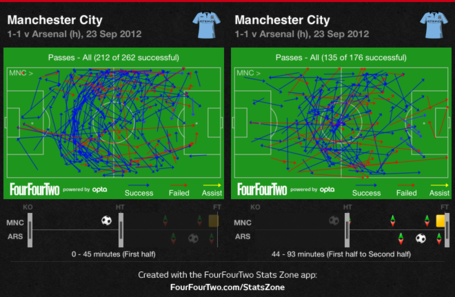 At this point, City began to drop deeper, and Arsenal's lack of a focus point hurt the team. Gervinho's lateral movement meant there wasn't a player occupying City's centre backs, which can usually be taken advantage of by outside to in runs, but Ramsey isn't the type of player to make those runs, and Podolski was finding it difficult to get free of Zabaletta. The pressure placed on Cazorla also made it harder for him to play the telling pass, which is why both Arteta and Diaby pushed more forward. The arrival of Giroud changed the game; Arsenal had not only an aerial threat, but also someone to play around, and City, mindful of this, and of the pace of Theo Walcott, dropped deeper. That usually isn't good news for Arsenal, and they didn't find a way to break through in open play, but it meant that Arsenal were able to commit more numbers forward. 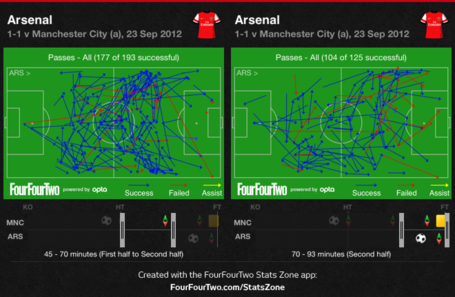 All chalkboards courtesy of Statszone