Arsenal hit the road again, this time to the Eastlands, after a quick turnaround from their Tuesday night Champions League match in Montpeiller for a Sunday afternoon match against last season's champions, who they are currently tied with on points (8), but ahead of them in the table in 3rd place thanks to goal differential. While still relatively early in the season, any match in which Manchester City are the opponents is significant for a couple reasons. One, if Arsenal harbor any sort of title aspirations this season (and for many seasons to come), City has clearly demonstrated that any club wishing to lift the trophy at the end of the season must get past them first. They rightfully won last season, regardless of how incredible the finish was, and they will always possess the resources to reload their squad how they see fit.

Which leads into the second reason this match has a bit of significance to it: City possess an unhealthy obsession with buying Arsenal players; even our one-time captain Patrick Vieira is City's "Football Development Executive" (which is a fancy title for what he's tasked to do: tap up our current players on the regular). Arsenal supporters showed Samir Nasri no mercy last season - both at the Emirates and at the Etihad - and there's little expectation the away supporters will silence themselves on Sunday if Nasri is on the pitch (edit: he's out).

City come into this match on the heels of a highly-charged and fast-paced Champions League encounter away to Madrid on Wednesday night. Thus far in the early season, City has let slip six EPL goals in four matches, and another three allowed against Madrid pushed their overall competitive goals allowed total to nine in five matches. Joe Hart was critical of the team's defensive performance after the match, and upon hearing his public critique of their match, Roberto Mancini basically told him to STFU and concentrate on goalkeeping. How City learn from their match in the mid-week, and how quickly they're able to regain their super-human defense (they have yet to register a clean sheet this season, and that's with a fixture list that's included Stoke, Southampton and QPR) and, most importantly, how they put these continual off-the-pitch distractions and mini-dramas behind them and play as a cohesive unit is anyone's guess. One thing is for sure, Arsenal cannot approach this match lightly and expect City unprepared and distracted.

Arsene Wenger revealed today during his weekly press conference that Wojciech Szczesny will miss 2-3 weeks after re-aggravating his ankle injury in last week's match versus Southampton, and Wenger even went as far as to insinuate that it will be hard to sit Mannone when Szczesny returns to full health if Don Vito continues on the run of form he's been on this season. Otherwise the squad is in good health, and John Cross reported via his Twitter account the same squad that made the trip to Montpellier will make the squad this Sunday. 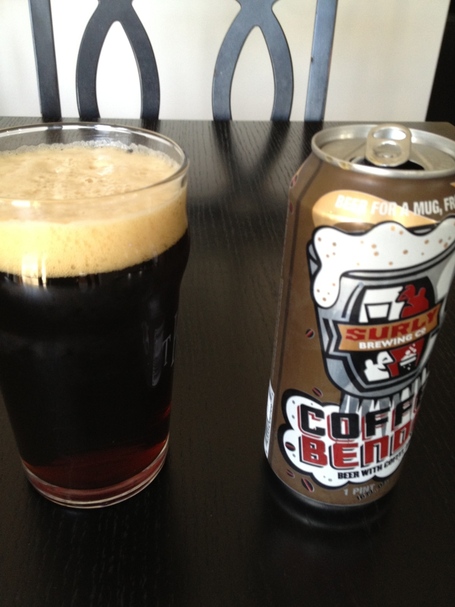 Once. It. Hits. Your Lips. It's. So. Good. Yes, I might be an unabashed homer for all beers Surly, but rightfully so. Surly Brewing Company is one of the best things about living in the Twin Cities, and if you're a beer geek who loves a good beer festival, you'd be hard-pressed to find a better one than Darkness Day that Surly hosts each late-October. Coffee Bender might be, along with Furious, their IPA, their best year-round offering. Surly Bender is their excellent brown ale, a style I love (as well as sour brown ales). Of course, Surly being Surly, they take what is already an excellent beer and, well, I'll let them describe it to you:

Coffee Bender refreshes like an iced coffee, is aromatic as a bag of whole beans and satisfies like your favorite beer. The Surly brew team has developed a cold extraction process that results in intense coffee aromatics and flavor bringing together two of our favorite beverages. Your only dilemma will be whether to finish your day or start it with a Coffee Bender.

What's even better is they take Coffee Bender and create Moe's Bender, a one-off beer they only wheel out for special events which they infuse Coffee Bender with vanilla and cocoa that gives everyone within ten feet of it a mouth orgasm.

Prediction: Manchester City 2-2 Arsenal. I know we've been on a decent run, but City have plenty of firepower at their disposal to test both of our in-form, but young, wide backs and keeper. In the past couple seasons, walking away from a visit to the Eastlands with a draw was nearly a cause for relief, so it stands to reckon that anything less than a draw this season there, given how it's started, wouldn't be an ideal result. Trust me, it is. There's very little chance City finish outside of the top four in the league and while only gaining one point isn't ideal anytime, limiting City to one point as well is just as big of a result. Additionally, Arsenal have to turn around after Sunday an in-week Carling Cup match next Wednesday and then face off against another title contender, Chelsea, at home on Saturday. Obviously a win on Sunday against City would probably make my pants spontaneously fall off, however a draw would at least get the top button popped and belt buckle loosed.