Share All sharing options for: Liverpool vs. Arsenal match thread

Arsenal travel up north for today's big match against the Reds of Liverpool, possibly the only fanbase more grumbly than Arsenal's during Friday's transfer window! Arsenal's first two matches this year have been nil nil draws, but that streak is likely to end this morning, because Liverpool are hilarious at giving goals away, but also pretty darn good at scoring them, too (like the two they scored against Manchester City--those were both pretty good).

Come with us after the ol' jump for more!

Arsenal, meanwhile, will be without the services of Wojciech Szczesny, whose rib is still giving him an ouchie. This, in addition to the ongoing injury / reluctance to be used by Arsene Wenger-ness of Lukasz Fabianski, means that we're looking at Don Vito Mannone in goal again this morning. Fingers crossed.

Here are the actual lineups:

Community member PSUKegreen made a lineup chart in photoshop; just imagine the Ox where Walcott is, and Mert where Koscielny is: 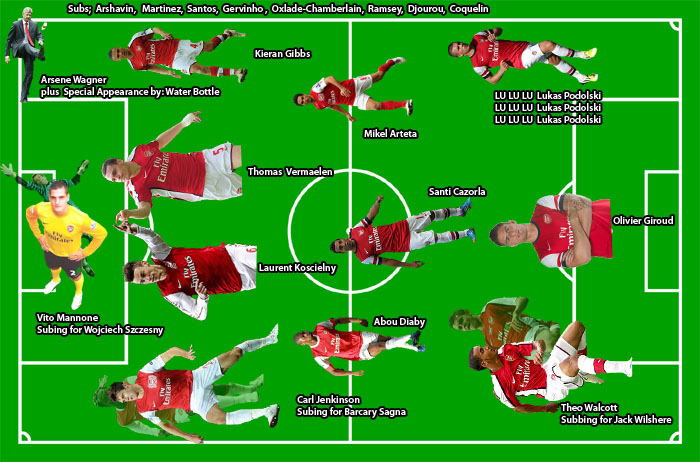 Feel free to comment on all of the action, but remember: always use a subject line, limit image heights to 300, no links to illegal streams, and above all, be kind and supportive to one another! Thank you, and enjoy the match!