Share All sharing options for: FIFA: Cazorla signs for Arsenal

So it appears that Arsenal.com are holding out on us. FIFA.com (possibly accidentally) have announced the signing of Santi Cazorla, by Arsenal, in a story about something else. They don't have a full report on the signing, but it appears that the good folks at the international governing body are a step ahead of the club's website on the story.

FIFA posted a few paragraphs on another Malaga player, Venezuelan forward Salomon Rondon, being sold by the Spanish club, which is interesting in and of itself as he's gone to Rubin Kazan - there was rumored interest in him from Chelsea and Tottenham Hotspur, though what level that interest was remains in question. But really in the greater sense, Kazan's transfer business doesn't interest me until they're drawn in Arsenal's Champions League group. But the story's last paragraph caught my eye.

Here is the front page of Arsenal's official website, at the time of writing: 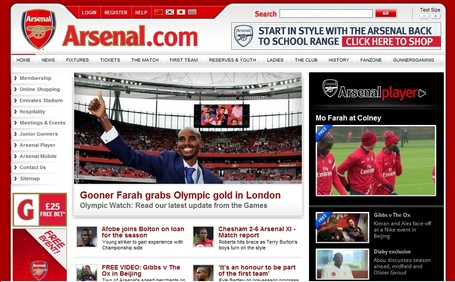 So yeah, nothing about Cazorla there. I would expect that the dot-com wants to get the picture slideshow and videos and official announcement together and post it all at once, and that it's planned for tomorrow rather than a Sunday evening when everyone's watching the Olympics. Unless they're just wrong, which is possible, but doubtful. This is probably a silly mistake by FIFA (who would have guessed?!) and we'll all have a big laugh about it tomorrow, when we have a bunch of pictures of Cazorla in an Arsenal kit to fawn over.