While the match itself may have been boring, Sunday's matchup between Stoke and Arsenal was an interesting battle between two very different footballing styles. Unlike most encounters at the Britannia, Arsenal didn't look intimidated by Stoke's physicality, but said physicality, and the very direct, high-tempo style of Stoke means Arsenal usually have to slightly change their game plan, especially with the ball.

The key problem for Arsenal when traveling to the Britannia is defending the innumerable set pieces that result in the ball being flung into the penalty box. Until today, Arsenal had conceded goals in all of their trips to the Britannia since Stoke became a Premier League team, but today, with Per Mertesacker in the side and Abou Diaby protecting Vito Mannone on long throws, Stoke rarely threatened. In open play, Arsenal rarely pressed as a unit, but kept a fairly high line, which prevented Stoke from pummeling the box. When the ball went into deeper wide areas, Arteta and Diaby went to close down the crosser, but as a whole, Arsenal stood off when they didn't have a ball, but kept the gaps between the lines fairly small, making it harder to Stoke to play straight through the middle unless they went long.

When Stoke went long, they were rarely successful; Arsenal won most of the aerial duels in and around the penalty box, but when they didn't win the ball, Arteta was usually there to recover possession; with Diaby and Arteta recovering the second ball in Arsenal's half. 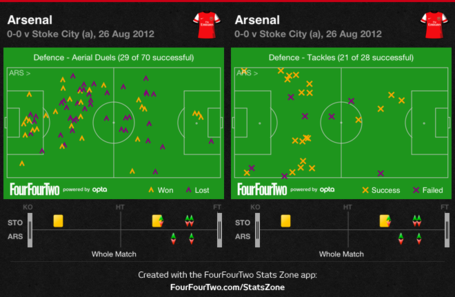 Olivier Giroud was named as the central striker today, and showed good movement again, but only had two shots from open play; one was from the extreme left of goal, and the other was from 40 yards as he tried to lob Asmir Begovic. He still had a good game; he made runs behind the Stoke centre backs, but rarely got the ball in attacking areas. He also allowed Arsenal to play out of the pressure, offering a target to play around, as they did several times, especially in the first half. Giroud received the same amount of passes as van Persie did last year, but received a lot more direct passes, helping Arsenal, even though he didn't score. All he needs to do, it seems, is consistently get the ball in goal-scoring areas, which he hasn't yet. 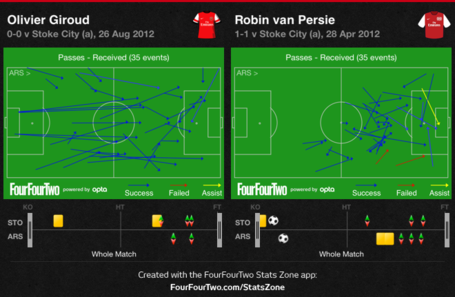 Giroud's height was invaluable because Stoke's pressure often prevented Arsenal from building from the back; unlike Wojciech Szczesny last week, Vito Mannone had to go long with most of his kicks as Walters and Crouch made it dangerous for Mannone to play out to Mertesacker and Vermaelen. 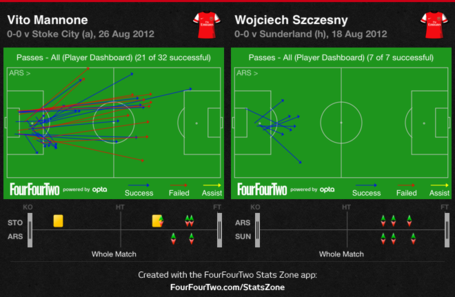 Arsenal were again facing a disciplined defensive side; when Arsenal got the ball down, Stoke dropped 8 men behind the ball, making it difficult for Santi Cazorla and others to play through them. They were also able to effectively cut out Arsenal's wide attacks, with Arsenal winning only one take on in the vicinity of the penalty box. Arsenal used the wide areas far better this week than last, with Kieran Gibbs was far more attacking than he was last weekend. He was allowed to go forward by Lukas Podolski playing a very narrow role off of Olivier Giroud, while Gervinho gave width on the right, giving Arsenal balance, and meaning that Carl Jenkinson didn't have to get forward as often. This gave a cautious Arsenal numbers at the back in case of a Stoke counter attack, and may have worked, had Gervinho not had such a poor game. 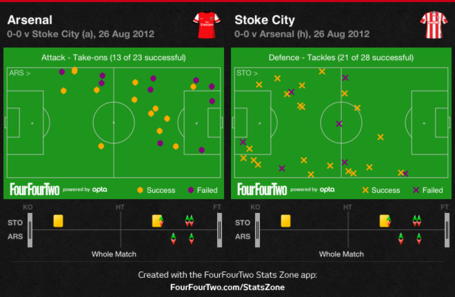 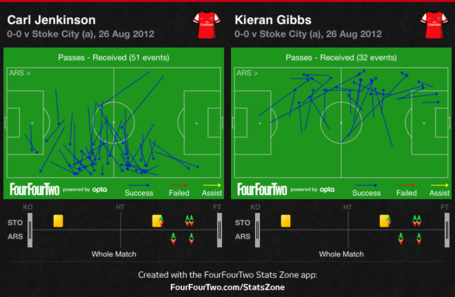 Arsenal's problem, though, is still chance creation. Much like last week, Arsenal had very few passes in and around the penalty box, meaning that most chances will be created outside the box, and have a lesser rate of success. With Gervinho having a poor game on the right, and Kieran Gibbs failing to cut the ball back for Podolski on the left, Arsenal's chances of scoring are further affected. The attacking players are seemingly getting into good positions, but they haven't yet really been found on a consistent basis. As Arsenal continue to gel, this chance creation problem, and thus goal-scoring problem should be alleviated, as Arsenal have an excellent playmaker and strikers who make good runs. Lukas Podolski was very good from the left, driving inside; with a little more work on the training ground, Arsenal should be a fine attacking team. 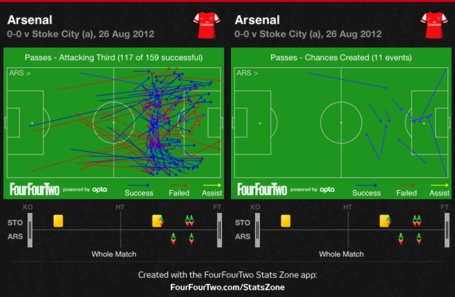 Unlike last week, there was more balance against Stoke. As already said, Lukas Podolski played very narrowly, allowing Kieran Gibbs to get forward, while Gervinho played wider on the right. Arsene Wenger may still look for a creative wide player, but a majority of Arsenal's play on Sunday was promising, and Wenger's frustration at getting only a point, unlike last year, shows that he thinks his team could've won on Sunday. The balance seems key; it was last season, when Yossi Benayoun's inclusion made Arsenal look a far better team, and could prove to be crucial again this season. 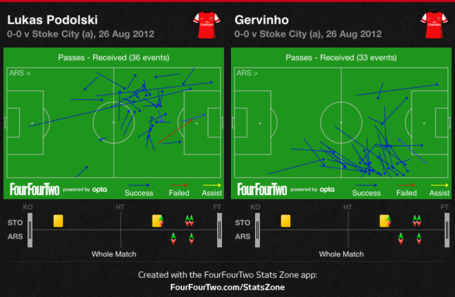