Share All sharing options for: Arsenal 0-0 Sunderland: Arteta The New Holder, Fullbacks Need To Get Forward

Just as they did last season, Arsenal started the new campaign down two key players and with a goalless draw with a club from the Northeast. This time, though, Arsenal showed more promise than they did a year ago, with Santi Cazorla impressing, and Mikel Arteta doing a superb job as the deepest midfielder.

Arsenal clearly dominated the match on Saturday; they had 71% possession, and outshot Sunderland 23-4 (with the 4 Sunderland shots coming in the first half). Aside from a few openings created by Santi Cazorla and Gervinho, though, Arsenal didn't have many clear cut chances, as they lacked sharpness and balance. Sunderland's 10 men behind the ball strategy also hurt Arsenal's attack, and made it very hard for Arsenal to play quick one-twos on the edge, and inside the penalty box.

On the other side of the ball, Arsenal were rarely troubled by Sunderland's attacking play, though Arsenal's defensive strategy has changed from the tailend of last season. Instead of a high-pressure game, Arsenal looked to win the ball quickly, and, if not, drop back to make it hard to break down (and also easier to counter-attack, as it provokes the opposition to push forward). The problem, though, is that Sunderland rarely pushed forward, showing a real lack of attacking ambition. 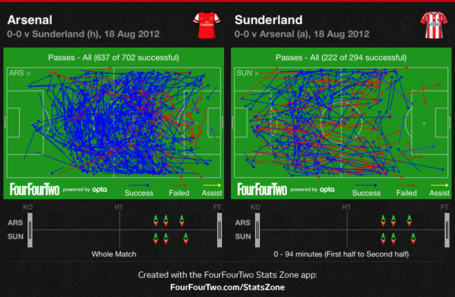 One reason Arsenal weren't able to break down Sunderland was the lack of attacking width, especially from the full-back areas, as discussed by Gingers4Limpar. If one looks at the chalkboard above, Arsenal had very little width in the final third, which has been a constant criticism of the way Arsenal plays. It was again apparent here, as Sunderland were able to double up on Theo Walcott and Gervinho, making it difficult for them to contribute. Even when Gervinho was able to burst into the box, the weight of numbers that Sunderland had back made it difficult for him to score or create chances; with better movement from the front players and fullbacks, space could've opened up. 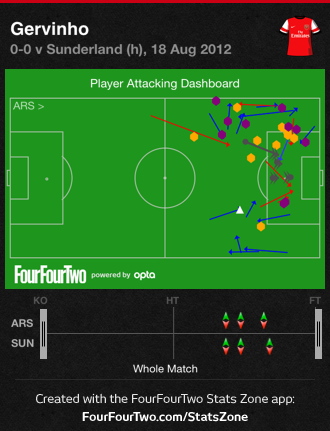 The way Arsenal used their fullbacks was perhaps out of nervousness about Sunderland's counter attack--but with Arteta so deep (we'll get to that later) and Mertesacker and Vermaelen back, Arsenal had enough cover to deal with Sunderland's 4-5-1, and Arsenal could've pushed Carl Jenkinson and Kieran Gibbs, who, admittedly, went forward a lot more than Jenkinson, further forward. Faced with a deficit and a similar defensive strategy, Manchester City pushed their two fullbacks, Pablo Zabaletta and Gael Clichy, much further forward than Arsenal did, allowing Manchester City to open up space and create chances. 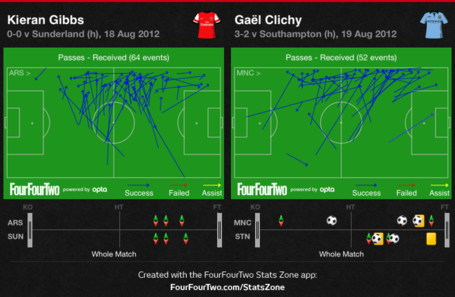 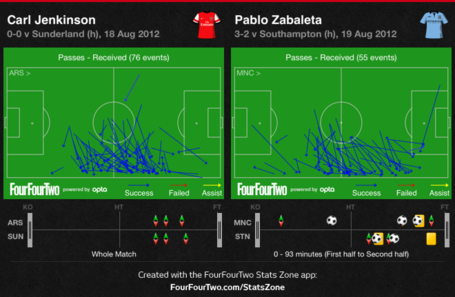 There were two areas of concern for Arsenal fans prior to the match: How would Arsenal cope without departed players Robin van Persie and Alex Song. Without Song, Arsenal played fairly well (though they could've perhaps used his creativity). Mikel Arteta took it upon himself to be the deepest midfielder, generally not moving far from the centre circle, protecting the back four. He also was Arsenal's main distributor, collecting the ball from the back four and looking to spread passes wide and to Santi Cazorla, with whom he established an excellent partnership, with Arteta finding Cazorla 29 times--the greatest passing combination on the day.

While Arteta did drop deep last season, and often covered for Alex Song, his role on Saturday was very different; he was the sole holder, with Abou Diaby making driving runs from midfield. Whether this continues will be interesting; Arteta's positioning was excellent, as he made 4 interceptions, and he rotated well with Thomas Vermaelen when the Arsenal captain bombed forward. His physical strength, when compared with Alex Song, though, must come into question. He only won half of his tackles, and although he won a higher percentage than Alex Song did last season, Song won his tackles on a more frequent basis. With Nuri Sahin set to join Arsenal, it'll be interesting to see whether Wenger plays the two in a double pivot, giving Arsenal excellent ball retention and creativity, or, goes for a more physical presence, such as Etienne Capoue 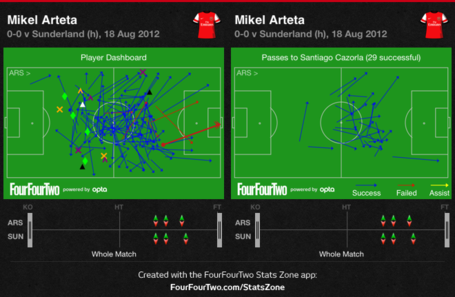 Finally, we can look at the performance of Arsenal's two strikers, Olivier Giroud and Lukas Podolski. Podolski's movement was encouraging; like van Persie, he came deep and participated in play, creating space ahead of him. That space, though, wasn't well taken by Theo Walcott, Gervinho, Santi Cazorla or Abou Diaby, suggesting that Arsenal lacked a little bit of sharpness and that the team still needs to gel together. Podolski could also improve, making more runs into the box, with Arsene Wenger saying as much:

I see him as a centre forward but he has some work to do, to change his game a little bit, make runs in behind to protect the ball and move around the box,

Olivier Giroud was much more direct, and made an excellent run to receive Santi Cazorla's pass; such runs suggest he can replace Robin van Persie's goals, especially with Cazorla giving Arsenal the creativity they missed last season. 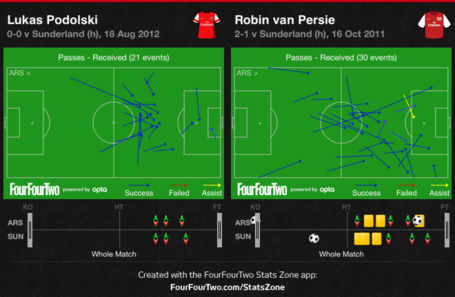 Despite the goalless draw, there were a lot of positives for Arsenal. If the team can gel more over the coming week, they should be in good shape for the trip to the Britannia on Sunday.