Hey, this Aaron Ramsey guy might be good after all!

I'm aware that delving into evaluating Aaron Ramsey is a very strong subject for some. I'm also aware that going about this is a somewhat emotional manner can also be problematic, yet, I feel like it's the best way for me to talk about Aaron Ramsey. We're all aware of his faults; the finishing was less than impressive, the way Ramsey could slow down a counter attack and pass backwards or square could also be irritating. There is no denying that Ramsey tailed off at the end of the season, yet, that doesn't mean one should write him off. Iain Macintosh was shocked that Ramsey is so disliked by Arsenal fans, and, it did seem that he became a blame figure at the end of the season when things went wrong, kind of like (cross-sport reference alert) Carlos Beltran for the Mets.

The main problem for Ramsey, I feel, is that for most of last season he was continually, if sometimes subconsciously, compared to Cesc Fabregas by his teammates (Robin van Persie's alleged thoughts being here), and the fans. Hell, I compare Ramsey to Fabregas, which is unfair, because Cesc Fabregas is one of the best midfielders in the history of Arsenal Football Club and Aaron Ramsey just played his first full season after breaking his leg. Even that comparison sounds damning, and I think that's one thing that we have to realise when we think about Aaron Ramsey; he's not Cesc Fabregas, and, probably never will be. That doesn't mean Aaron Ramsey's a bad player though; it just means he's not Cesc Fabregas and the sooner I, and others can stop thinking of him on those terms, the sooner we'll appreciate his own qualities.

One thing about Ramsey that I think is quite underrated is his battling qualities. He's fairly strong in the centre of the midfield, stronger, perhaps, than Fabregas (there I go again! Sorry, last time) was at the same age, and quite often Ramsey will create chances or keep the ball in difficult situations by being stronger; he very rarely gives up and, after Robin vol de Mort, he probably ran the most last season, making his nickname of Rambo seem appropriate, at least to me.

The running aspect seems quite important to Ramsey's game. Unlike Fabregas (seriously, the last time), Ramsey doesn't seem to magically receive the ball in a 10-yard radius. Teams are more willing to close him down and, at this stage, he's less able to create space through movement, though, at times, he was excellent at doing that. Thus, he needs to drive into gaps, between players, to create space, something that, I think, he was less able to do when he started burning out approximately in late January. 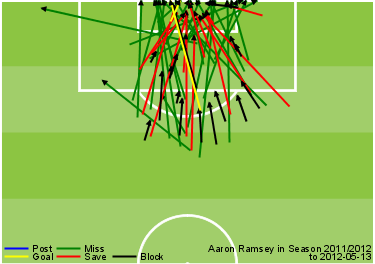 Aaron Ramsey's shot map shows that he gets into good scoring positions, taking up space that's created by forward movement; all he needs now is to work on the finishing and he could be a 10-goal a season man easily.
Thanks to OPTA Sports and Orbinho for the picture.

That inability to create space made Ramsey seem more of a sideways, uncreative player, something that he seems to revert to when things aren't going his way. That's not necessarily a bad thing; although he can be too quick to go backwards, it's better to see him try to keep the ball and start a move elsewhere. Ramsey seems very much to be a knitter of play, someone who brings the defence and attack together, and thus, more of an instigator than a creator. Last season, he was relied upon to be a creator, something that only happened once Jack Wilshere went down with injury; until then, the creative duties were more evenly split, relieving pressure on Ramsey. At times, though, he showed that he could be the creator, with really good performances against Stoke, Chelsea and Wolves last season, and good performances at other times. He still wanted to be an instigator, though, which is why he had such a high pass number, and is also one reason why he put so many miles on his legs.

Once he burnt out, though, there seemed to be less spark in Ramsey's play; he seemed to find it more difficult to play extremely creative passes, which is why most of the chances he created in the second half saw longer shots and more defenders in front of the player receiving the ball, indicating that he wasn't creating as good chances from as good positions as he had been. Unfortunately for Ramsey, this wasn't a non-pressure situation where Arsenal could reduce the pressure on Ramsey; Arsenal had effectively no other fit-midfielders, and were going through a bad patch of form.

Consequently, Ramsey began to suffer abuse, both on the terraces, and on Twitter, and he seemed to lose confidence in his ability to be creative, fearing the loss of the ball. From then on, Ramsey seemed more timid in his passing, though, his runs into the box were still pretty good-a feature that makes it likely he's a regular goal-scorer in future. Everything, though, seemed to drag Ramsey down; the abuse, the loss of confidence, and then losing his place before succumbing to injury.

Because of that, people forget that Ramsey was truly excellent in the first half of the season, and, despite his poor second half of the season, the amount of good chances he created was nearly on par with Tomas Rosicky's. Given that this was Aaron Ramsey's first full season since that awful broken leg, there's a lot of things to be positive about Ramsey; his ability to battle in the midfield, his ability to retain the ball, and create play, and his ability to get into the box. He's nearly there as a player, and, had he been better managed last season, and not run into the ground, maybe he would've finished the season better. All that needs work, I think, is his final ball; a few more quality created chances and a few more goals would do a lot to put him back in the hearts of many Arsenal supporters, and convince him that he can instigate play, score and create. I have no doubt that he can do it; after all, compared to a broken leg, this seems easy.