Arsenal's success in Europe: is it underrated?

Share All sharing options for: Arsenal's success in Europe: is it underrated?

The lack of silverware for seven seasons at Arsenal despite relative consistency of performance has led to many debates among supporters and journalists about how to define success for a "blg club" or a "top club" (also debatable terms) like Arsenal is (or isn't, depending on one's definition). Trophy-wise, the period from 1997-98 until 2004-05 was basically the most fertile period, yielding three Premier League titles and four FA Cup wins in eight seasons. 2003-04, of course, was the year of the "Invincibles", who didn't lose a single match for the entire league season, that run stretching to 49 league matches before succumbing to Manchester United. That team is rightly considered to be one of the greatest in English football history.

However, one thing they are not considered to be is one of the greatest in European soccer history, particularly with regard to the Champions League, where, despite making it as far as they ever had in Europe's top competition, Arsenal crashed out in the quarterfinal against Chelsea and Wayne Bridge. That was to represent the club's furthest advance in Europe to date (unless one counts their loss in the UEFA club final to Galatasaray in 2000-01, which certainly one could argue), despite its relative dominance of the English scene since 1998. That European record is often overlooked when supporters yearn for the days of Vieira, Bergkamp, Henry, Pires, and Keown, and to a certain degree, that is of course understandable. However, the idea that the club was far more successful then has become so pervasive that supporters often overlook Arsenal's record in Europe since the end of their domestic dominance. Arsenal have been one of the most successful clubs in Europe's top competition even since the breakup of the Invincibles.

Follow below the jump for a look at what led me to this conclusion.

I started from the assumption that one could define the starting point of "success" in Europe as reaching the knockout rounds of the Champions League. This may seem like an overly strict definition, since many clubs rightly feel successful upon qualifying for the group stages, particularly from Europe's less-fancied footballing nations. On the other hand, the definition may seem too wide in scope, given that "success" is often understandably correlated to one thing: silverware. One could go back and forth all day about this, so I selected what I thought was a reasonable middle ground.

In order to track how teams did, I simply went to the wikipedia entry for the Champions League for each year that Arsene Wenger had been manager of Arsenal (starting in 1996-97). I counted the amount of times each club had appeared in each stage of the knockout rounds. Up through 2002-03, the knockout rounds started at the quarterfinal round (eight teams); starting in 2003-04, there was a round of 16 added. Also, from 1999-2000 to 2002-03, there were actually two group stages, with the top teams from the first stage being re-drawn into new groups for the second group stage. I did not drill down that far, though, to track how teams did in the group stages, mainly because the size of that task is significantly larger (although I may do it some day), and also because reaching the group stage is so de rigueur for many European teams that it falls outside the scope of "success" as I've set it in my mind.

Bearing in mind the biggest change in format for my purposes, the expansion of the knockout rounds from eight to 16 teams in 2003-04, I broke the tracking up into two portions, divided on that line. To reward teams for progressing further into the tournament, I initially thought I would just weight each successive round linearly, giving 1 point for a quarterfinal, 2 for a semi, 3 for a final, and 4 four winning. At the suggestion of Graham MacAree, SBN Soccer Editor and statistical shaman, I instead weighted the rounds along the lines of prize money, for which I had to use this year's prizes, as no other data was available. Admittedly, this assumption is a bit crude, but for now, bear with me. 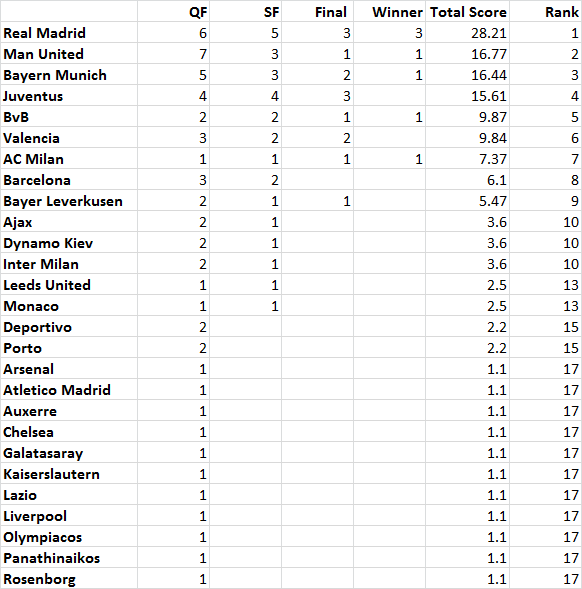 So, as one can see, Arsenal's lone quarterfinal appearance in 2000-01 against Valencia has them pretty squarely at the bottom of the table, a table dominated as one would expect by Real Madrid teams of Raul, Roberto Carlos, and Zidane. After the Champions League expanded to a knockout round of 16, the table looks a little differently, obviously including a much longer list of teams: 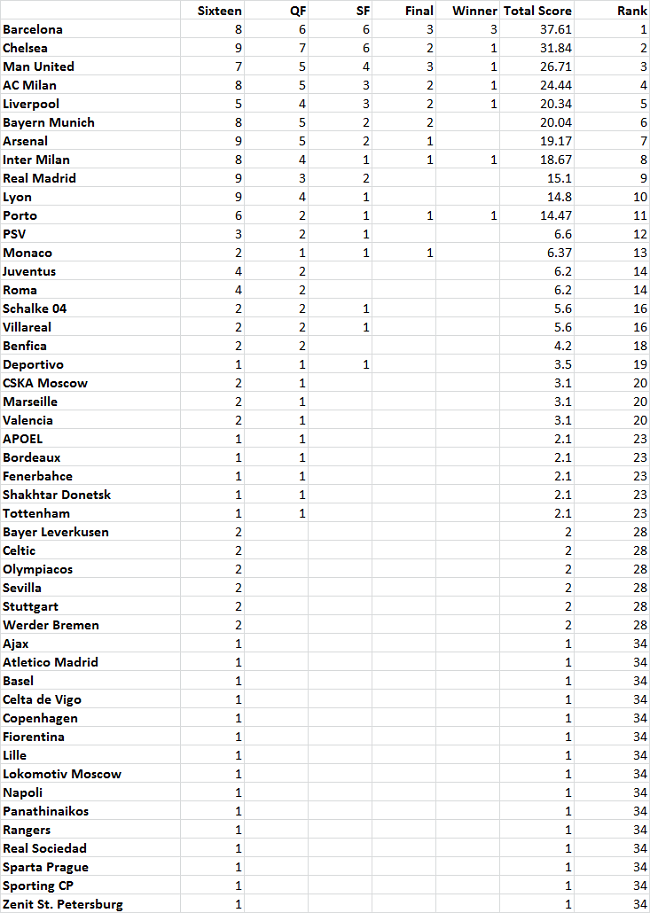 Introducing that extra round seems to have not only increased the number of teams in the running, but also introduced a little bit of parity to the top of the table. What is important to note as an Arsenal fan is that, despite a lack of trophies, strong performances in the Champions League beyond the group stages (which Arsenal have not missed since 1996), including a finals appearance, two semifinal appearances, and five quarterfinal appearances, indicate that the club has greatly improved its performance on "Europe's biggest stage", which does tend to line up with the belief that the style Wenger imposed upon his young teams starting in 2005-06 was more suited to continental play than domestic. Indeed, among teams who have not won the Trophy With the Big Ears, only Bayern Munich fare better than Arsenal, and only by a tiny bit.

Arsenal are, indeed, a quite successful European club, if one considers the larger picture, ahead of European luminaries such as Real Madrid and Juventus. The lack of winning the trophy has obviously seen them overtaken by other English clubs, but the situation at the club is nowhere near as bleak as some would argue during the past decade. The term "top club" or "big club" will always be up for argument, but there are grounds for considering Arsenal to be at least in the European discussion.