Share All sharing options for: Let's Talk About Andrey Arshavin

On Friday, Andrei Arshavin had his best performance in eighteen months as his two assists helped Russia cruise to a 4-1 victory over the Czech Republic. It was a performance similar to the ones that saw him become a noticeable player, back in Euro 2008, but a performance that was all too infrequent for Arsenal. Many observers have taken this performance and have used it's details, such as Arshavin's positioning, to make the claim that Arshavin failed at Arsenal because he wasn't played in his preferred central role. That, quite frankly, is preposterous; Arshavin played in a left-sided role at Zenit St Petersburg during their triumphant UEFA Cup run, and played in a left-sided role yesterday for Russia, as he did for Arsenal.

Another argument is that Arshavin had a freer role for Russia and Zenit than it did for Arsenal. The facts still call that into question--Arshavin, as shown by the chalkboard below, routinely received passes not just on the wing he was playing on, but he did seem to rotate and combine easier with players like Alan Dzagoev than he did with Theo Walcott. It is noteworthy to point out that some of Arshavin's best football for Arsenal came when playing with Samir Nasri and Cesc Fabregas, two players with whom he rotated and combined with much better than he did with Theo Walcott and Gervinho. Arshavin, at his best, was a combination of playmaker and goal-scorer, which is why he always seemed to play best with players like that--Robin van Persie, Nasri and Fabregas. Gervinho and Walcott, who are much more direct players and worse passers, didn't combine as well with Arshavin, and that may be one reason for Arshavin's severe drop-off. 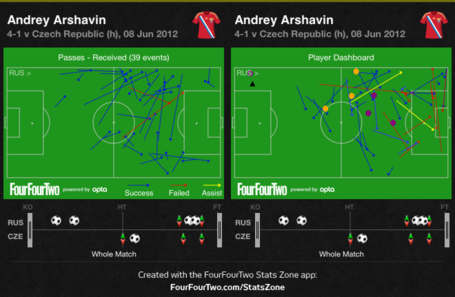 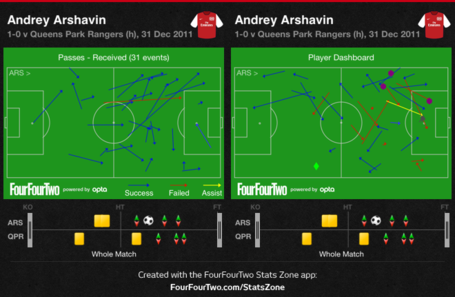 Both chalkboards show Arshavin having the freedom to roam for both Russia and Arsenal, the difference being the amount of space he had, and the speed and rotation and combinations.

Another reason, of course, is the amount of space Arshavin had yesterday. The Czech Republic, already not a great defensive side, had no true holding midfielder to fill the large gap between midfield and defence, pockets of space that Arshavin flourished in. Arsenal, and Arshavin when he was at Arsenal, rarely got that space as Arsenal played a different game than Russia: more possessive than the Russians quick, fluid counter attack, and teams defended much differently against Arsenal than the Czechs did on Friday night. Arshavin also seemed to have lost a little bit of pace that made it harder for him to beat people; his successful dribbles per game went down from 1.58 when he joined Arsenal to .58 last season. With more space against the Czechs, he had more space to beat people, winning 3 out of his 6 dribbles. There was also, crucially, more space to create, and Arshavin used it.

It'll be interesting to see how Arshavin plays against better sides. There is probably some rejuvenation from playing for his country; for example, he's unlikely to be booed when subbed on. That aspect, though, might be overstated in the coming weeks, as Arshavin's poor form of the past year seems down to a decline in his physical abilities and the fact that he's a player that unlike Cesc Fabregas needed much more space than he got. It's a shame, for Arshavin would've fit in with the Invincibles beautifully, but there seems to be no future for Arshavin at Arsenal, even if he has a successful tournament.

Both chalkboards from FourFourTwo's Statszone app; you can download Statszone for the 2012 European Championships for free.